At a shelter in this northern Honduran city, Lilian Gabriela Santos Sarmiento says back-to-back hurricanes that hit with devastating fury this month have overturned her life. Her home in what was once a pretty neighborhood in nearby La Lima was destroyed by flooding.

The 29-year-old woman who never finished middle school had managed to build a life for herself, most recently cleaning COVID-19 wards at a local hospital. Now, having lost everything, she says she sees no future in Honduras at her age and with her level of education.

“I think that in Honduras it is very difficult to do again what it took me 10 years to do,” Santos said. So her plan is to leave for the United States. 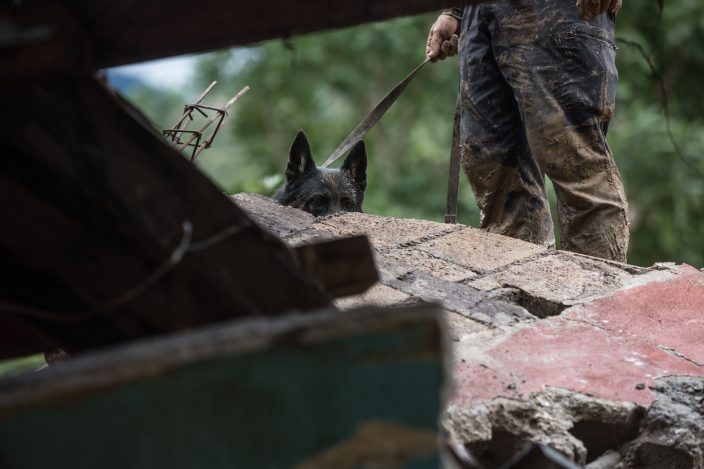 FILE - In this Nov. 7, 2020 file photo, a rescue dog and his handler search for survivors amid the destruction caused by a massive, rain-fueled landslide in the village of Queja, in Guatemala, in the aftermath of Tropical Storm Eta. The storm made landfall on Nov. 3 in Nicaragua but left a path of death and destruction from Panama to Mexico. (AP PhotoEsteban Biba, File)

“If there’s a caravan, I’m going," she said, referring to the large groups of migrants who make the arduous journey together, often on foot.

Inside shelters and improvised camps across Central America, families who lost everything in the severe flooding set off by the two major hurricanes are arriving at the same conclusion.

According to the International Federation of Red Cross and Red Crescent Societies, more than 4.3 million Central Americans, including 3 million Hondurans, were affected by Hurricane Eta alone. Those numbers only rose when Iota, another Category 4 storm, hit the region last week. 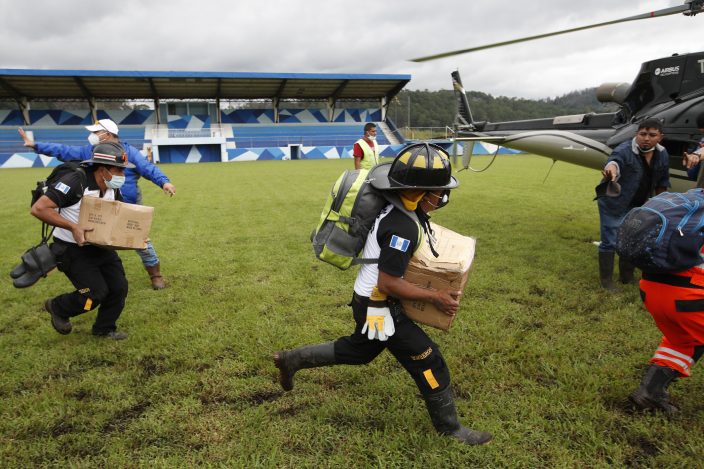 FILE - In this Nov. 7, 2020 file photo, volunteer firefighters rush to a waiting helicopter to load emergency aid to be transported to a nearby zone where residents are believed buried by a massive, rain-fueled landslide, during search and rescue efforts, in San Cristobal Verapaz, in the aftermath of Tropical Storm Eta. The search was eventually called off after recovering a few bodies and declaring about 100 people missing. (AP PhotoMoises Castillo, File)

The hurricanes' destruction comes on top of the economic paralysis caused by the COVID-19 pandemic and the persistent violence and lack of jobs that have driven families north from Guatemala, Honduras and El Salvador in great numbers during recent years. Add an element of hope from the incoming government of President-elect Joe Biden, and experts predict the region is on the verge of another mass migration.

“This is going to be much bigger than what we have been seeing,” said Jenny Arguello, a sociologist in San Pedro Sula who studies migration flows. “I believe entire communities are going to leave.”

“The outlook is heartbreaking.” 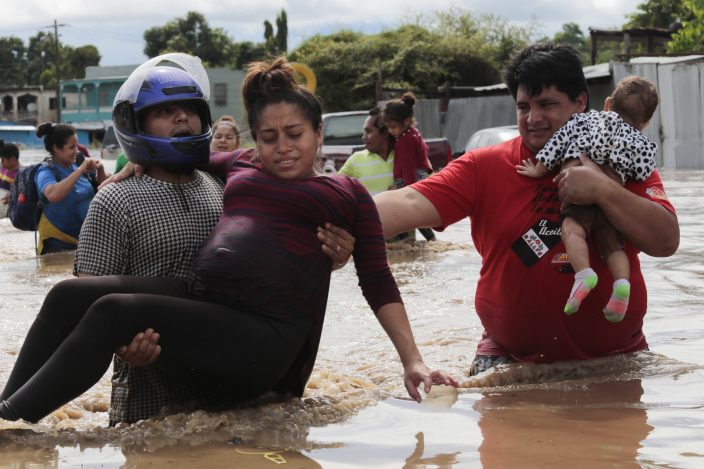 FILE - In this Nov. 5, 2020 file photo, a pregnant woman is carried out of an area flooded by water brought by Hurricane Eta in Planeta, Honduras. Thousands of homes were damaged and the infamous gang violence has not relented in Honduras, where some residents said gangs were charging a tax to boats trying to rescue people from flooded neighborhoods. (AP PhotoDelmer Martinez, File)

It’s still early. Tens of thousands remain in shelters, but those along the migration route have already started to see storm victims begin to trickle north.

Eta made landfall Nov. 3 in Nicaragua, leaving a path of death and destruction from Panama to Mexico. Iota hit the same stretch of Nicaragua’s Caribbean coast Nov. 16, pouring more rain on still flooded countries. At least 150 people were killed and more than 100 remain missing.

The same day Eta landed, U.S. voters elected Biden amid a pandemic that has devastated the continent for more than eight months. The Democrat has promised a more compassionate approach to immigration even as desperate families weigh their options inside mud-filled Central American homes. 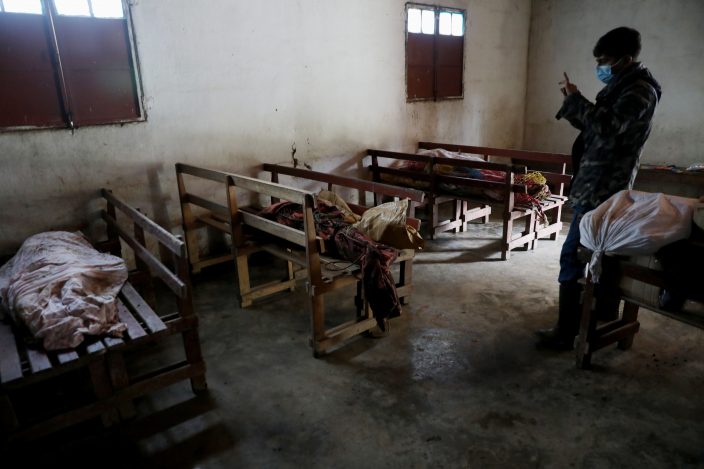 FILE - In this Nov. 6, 2020 file photo, a person stands inside a building next to bodies recovered from a massive, rain-fueled landslide in the village of Queja, in Guatemala, in the aftermath of Tropical Storm Eta. Felipe Del Cid, America's chief of operations for the IFRC, spoke of a “triple emergency” in countries like Honduras and Guatemala, referring to Eta, the pandemic and the yearslong drought that has made even subsistence agriculture impossible across a long swath of the region. (AP PhotoEsteban BibaFile)

Thousands of homes were destroyed and the infamous gang violence has not relented. Some residents around San Pedro Sula reported gangs charging a tax to boats trying to rescue people from flooded neighborhoods.

Mauro Verzzeletti, director of the Casa del Migrante in Guatemala City, said the storms will increase poverty on top of the violence people already faced, forcing more to migrate. FILE - In this Nov. 16, 2020 file photo, President-elect Joe Biden, accompanied by Vice President-elect Kamala Harris, speaks about economic recovery at The Queen theater, in Wilmington, Del. Amid the new coronavirus pandemic that has devastated the continent for eight months, U.S. voters elected Biden for president, who has promised a more compassionate approach to immigration. (AP PhotoAndrew Harnik, File)

“They've already started to come, it has begun,” he said, adding that a group of eight Hondurans driven out by the storms had arrived last week, stayed the night and continued on their way.

Jarlin Antonio Lorenzo has been living for days under a San Pedro Sula overpass in an encampment without any bathrooms after being flooded out of his home. He said there was no other option but to migrate.

“You’re going to see all of these faces in the caravan,” he said, pointing to those around him. “We’re going because we can’t stand the poverty, the hunger.” 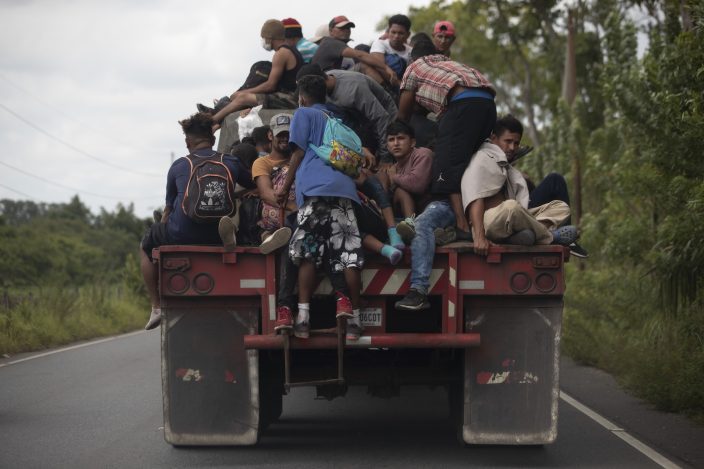 FILE - In this Oct. 2, 2020 file photo, migrants ride on the back of a freight truck that slowed down to give them an opportunity to jump on in Rio Dulce, Guatemala. Mauro Verzzeletti, director of the Casa del Migrante in Guatemala City, said the storms Eta and Iota will increase poverty on top of the violence people already faced, forcing more to migrate. (AP PhotoMoises Castillo, File)

Felipe Del Cid, Americas chief of operations for the Red Cross, described a “triple emergency” in countries like Honduras and Guatemala, referring to Eta, the pandemic and the years-long drought that has made even subsistence agriculture impossible across a long swath of the region. He said the Red Cross was preparing for internal displacement, as well as migration to other countries.

“There’s a lot of flooding again in some cities that had flooded before, but this time it has been more severe and faster because the levees that protect the cities had been damaged by Eta,” Paredes said.

Meanwhile, big expectations are building for the incoming Biden administration. A dramatic change in tone toward migrants is the most immediate expectation, followed by hopes for the elimination of the Trump administration policy that made asylum seekers wait out their cases from Mexico.

Last week, U.S. Rep. Nydia Velázquez, a Democrat from New York, introduced a bill that would grant Temporary Protected Status to Guatemalans, Hondurans and Nicaraguans already living in the United States. Trump had sought to end so-called TPS, potentially sending thousands of families back to their native countries, in some cases decades after they left.

But experts caution that Biden will be careful not to make changes that could attract a new wave of migrants.

They also warn that policies in Mexico and Guatemala to stop migrant caravans are unlikely to change. Guatemala dissolved a caravan of mostly Hondurans in early October before it reached Mexico.

“The change of government doesn’t mean the United States is going to weaken its borders so that there would be a massive migration. All of the families in the region have to take this into account,” said César Ríos, director of the non-governmental Salvadoran Migrant Institute.

“The fact that (Biden) has committed to a respectful approach to human rights doesn’t mean they’re going to make immigration easier.”

At the same time, Ríos sees only growing necessity. “We are going to enter a very painful reality in the region. Poverty is going to increase in our countries in Central America and families are going to have more needs.”

For Santos, back at the San Pedro Sula shelter, losing everything has reinforced why so many of her countrymen have left.

“When they go, it’s that the anguish has already overwhelmed them, they can’t anymore,” she said. “I’m headed there too.”