Senate Republicans will hold great sway in confirming or denying Biden’s Cabinet nominees, regardless of which party controls the narrowly split Senate after runoff elections. But key Republican senators, including the GOP leader, are keeping quiet, for now, choosing their battles ahead.

In announcing his national security team, Biden appealed Tuesday to the Senate to give the nominees “a prompt hearing" and "begin the work to heal and unite America and the world.” 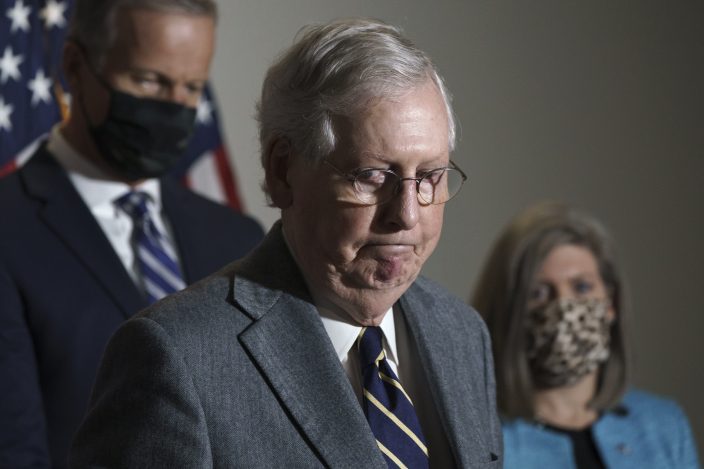 The soonest the Senate would consider the nominations is Inauguration Day, Jan. 20, when past presidents often have been able to win swift confirmation of top national security officials shortly after taking the oath of office.

But with President Donald Trump still disputing the election, McConnell is setting the tone for Senate Republicans by not publicly congratulating Biden or acknowledging Trump's defeat. He wants to give the president time to contest the vote, even as Trump's legal team has been losing most of the cases.

Even if McConnell is willing to accept Biden’s choices for top Cabinet positions, the Republican leader is not expected to allow easy Senate confirmation without a political price.

He is known for driving hard bargains even on routine business, and Republicans are eager to level payback on Democrats for running out the clock with procedural hurdles to Trump's nominees.

Nominees need 51 votes for confirmation. Heading into 2021, Republicans have a 50-48 hold on the chamber. But if Democrats win both Georgia seats in the Jan. 5 runoff elections, they would flip to majority control because the vice president-elect, Kamala Harris, is a tie breaker.

Republican strategist Alex Conant said McConnell is “trying to show some deference to Trump in hopes of promoting party unity” ahead of the Georgia election.

The outcome in January is certain to make a narrowly held Senate. If McConnell retains control, it's unclear what priorities he would extract from the Biden administration in return for confirmation. If Democrats win control, they will have no margin for dissent among more progressive or conservative flanks in approving Biden's nominees.

Biden purposefully tapped seasoned government officials for his national security team as he vows a diverse administration reflecting the nation.

Those introduced Tuesday are alumni of Barack Obama's administration and Biden's own decades in Washington: Antony Blinken, nominated to be secretary of state; Alejandro Mayorkas, a Cuban American former federal prosecutor who would be the first immigrant as secretary of homeland security; Linda Thomas-Greenfield, a career diplomat, as ambassador to the United Nations; and Avril Haines, who would be the first woman to serve as director of national intelligence.

He also announced John Kerry, the former secretary of state, senator and 2004 Democratic presidential nominee, as a special presidential envoy for climate, and Jake Sullivan, a former top Hillary Clinton aide as national security adviser. Those two positions do not require Senate confirmation.

Biden is also expected to tap Janet Yellen, the former chair of the Federal Reserve, as treasury secretary.

Some Republican senators, particularly those being watched for their own potential 2024 presidential bids, are objecting to Biden's team as they flex their national security credentials.

Sen. Tom Cotton, R-Ark., mocked Biden for selecting a team that "will only reinforce his instincts to go soft on China.”

Being tough on China is fast emerging as a theme among Republicans, echoing Trump in taking a more confrontational approach to the economic and military powerhouse.

GOP Sen. Marco Rubio, a 2016 presidential contender, tweeted that Biden's team was stacked with Ivy League graduates who “will be polite & orderly caretakers of America’s decline.”

Rubio said in a tweet, “I have no interest in returning to the ‘normal’ that left us dependent on China.”

Another potential 2024 hopeful, Sen. Josh Hawley, R-Mo., tweeted about the Biden team: “What a group of corporatists and war enthusiasts.”

But silent this week were the potential GOP chairs of key committees who would be expected to hold confirmation hearings for the nominees.

Also declining to weigh in were centrist GOP senators — Lisa Murkowski of Alaska and Susan Collins of Maine — who will be keenly watched as possibly supporting Biden's ability to assemble his team.

Mayorkas faces the potentially toughest path to confirmation, having been narrowly confirmed on a party-line vote without GOP support in 2013 as deputy secretary at homeland security.

At the time, he had been under investigation by the department's inspector general, who later found that Mayorkas, as director of the U.S. Citizenship and Immigration Services, appeared to give special treatment to certain people as part of the visa program.

Democrats “have got a lot of work to do” to persuade Republican senators to support Mayorkas, said one Republican aide who spoke on condition of anonymity Tuesday to frankly discuss the situation.

Blinken also faces hurdles. Just one Republican voted to confirm him as a deputy secretary of state in 2014 — former Arizona Sen. Jeff Flake.

Others, though, may have an easier path to confirmation.

Thomas-Greenfield was twice confirmed on a voice vote without dissent in 2012 to be director general of the Foreign Service and in 2015 as an assistant secretary of state.

Yellen was confirmed twice with bipartisan support, including as Fed chair in 2014 with the backing of three sitting Republican senators: Collins, Murkowski and Richard Burr of North Carolina.