Erling Haaland scored twice to continue his prolific Champions League scoring form as Borussia Dortmund swept aside Club Brugge 3-0 to all but assure the German team of a place in the knockout stage.

Haaland scored his goals either side of a curled free-kick from Jadon Sancho, who also set up Haaland's opener. The 20-year-old Norwegian's two goals took him to 16 from 12 games in his brief Champions League career.

Dortmund took the lead in the 18th minute when Jadon Sancho picked up a loose ball in midfield and played a through ball to Haaland, who hit a powerful low shot past former Liverpool goalkeeper Simon Mignolet for the 200th Champions League goal in Dortmund’s history. 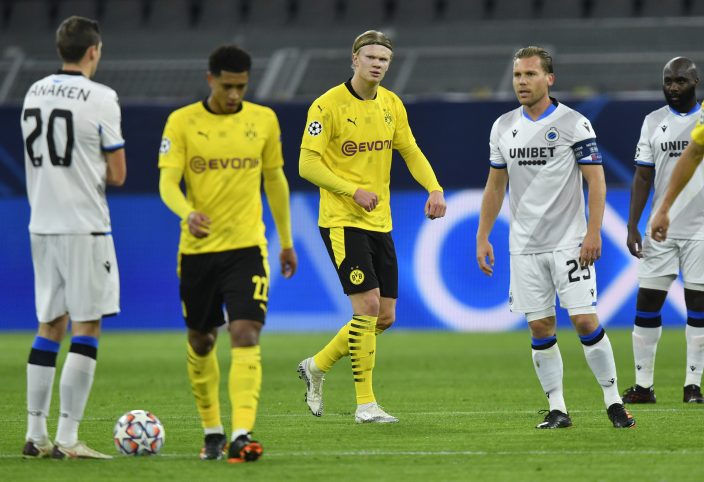 Sancho has had an indifferent start to the Bundesliga season and was dropped for Dortmund’s last game. The England winger showed his value to the club by setting up Haaland’s opener against Brugge and then making it 2-0 with the last kick of the first half, curling a free kick over the Brugge wall and into the top-left corner.

“It’s a fantastic goal. I’ve been practicing my free kicks recently so I’m happy that it came off today,” Sancho told broadcaster DAZN.

“I’m just happy that I’m playing and I have coaches and teammates that believe in me. Recently it’s been a hard situation for me, recent times have been hard, but it’s all about how I come back.” 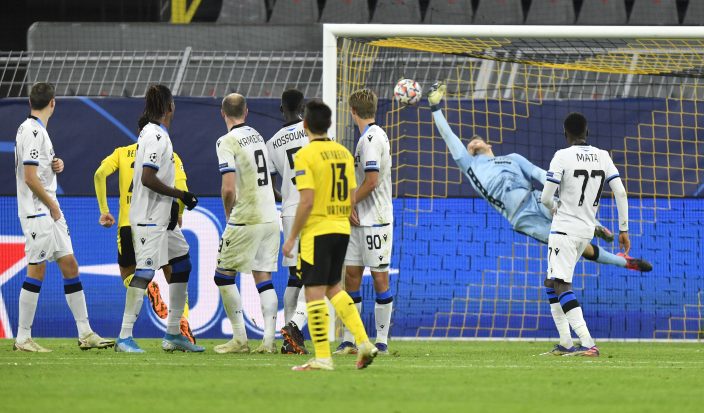 Haaland’s second was a gift from Brugge. He was in a clear offside position when captain Ruud Vormer fumbled an attempted clearance and sent it straight to Haaland to finish with ease.

Belgian clubs are easy pickings for Haaland. The Norwegian became the youngest player to score a Champions League hat-trick with three goals for Salzburg against Genk last year in a game which made him one of the most sought-after young players in the world. In four games against Belgian teams, Haaland has scored eight goals.

Dortmund will be assured of a place in the last 16 with just a single draw from its last two group games against Lazio and Zenit St. Petersburg. Lazio beat the Russian club 3-1 in Tuesday's other game in Group F. Brugge still has a faint chance of qualifying but is also battling Zenit for third place and a spot in the Europa League.

Dortmund had 16-year-old forward Youssoufa Moukoko on the bench and he would have become the youngest player in Champions League history if he played. However, coach Lucien Favre opted against bringing him on.

Moukoko, who broke the German league record for youngest player Saturday, could yet break the Champions League record later. He was 16 years and 4 days old for the game against Brugge, 83 days younger than Celestine Babayaro was when he made his debut for Anderlecht in 1994.

Asian shares were mixed Monday, as ...