Coming off a long weekend break, the Seattle Seahawks had a welcome sight at practice Tuesday.

For the first time in a month, running back Chris Carson was a healthy participant, just one of a handful of players the Seahawks expect to have back in the next couple of weeks.

Carson has not played since suffering a foot sprain in Week 7 against Arizona. There was an outside hope Carson would return last week for the Seahawk's second game against the Cardinals but Seattle opted to hold him out for one more week. Carlos Hyde played and rushed for 79 yards and a TD in last Thursday's 28-21 win over Arizona. 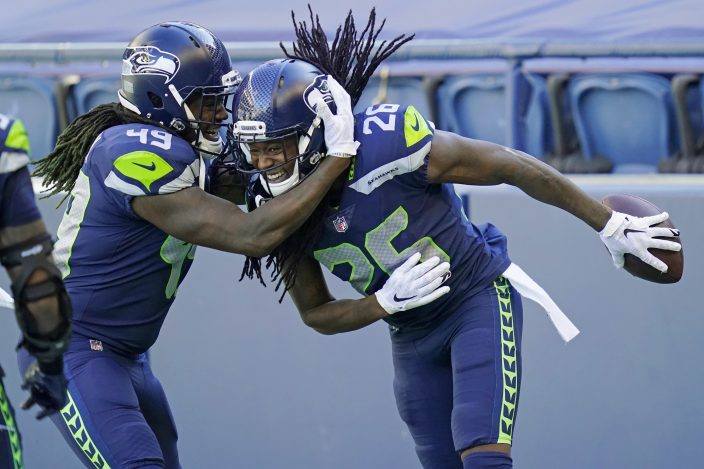 Seattle Seahawks cornerback Shaquill Griffin (26) is greeted by his twin brother, outside linebacker Shaquem Griffin (49), after Shaquill Griffin intercepted a pass against the Dallas Cowboys during the first half of an NFL football game, Sunday, Sept. 27, 2020, in Seattle. (AP PhotoElaine Thompson)

Carson is second on the team behind quarterback Russell Wilson in yards rushing with 323 and has six total touchdowns rushing and receiving.

“For the first time we saw Chris and Carlos out there together in some time. That’s great to see. That makes it a really full room,” Carroll said. “These guys have been battling, they’ve been competing all the way through.”

Griffin has also been out since Week 7, while Pocic missed the past two games after reporting concussion symptoms following Seattle’s loss at Buffalo. Seattle was so thin at center that rookie right guard Damien Lewis was shifted to center for last week’s game, his first at the position at any level.

“We’re trying to take advantage of every day that guys get another break to return,” Carroll said. “Everybody’s banged up this time of year. So these days are really important and the guys will feel better. They bounced around pretty good today. We’ll get another day off for Thanksgiving here, too, so we should be in pretty good shape for this weekend.”

Seattle is expecting running back Rashaad Penny (knee) and defensive end Darrell Taylor (leg) to practice for the first time this season at some point in the next couple of weeks. Penny has been on the physically unable to perform list and Taylor on the non-football injury list all season.

It was not entirely good news from Carroll. Right tackle Brandon Shell’s status is unknown for the Eagles after he suffered a sprained ankle against Arizona. Running back Bo Scarbrough will need surgery on a torn hamstring suffered when he was tackled awkwardly versus the Cardinals.