Who we are with our parents and who we are in a romantic relationship can seem like different people.

For Harper (Mackenzie Davis), a newspaper reporter living a nice adult life in Pittsburgh with her art student girlfriend Abby (Kristen Stewart), the gap is more dramatic than most: She has yet to come out to her parents. She has also invited Abby, who intends to propose, home with her for Christmas only to drop the truth on her in the car ride there. For five days, they're going to be close friends and roommates. Then, Harper promises, she'll tell her parents.

High-profile Hollywood films about lesbian couples are more often than not dramatic, set in the past and pretty sad, so on the most basic level it is instantly refreshing that “ Happiest Season ” is a modern romantic comedy through and through. It's also one of the better recent ones too. Written by Mary Holland and Clea DuVall, who directed, it is charming, funny and easy to watch if a little by-the-books. 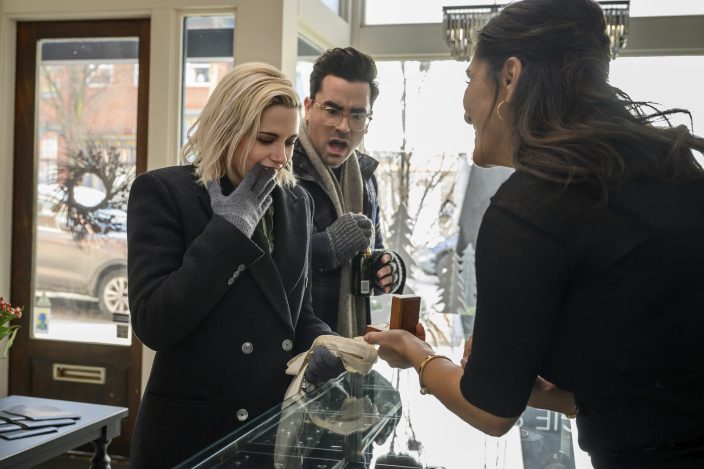 This image released by Hulu shows Kristen Stewart, left, and Dan Levy in a scene from "Happiest Season." (Jojo WhildenHulu via AP)

We meet Harper and Abby on a particularly happy occasion, having a possibly ironic, but still flirty date night on a group tour of their neighborhood’s Christmas decorations. Abby doesn’t love Christmas the way Harper does, but she decides to give it a try anyway when Harper invites her home. This was obviously a mistake on Harper’s part considering the aforementioned complications and lies. But they go through it anyway and descend on her parents’ fancy suburban home.

The Caldwell family are conservative, upper middle-class cliches, obsessed with education, status and success. And Harper falls right back into her old ways, and wardrobe, around her parents Tipper (Mary Steenburgen) and Ted (Victor Garber), who is running for local office. Her younger sister Jane (Holland) is sweet but skittish and constantly projecting her own inferiority and her older sister Sloane (Alison Brie) is a repressed, type-A mother of two who has disappointed her parents by going into a gift basket making business instead of law. You’d think they would at least appreciate the fact that Gwyneth Paltrow’s GOOP apparently approves of the gift baskets. But you get the point: These parents are hard to please and a political campaign makes it even more difficult for Harper to finally tell her family the truth.

The actors are the big draw and hook in this endeavor with a story that hits very familiar beats following a standard home-for-the-holidays rom-com script. Standouts include Dan Levy, of “Schitt’s Creek,” who plays Abby’s truth-telling best friend John, and Aubrey Plaza as Riley, an ex of Harper’s who strikes up a friendship with Abby as she becomes more and more alienated in the Caldwell home. Steenburgen especially does some truly wonderful work here with a character that could have just been a terrible stereotype. 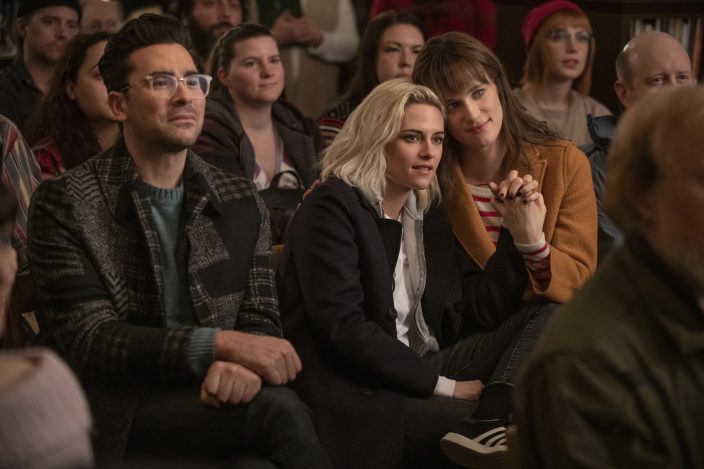 This image released by Hulu shows Dan Levy, from left, Kristen Stewart, and Mackenzie Davis in a scene from "Happiest Season." (Lacey TerrellHulu via AP)

Stewart also seems to be having fun and making a great case that she should consider more broad comedies. In fact, it’s so enjoyable spending time with her and some of the tertiary characters that part of me wished she would just ditch the Caldwells altogether while they work out their issues and go hang out with Riley and John for the holidays.

“Happiest Season” is a little all over the place in its tone, whiplashing between over-the-top comedy and sincere emotional moments, but it’s not hard to look past some of the clunkiness. Overall, it’s a very pleasant watch and I wouldn’t hesitate to put it on again soon.

“Happiest Season,” a Hulu and Sony Pictures release, is rated PG-13 by the Motion Picture Association of America for “some language.” Running time: 102 minutes. Three stars out of four. This image released by Hulu shows Kristen Stewart, left, and Mackenzie Davis in a scene from "Happiest Season." (Lacey TerrellHulu via AP) This image released by Hulu shows Victor Garber, left, and Mackenzie Davis in a scene from "Happiest Season." (Lacey TerrellHulu via AP) 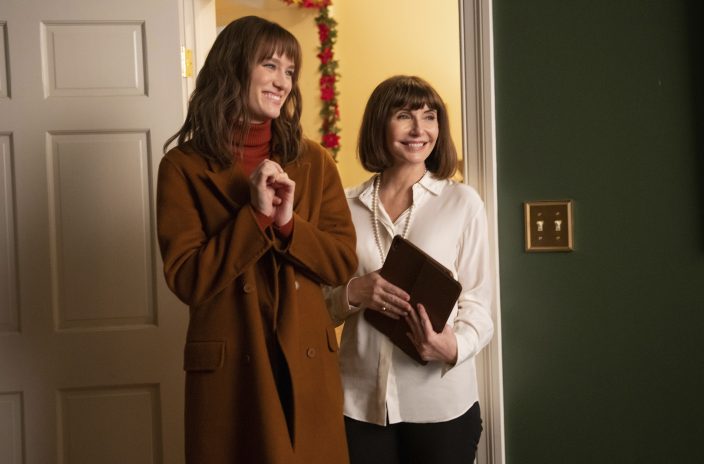 This image released by Hulu shows Mackenzie Davis, left, and Mary Steenbergen in a scene from "Happiest Season." (Lacey TerrellHulu via AP) This image released by Hulu shows Alison Brie, Mackenzie Davis, and Mary Holland in a scene from "Happiest Season." (Lacey TerrellHulu via AP) 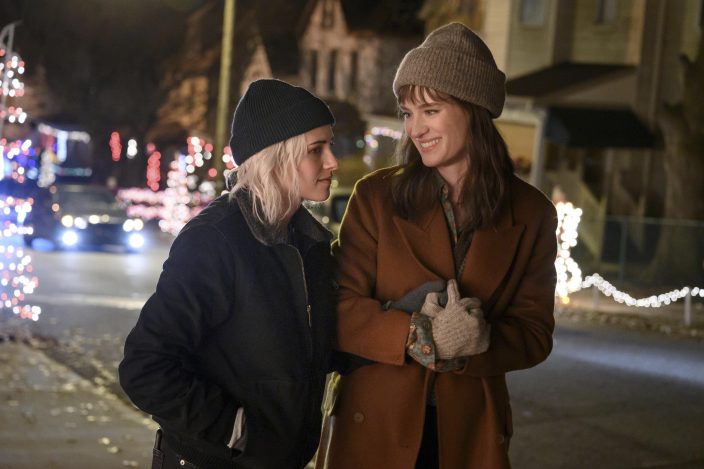 This image released by Hulu shows Kristen Stewart, left, and Mackenzie Davis in a scene from "Happiest Season." (Jojo WhildenHulu via AP)

The schedule for the final round-r ...