Juventus, Barcelona, Chelsea and Sevilla all reached the knockout stage of the Champions League with two matches to spare on Tuesday.

Alvaro Morata scored in injury time to send Juventus through with a 2-1 win at home over Hungarian team Ferencváros, ensuring the Italian champions finished at least second in Group G.

Barcelona tops the group and booked its spot in the last 16 for the 17th straight season with a comfortable 4-0 victory over Dynamo Kyiv despite the absence of Lionel Messi, Frenkie de Jong and a number of others. 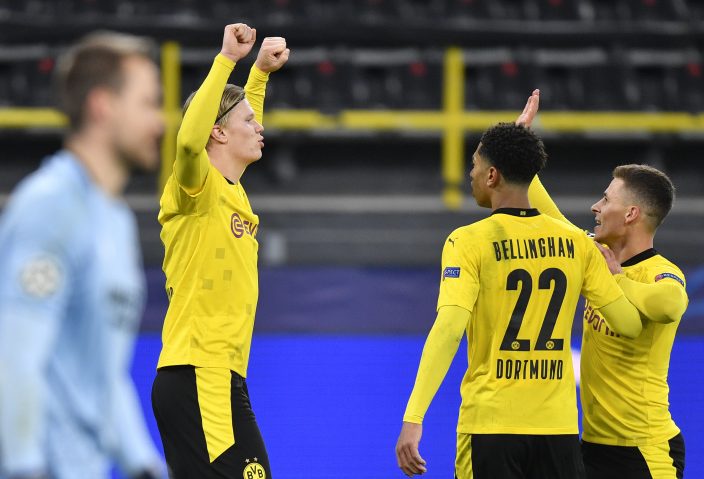 Both Chelsea and Sevilla left it late to advance from Group E. Olivier Giroud came off the bench to score an injury-time header as Chelsea won 2-1 at Rennes, and Munir El Haddadi scored in the final minute of stoppage time as Sevilla defeated Russian newcomer Krasnodar 2-1 away.

Elsewhere, Erling Haaland maintained his remarkable scoring pace with two goals to put Borussia Dortmund in touch of reaching the last 16 with a 3-0 win at home over Club Brugge. 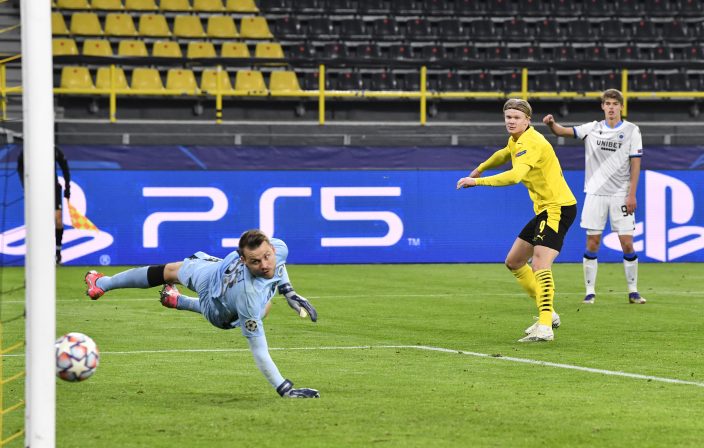 United States right back Sergiño Dest scored his first goal for Barcelona and another American, 19-year-old forward Konrad de la Fuente, came on as a substitute in Kyiv for his debut.

De la Fuente, who made his debut for the U.S. earlier this month, became the record seventh American to play in Europe’s premier competition this season.

It was only the second time two Americans played together for a club in the Champions League. Tim Howard and Jonathan Spector played for Manchester United against Fenerbahçe on Dec. 8, 2004. 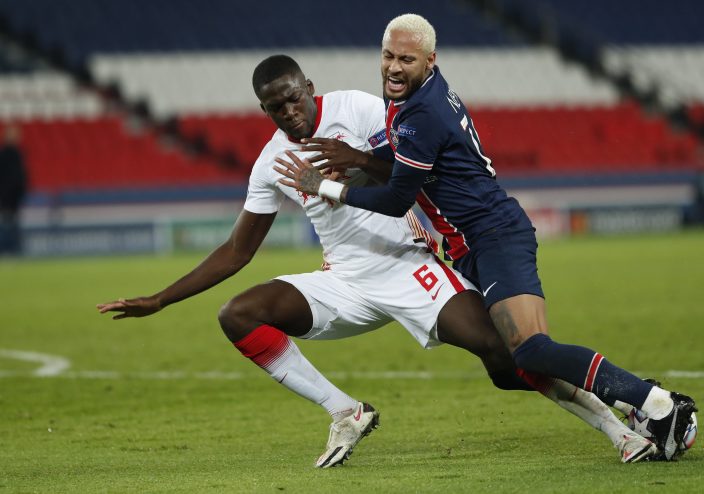 Martin Braithwaite scored twice and Antoine Griezmann grabbed the other as Barcelona secured its fourth win in four games from Group G. It currently has a three-point lead over Juventus.

Barcelona was without the injured Sergio Busquets, Gerard Piqué and Sergi Roberto. 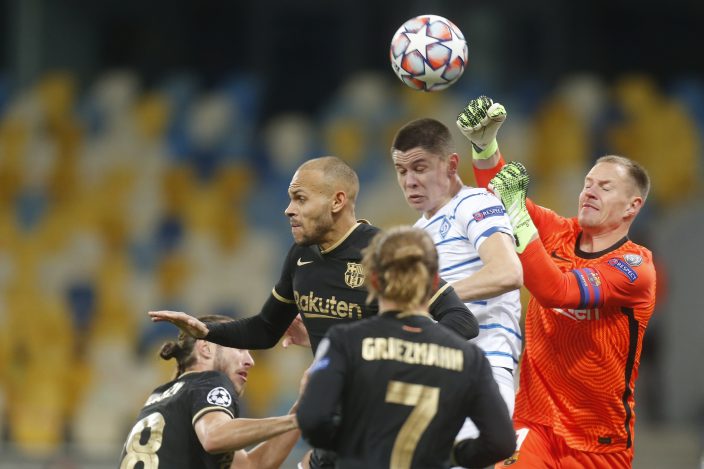 Sevilla qualifying for the last 16 means the Spanish side cannot defend its Europa League title, as only the third-place finishers in each group enjoy the cushion of playing in Europe’s secondary competition.

It will be a strange feeling for the Spanish side, which already has a record six Europa League titles, all since 2006.

“Qualifying for the last 16 of the Champions League is fantastic,” Lopetegui said on his return to Krasnodar, where he was previously fired as coach of Spain’s national team before the 2018 World Cup for taking a job with Real Madrid without telling the Spanish soccer federation.

Both Sevilla and Chelsea have 10 points in Group E, while Krasnodar and Rennes stayed at one point each after four matches.

Haaland took his tally to 16 goals in 12 Champions League games in Dortmund’s 3-0 win over Brugge, while Jadon Sancho scored an eye-catching free kick to put the German side on course to qualify from Group F.

Former Dortmund forward Ciro Immobile scored twice on his return from the coronavirus in Lazio’s 3-1 win over Zenit Saint Petersburg.

Immobile has 46 goals in 53 appearances in all competitions for Lazio since the beginning of last season. Only Robert Lewandowski (68 goals) has scored more in Europe’s five top leagues over the same period.

Fernandes might even have scored a hat trick, but he handed over spot-kick duties to Marcus Rashford, who had been brought down for the penalty, and the England forward converted to make it 3-0 at an empty Old Trafford.

Daniel James scored the fourth as United made up for its surprise 2-1 loss in Istanbul.

United now has nine points, three more than both Paris Saint-Germain and Leipzig.

A penalty from Neymar was enough for a nervous-looking PSG to scrape a 1-0 win against Leipzig, which wasted a number of chances to equalize.

PSG’s win gives it a better head-to-head record against Leipzig, thanks to grabbing an away goal from their previous game and not conceding any.

Trouble at home may change Biden's hand in Iran nu ...

A lot of the characters are the sa ...