MOSCOW — Russian authorities have registered a record number of coronavirus deaths for a second straight day.

The government coronavirus task force reported 507 new deaths on Wednesday, the country's highest daily toll. The previous record of 491 deaths was reported on Tuesday. A total of 37,538 people have died from the coronavirus in Russia, according to the task force.

Russia has been swept by a rapid resurgence of the outbreak this fall, with numbers of confirmed infections and deaths hitting new highs almost daily and significantly exceeding those reported in the spring. 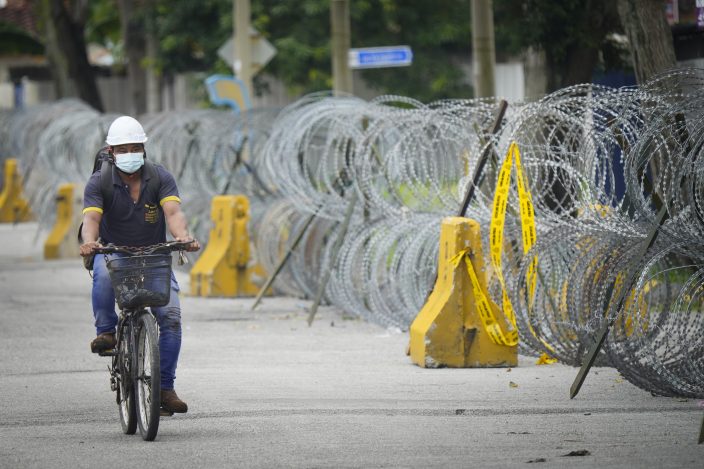 A men cycling next to coils of barbed wire near Top Glove factory hostel in Shah Alam, Malaysia, Wednesday, Nov. 25, 2020. Malaysia's Top Glove Corp., the world's largest maker of rubber gloves, says it expects a two to four-week delay in deliveries after more than 2,000 workers at its factories were infected by the coronavirus, raising the possibility of supply disruptions during the pandemic. (AP PhotoVincent Thian)

The country’s authorities have rejected the idea of another nationwide lockdown or widespread closure of businesses, even as media reports from Russian regions showed that the healthcare system was under severe strain. 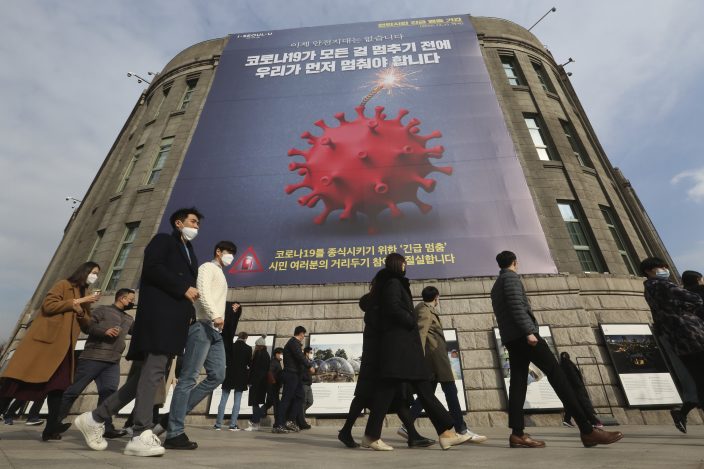 People wearing face masks as a precaution against the coronavirus walk under a banner emphasizing an enhanced social distancing campaign in front of Seoul City Hall in Seoul, South Korea, Wednesday, Nov. 25, 2020. The banner reads: "We have to stop before COVID-19 stops everything." (AP PhotoAhn Young-joon)

— Restaurant employees out of work again as coronavirus surges anew 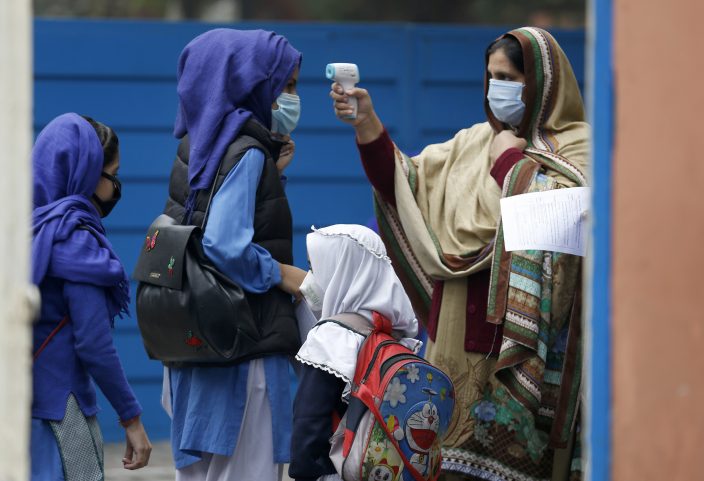 A teacher checks body temperatures of students as they arrive at a school in Lahore, Pakistan, Wednesday, Nov. 25, 2020. Pakistan will again close all educational institutions as of Thursday Nov. 26, 2020, because of a steady and increasingly drastic increase in coronavirus cases. (AP PhotoK.M.Chaudary)

A worker sprays sanitizer on a student's shoes at a school in Lahore, Pakistan, Wednesday, Nov. 25, 2020. Pakistan will again close all educational institutions as of Thursday Nov. 26 because of a steady and increasingly drastic increase in coronavirus cases. (AP PhotoK.M.Chaudary)

SANTA FE, N.M. — The New Mexico Legislature has approved a $330 million economic relief package aimed at helping unemployed workers and businesses that have been hit hard by the coronavirus pandemic.

Passage came Tuesday night as lawmakers rushed to wrap up a one-day session that was called by Gov. Michelle Lujan Grisham.

If the Democratic governor signs the measure, the state could distribute $1,200 stimulus checks to people who are unemployed or who have run out of unemployment this year. Smaller payments will be distributed to residents who missed out on federal stimulus checks, including dependents and immigrants in the country without legal permission. 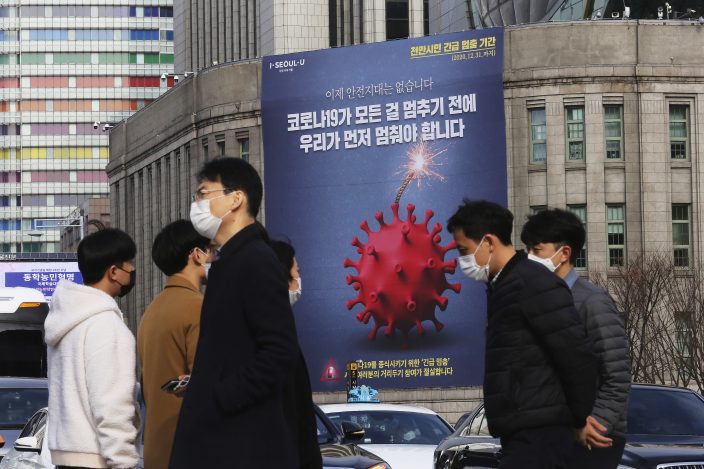 A banner emphasizing an enhanced social distancing campaign is displayed on the wall of Seoul City Hall in Seoul, South Korea, Wednesday, Nov. 25, 2020. The banner reads: "We have to stop before COVID-19 stops everything." (AP PhotoAhn Young-joon)

Most of the proposed spending will be made possible by federal relief funding previously assigned to New Mexico.

NASHVILLE, Tenn. — Tennessee’s governor says that once coronavirus vaccines become available, they will be optional in the state’s K-12 public schools.

Gov. Bill Lee said Tuesday that vaccines will be very important for Tennessee to “ultimately really be able to handle” the pandemic. But he says he doesn’t foresee vaccine mandates for school districts in Tennessee.

The state’s health commissioner says the first doses could arrive in Tennessee around Dec. 15. The first wave will be reserved for frontline health care workers and first responders. She says widespread availability would likely be in late spring or early summer.

EL PASO, Texas — Officials in El Paso County in Texas plan to impose a new curfew in hopes of combatting a surge in coronavirus cases that is overrunning the border area’s hospitals and funeral homes.

El Paso County Judge Ricardo Samaniego has said Gov. Greg Abbott’s office has approved the curfew. In a letter sent last week to Abbott, Samaniego said the curfew would be limited in nature and would not interfere with people seeking to access essential or nonessential services.

The county judge and state officials have been at odds over Samaniego’s efforts to implement rules to slow the virus’ spread in the border city of El Paso.

Earlier this month, an appeals court overturned an El Paso County order that would have closed nonessential businesses, including gyms and salons.

INDIANAPOLIS — Indiana has nearly recorded its most COVID-19 deaths for a single month with a week remaining as health officials on Tuesday added 103 more deaths to the state’s pandemic toll.

The Indiana State Department of Health’s daily update included the new deaths mostly occurring over the past several days through Monday, and which push November’s total to at least 991.

Indiana’s monthly high for COVID-19 deaths was 1,041 in April, when at most the state’s moving seven-day average was 42 fatalities a day. That daily average has now reached 51 as Indiana’s hospitals are treating nearly double the number of coronavirus patients as at any point since seeing their first infections in March.

Coronavirus hospitalizations have reached a level where health care leaders say the system is becoming overwhelmed and some hospitals have started rationing care to treat those most severely ill.

ATLANTA — Although White House officials are pushing Georgia to do more to slow the spread of the coronavirus, Gov. Brian Kemp said Tuesday that the responsibility rests with individual Georgians, as he implored them to take precautions over Thanksgiving.

The holiday comes at a perilous moment for the state. Although the virus is spreading more slowly in Georgia than in 40 other states, according to figures kept by The Associated Press, the number of infections is still rising rapidly and approaching the peak Georgia saw in late July.

The Republican governor repeated the same guidance he’s been giving Georgians since summer, that they should wear masks, keep their distance from others, wash their hands, and follow Kemp’s rules, including bans on large gatherings. The governor said he wasn’t planning any other measures, such as a statewide mask mandate, or renewed restrictions on businesses.

Also on Tuesday, a second member of Congress from Georgia tested positive for COVID-19.

Republican U.S. Rep. Rick Allen of Evans announced Tuesday that a test shows he has the coronavirus. Allen represents the 12th District stretching from Augusta across all or part of 19 counties.

He says he has no symptoms and will isolate at home. Republican U.S. Rep. Drew Ferguson of West Point tested positive in October after experiencing mild symptoms. U.S. Sen. Kelly Loeffler had isolated after she got a positive COVID-19 test on Friday, but has since gotten two straight negative tests.

LOS ANGELES — A California judge has rejected a request from a restaurant industry group to block the nation’s most populous county from reinstating a ban on outdoor dining, a plan the group said would devastate businesses and workers.

The new rule scheduled to take effect Wednesday would restrict restaurants, bars and other businesses in the county to takeout and delivery.

A once large caravan of Honduran m ...

NASA is considering a second firin ...