Britain's Treasury chief, Rishi Sunak, is being urged to resist calls to cut the proportion of money the government allocates to overseas aid as he prepares to unveil the damage to the public finances wrought by the coronavirus pandemic.

He is set to tell lawmakers later Wednesday that the deterioration in the public finances has been worse than at any time since wartime, but that now is not the time to announce widespread spending cuts and tax rises.

Figures last week showed that the country's debt pile had passed the 2 trillion-pound ($2.7 trillion) mark for the first time in British history, taking it over 100% of annual national income. 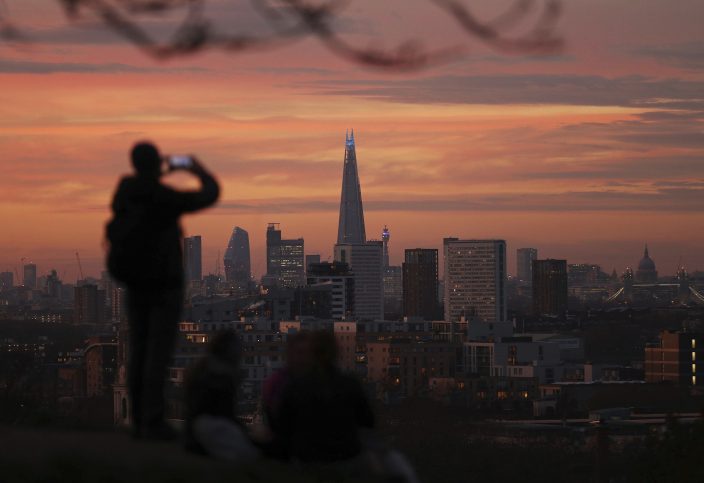 A person takes a photo of the skyline with the Shard building in the center, at sunset, from Greenwich Park in London, Tuesday, Nov. 24, 2020. (Yui MokPA via AP)

With the public finances in such bad shape, he is set to make a start on repairing them. He is widely expected to freeze the pay of workers in the public sector and there are fears that he is to cut the proportion of Britain's national income that the government allocates to foreign aid, to free up billions.

Concerns have mounted over recent days that the government is about to abandon its commitments on overseas aid. Some in the Conservative government have argued for a reduction in the commitment to maintain aid spending at 0.7% of national income to 0.5%.

Nobel Prize laureate Malala Yousafzai joined calls for Sunak to make sure that the commitment is not ditched during his spending review, which will allocate money across governmental departments. 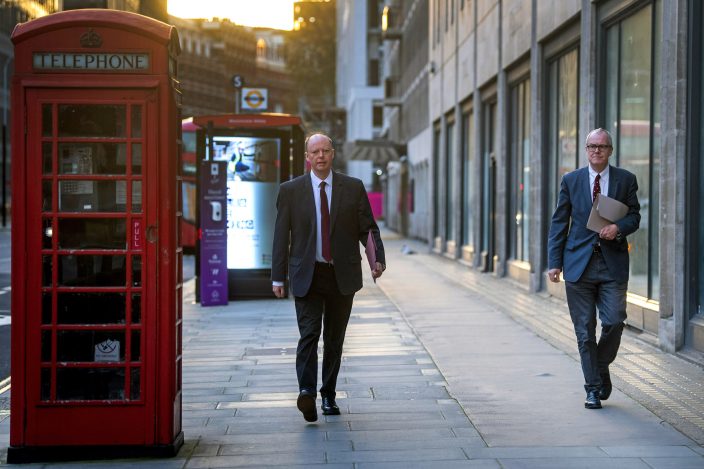 Britain's Chief medical officer Chris Whitty and chief scientific adviser Sir Patrick Vallance walk together on Victoria Street in Westminster, London, as England continues a four week national lockdown to curb the spread of coronavirus, Tuesday, Nov. 24, 2020. Prime Minister Boris Johnson will set out plans to the House of Commons for a strengthened three-tier system of coronavirus restrictions to replace the national lockdown in England and to pave the way for a limited relaxation at Christmas. (Victoria JonesPA via AP)

“COVID-19 could force 20 million more girls out of school," she said. “To keep girls learning, we need leaders to prioritise education.”

Undoubtedly, Sunak is facing pressures from all sides, to maintain the flow of money into health at the same time as trying to help people back into work if they have lost their job during the past few months of the pandemic.

Sunak has pledged to make jobs his “number one priority,” and is set to announce the launch of a three-year programme, worth 2.9 billion pounds ($3.8 billion) to help more than a million unemployed people get back into work in the wake of the pandemic.

Sunak, though, is braced for a backlash from trade unions over an expected freeze on public sector pay as he begins to repair public finances.

Sunak is also expected to announce measures to support Prime Minister Boris Johnson's “levelling-up” agenda with the publication of the much-delayed National Infrastructure Strategy and investment across the U.K.’s regions, particularly in the north of England where the Conservatives won seats at the last general election.