Chadwick Boseman surges onto the screen as fast-talking trumpeter Levee in “Ma Rainey’s Black Bottom” like a man on an electrified tightrope -- balancing precariously between hope and cynicism, humor and sadness, joy and pain, and love and hate.

Unlike with some of Boseman’s other famous characters who’ve had a clear moral center from the start, it's not clear what Levee, a creation of legendary playwright August Wilson, has up his sleeve. Handsome and wiry, he’s constantly on edge, and behind even his most brilliant smile there’s a whiff of something amiss. We don’t really know what we're looking at. But we sure don't want to look away.

Boseman’s performance in this film adaptation of Wilson's 1982 play, lovingly directed by George C. Wolfe, would be heartbreaking even if the actor hadn’t tragically lost his life to cancer this year. 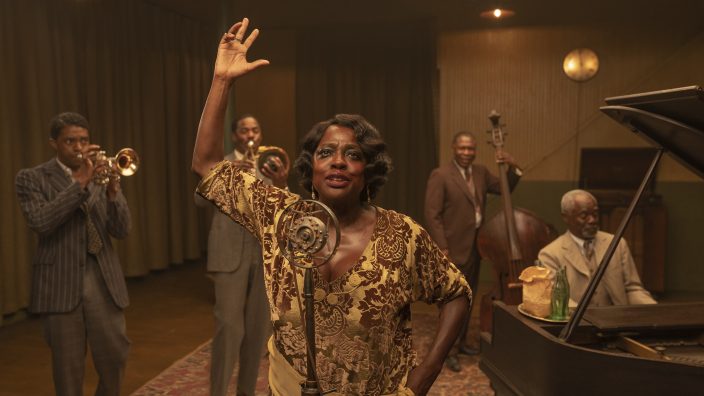 But watching it now, that knowledge informs every moment, as one imagines the challenges he must have faced in a famously taxing role that was clearly so important to him. It goes without saying that the performance is brilliant, and yes, electric, but it’s also heroic. If there had to be a final role, what a gift that it was this, an exclamation point to a career that seems ever more momentous.

Boseman isn’t the only volcanic force in “Ma Rainey,” a meditation on power, race, sex and commerce in early 20th-century America treated with sensitivity and grace by Wolfe, with a screenplay by Ruben Santiago-Hudson and score by Branford Marsalis. There’s also the matter of the titular Ma herself, played by a superb Viola Davis, nearly unrecognizable in her broadened silhouette, mouth of gold teeth, and coat upon coat of eye makeup. Together, she and Boseman conduct a master class.

A historical note: Ma Rainey, who died in 1939, was a groundbreaking Black singer from Georgia known as “Mother of the Blues.” She’s the only real-life character in Wilson’s 10-play cycle documenting the African American experience, and the only LBGT character, too. 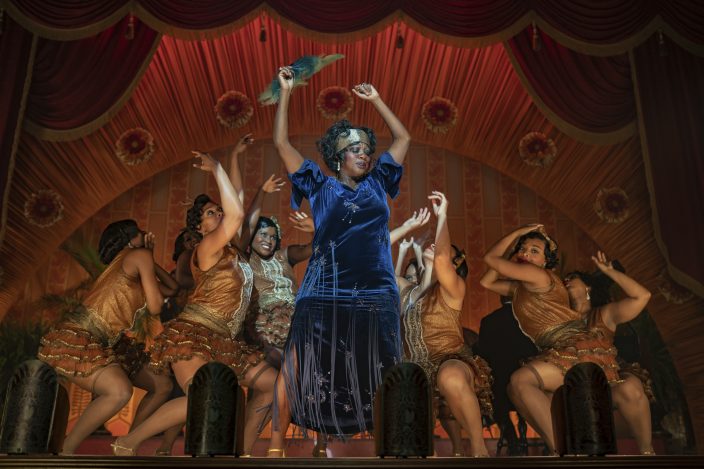 Wolfe, who doesn't try to underplay the material's theatrical roots, gives us a a few tone-setting performance scenes. But the action takes place almost exclusively inside a white-owned studio in Chicago, where Ma and her band are scheduled one afternoon in 1927 to record a few hits. Intensifying the claustrophobia, Wolfe has turned it from winter to sultry summer; Ma is perpetually glistening in sweat.

Before Ma arrives -- suitably late -- her band gathers. There’s the fatherly Cutler (Colman Domingo), Slow Drag (Michael Potts), and pianist Toledo (Glynn Turman). Then Levee bursts in, brandishing a prized new pair of shoes. Not only does he have talent, he boasts to the older guys: “I got STYLE.”

That he does. And ambition. Encouraged by the white studio owner, he's writing songs and plans to launch his own band. And he has his own, jazzier version of “Black Bottom," sure to get people dancing. 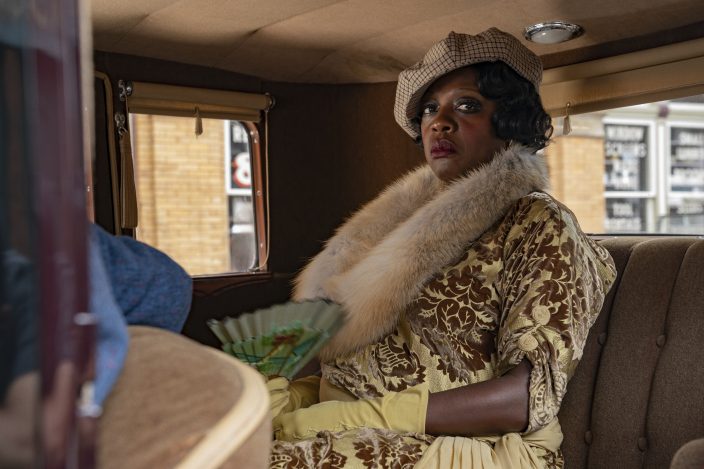 But Ma isn’t having it. She has her version of the song, and it works. She's also insistent that her nephew Sylvester give the introduction, even though he stutters. And she won’t begin recording until she’s good and ready. "That's the way it go around here,” she says.

Ma isn’t merely throwing around her weight. She's staking a claim to her very dignity. Once the studio has what they need, she knows, they won't care a whit about her. And so, when the ice-cold Coke she requires is forgotten, she won't budge until it comes. Watch Davis guzzle down that Coke ferociously when it does.

Ma rightly sees Levee as a threat to her style of performing, but also to her authority. To make it worse, she senses he has eyes on her young girlfriend, Dussie Mae (Taylour Paige). She's right -- and it’s more than his eyes.

But Levee isn't just a brash troublemaker. Behind the bluster is a deep well of pain, which we come to understand through several devastating tour-de-force monologues that hark back to past demons, and hint at future tragedy. If you haven’t seen the play, brace yourself.

Seven years ago, Boseman wrote poignantly about the experience of meeting Wilson, whom he clearly revered, and reciting the playwright's lines, which he likened to poetry.

“Filling one’s nostrils with the emotionally charged breath to recite an August Wilson monologue,” he wrote, “can be transformative.”

And now we know how transformative it can be to watch Boseman himself recite those monologues. We should all count ourselves lucky to be able to witness this, his final and arguably finest performance.

“Ma Rainey’s Black Bottom,” a Netflix release, has been rated R by the Motion Picture Association of America “for language, some sexual content and brief violence.” Running time: 94 minutes. Four stars out of four.

MPAA definition of R: Restricted. Under 17 requires a parent or adult guardian.

Lions hire GM Brad Holmes after he wasn't on origi ...

Brad Holmes was not even a candida ...