The most heated wrangling over the title of soccer's greatest player could be found between Diego Maradona and Pelé themselves.

So often, their squabbling would descend into acrimonious barbs and taunts launched between the finest to play the game.

It was a feud in which FIFA did not want to takes sides when it came to naming the top player of the 20th century. Pelé was the pick of experts. Maradona was the people's choice as the winner of an online vote. So the pair shared the award and continued to bicker in public. 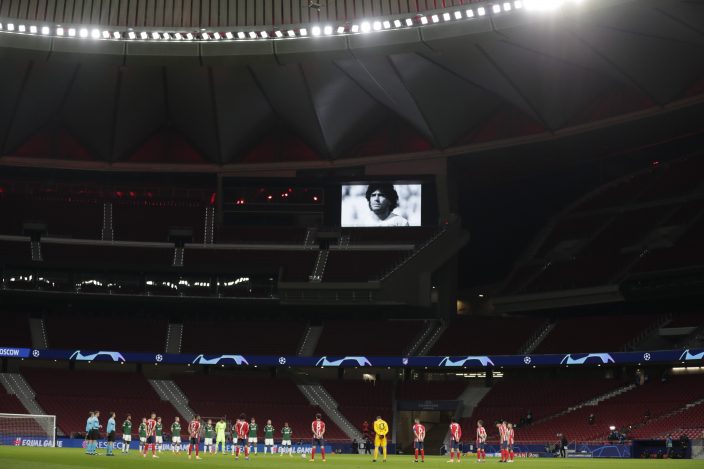 Players keep a minute of silence as a picture of soccer legend Diego Maradona is seen on the screen of the Wanda Metropolitano stadium in Madrid, Spain, prior to the Champions League group A soccer match between Atletico Madrid and Lokomotiv Moscow at Wednesday, Nov. 25, 2020. Maradona died Wednesday at the age of 60. (AP PhotoManu Fernandez)

“He thinks it’s him,” Pelé once said. “But we all really know who was the best.”

Being born 20 years apart meant the duo never settled their rivalry on the pitch.

Interviewed once by Pelé, Maradona playfully asked the Brazilian how he accumulated an apparent goal total of 1,281. 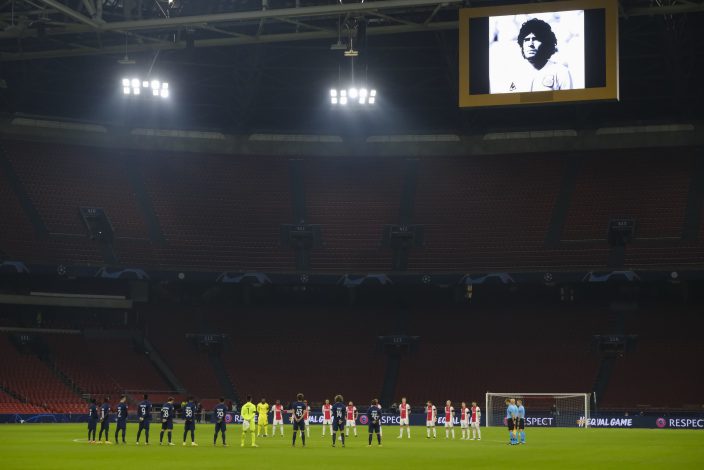 Ajax players, wearing black mourning arm bands, Midtjylland players and the referee and linesmen observe a minute of silence as they commemorate Argentinian soccer great Diego Maradona, picture seen above, prior to the group D Champions League soccer match between Ajax and Midtjylland at the Johan Cruyff ArenA in Amsterdam, Netherlands, Wednesday, Nov. 25, 2020. Maradona, who scored the "Hand of God" goal in 1986 and led his country to that year's World Cup title before later struggling with cocaine use and obesity, has died. He was 60. (AP PhotoPatrick Post)

“Who did you score them against?” Maradona asked. “Your nephews in the backyard?”

But behind the enmity, there was a mutual admiration that was evident through the grief as Pele paid tribute to Maradona, who died Wednesday at the age of 60.

“I have lost a dear friend, and the world has lost a legend," the 80-year-old Pelé said. "One day, I hope, we will play football together in the sky.”

The sadness across Argentina was articulated by one of the few players who comes close to matching Maradona's artistry with the ball.

“He leaves us," Argentine forward Lionel Messi said, “but he is not gone because Diego is eternal.”

The 33-year-old Messi still strives to emulate his hero by winning a World Cup with Argentina, a triumph that could settle the 21st century's version of the Maradona-Pelé debate as he duels with Cristiano Ronaldo for soccer greatness.

Ronaldo, who has won five FIFA player of the year awards to Messi's six, remembered Maradona as an “eternal genius.”

“One of the best ever,” the Portugal and Juventus forward said. “An unrivaled magician. He departs too soon but leaves a legacy with no limits and an emptiness that will never be filled.”

Maradona was undoubtedly a flawed genius, who reveled in the darker side of his character. Beyond the bans for drugs — including being sent home from the 1994 World Cup — there was a sense of pride at outwitting the referee by punching the ball into the net as Argentina beat England at the 1986 FIFA tournament.

It was a moment of infamy, four years after Britain reclaimed the Falkland Islands following a 1982 invasion by Argentina, that was recalled by former England striker Gary Lineker.

“By some distance the best player of my generation and arguably the greatest of all time," said Lineker, the top scorer at the 1986 World Cup who followed Maradona in joining Barcelona. “After a blessed but troubled life, hopefully he’ll finally find some comfort in the hands of God.”

Maradona's death was announced as teams in Europe were preparing to play Champions League matches, which were preceded by a moment of silence.

“Diego may be eternal now, but for forever, Diego will also have a most prominent place in the incredible story of all football fairytales,” Infantino said.

“It was one of the thrills of my life when I got to meet him,” Los Angeles Lakers great Magic Johnson wrote on Instagram, alongside a photo of him hugging Maradona.

Rafael Nadal, the Spanish tennis star who has won a record-equaling 20 Grand Slam men’s singles titles, spoke of the void in sports. “Today the world of sport in general and football in particular have a void," Nadal tweeted. “Maradona was one of the greatest sportsmen in history.”