Philip Rivers has endured worse injuries over his 17-year career.

In November 2017, he cleared the concussion protocol just in time to make his 186th consecutive start. He played the 2007 AFC championship game with a torn anterior cruciate ligament in his left knee. Heck, he even made it back less than eight months later for the 2008 season opener, or as he might call it, start No. 33. Then there were all those other painful weeks that never made the weekly injury report.

So you can bet the Indianapolis Colts quarterback isn't going to let a gimpy big toe on his right foot prevent him from extending the streak to No. 235 on Sunday in a key division showdown against Tennessee. Not a chance. 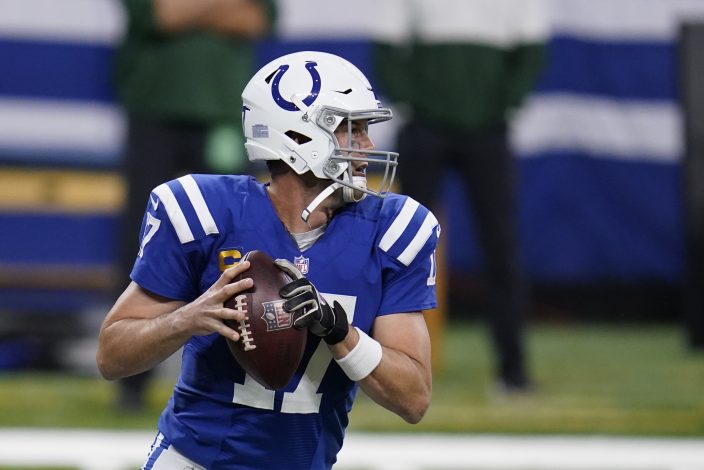 Indianapolis Colts quarterback Philip Rivers (17) looks to throw during the first half of an NFL football game against the Green Bay Packers, Sunday, Nov. 22, 2020, in Indianapolis. (AP PhotoMichael Conroy)

“It’s certainly important to me and I’m thankful that I’ve been healthy enough to be out there," Rivers said Wednesday. “I do think there is something about that availability being there each and every week. I think there is a fine line there. You don’t just try to keep that alive to keep it alive. This isn’t one of those instances."

Rivers has started every game since cracking the San Diego Chargers lineup in the 2006 season opener.

Only 10 players in league history have equaled or surpassed the 234 starts the eight-time Pro Bowler has made, and he can reach another major milestone Sunday — breaking one tie, with Eli Manning, and moving into another with Charles Woodson for No. 9 all time.

Manning and Rivers were taken with the first and fourth overall picks in the 2004 NFL draft, then were swapped by the Chargers and New York Giants. That deal worked out for both teams and both quarterbacks, who went on to have long, distinguished careers.

But an admittedly poor decision early in the fourth quarter last week nearly put Rivers' streak in jeopardy. As the 38-year-old Rivers attempted to make a block against Green Bay, leading with his right shoulder, he hurt the toe. Rivers limped to the line of scrimmage for the next play and eventually sought treatment on the sideline.

“He definitely did not follow instructions on that play, I can tell you that," coach Frank Reich said. “There was never any design where he would be putting his shoulder into the chest of another defensive lineman. That’s for sure.”

Though Rivers finished the game, a 34-31 overtime win, Reich has been playing it safe all week. Rivers has been held out of practice, and with players and coaches taking Thursday off, won't return to the field until at least Friday.

Reich remains hopeful the extra rest will help Rivers recover in time for Sunday, when the Colts (7-3) can take the outright lead in the AFC South. Indy already beat the Titans (7-3) on their home turf.

“I feel pretty good. I think I definitely could have gone today," Rivers said. “I think it’s a little bit of, probably the smart thing to do, then me getting better at my stubbornness as well. I think it’s the best approach. Just a couple more days of rest and I'll be ready to be out there on Friday.”

The timing couldn't have been worse.

Indy has won two straight and four of its last five with Rivers rounding into form. He has gone 130 of 195 with 1,456 yards, 10 touchdowns and three interceptions in the last five games, twice rallying the Colts from double-digit deficits. Last week might have been his top game since he signed with Indy in March.

With so much unfinished business, Rivers hopes to put off his next job — high school football coach in Alabama — at least a little longer.

For now, he'd rather help the Colts earn their second playoff berth in six years, win their first division crown since 2014 and perhaps even reach the elusive Super Bowl for the first time in more than a decade — and first time in his career.

To do that, though, he knows the priority must be staying reliably healthy.

“You think about all the things you could deal with, they sound a little more legit than a toe," Rivers said. “We’ve all heard of guys that have had different toes that nagged them, and things. Thinking about defensive backs, running backs and all those guys, I can only imagine how tough it was to deal with something. It’s a little different, but thankfully my position there is not a lot of cutting. I’ll be good. It’s already weird enough, so I don’t think I can tweak it anymore."