On a Minnesota offense that features Dalvin Cook, who leads the league in rushing yards per game, and has big-play rookie receiver Justin Jefferson garnering headlines, seven-year veteran Adam Thielen is still an important piece for quarterback Kirk Cousins.

Look no further than last week, when nearing the goal line against the Dallas Cowboys, Cousins looked often to his favorite end-zone target. Thielen scored a pair of short touchdowns in an eventual 31-28 loss.

Minnesota is hoping they don’t get a reminder of Thielen’s importance while he is absent. 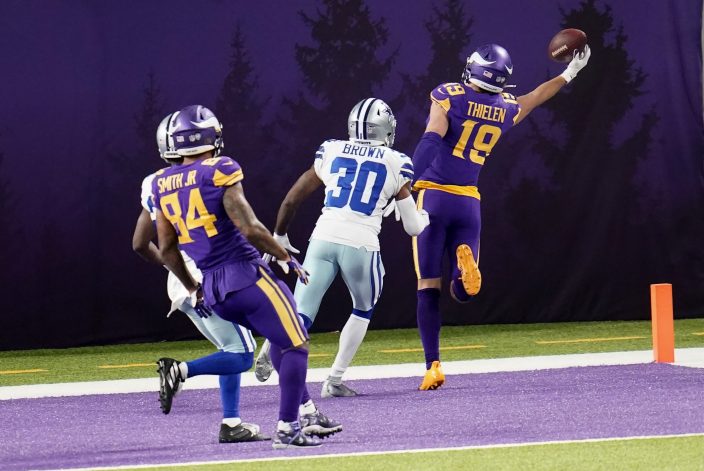 Thielen, who leads the league with 11 receiving touchdowns, was placed on the reserve/COVID-19 list this week. His availability for Sunday’s home game against Carolina was still in question as the team started its week of practice.

“Yeah, I don’t know, honestly,” Vikings coach Mike Zimmer said of Thielen’s potential to play Sunday. “Obviously he’s in the COVID protocol, and we’ll just see. When you get in these protocols, it’s always about, ‘What’s the next test, and the next test?’ So we’ll just have to see as the week goes on.”

Thielen went from an undrafted surprise out of Minnesota State to being a two-time Pro Bowl receiver. Now the 30-year-old Thielen might be the unheralded cog in Minnesota's eighth-ranked offense with Cook and Jefferson attracting so much attention. The Vikings have a legitimate trio of playmakers to stress defenses. 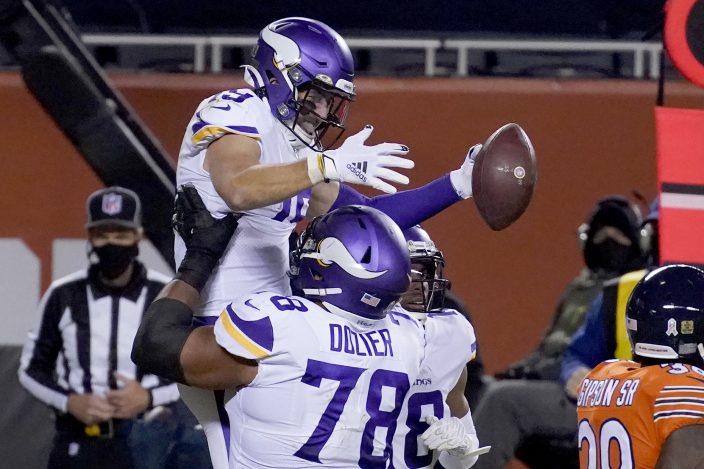 Minnesota Vikings wide receiver Adam Thielen is congratulated by teammate Dakota Dozier (78) after catching a touchdown pass during the second half of an NFL football game against the Chicago Bears Monday, Nov. 16, 2020, in Chicago. (AP PhotoCharles Rex Arbogast)

Cook, while missing one game, is 10 yards behind Derrick Henry for the overall rushing lead with 1,069 yards. Jefferson has ably filled in for the traded Stefon Diggs, pushing for records in a standout rookie receiving class.

Cook, Jefferson and Thielen all rank in the top three graded players at their position by Pro Football Focus.

Jefferson’s 848 receiving yards lead all rookies and are already the third most in Vikings history. It’s the third-highest total for a player through 10 games, trailing just Anquan Boldin, who had 876 receiving yards in 2003 for Arizona, and Marques Colston’s 869 yards in 2006 for New Orleans.

“I think he’s a great example of a guy who does his job to a high ability,” Thielen said of Jefferson. “He’s a guy who, when he gets man coverage and it’s one on one, he does a great job of creating separation and getting open. … He’s got a skill set that he can do a lot of things for this offense. When he gets a one on one, he’s a tough guy to guard.”

With Jefferson keeping defenses honest, Thielen keeps producing on the other side. He is tied for third in the league in total touchdowns, three behind the league-leading Cook.

Thielen and Jefferson have nearly split the receiving load equally with 49 and 45 receptions, respectively, but Thielen has become an end-zone target for Cousins while Jefferson thrives with big plays.

Thielen has already produced his career high in touchdowns, two more than his previous best in 2018. He has at least four games with two receiving touchdowns this season, most in the NFL, three behind Minnesota's record set by Hall of Famer Cris Carter in 1995. Thielen’s 11 touchdowns in the red zone are also the most in the league this season and the most since Carter had 13 such touchdowns in 1995.

“He’s sure-handed,” Jefferson said of Thielen’s prowess in the end zone. “His catching ability is phenomenal. He’s able to make those hard catches that you have to adjust to. He can also get his two feet in, in the end zone as well, so he’s got the toe tap.”

Thielen’s productivity has pushed the Vikings to a league-best red-zone rate (78.3 percent). Of the 32 trips inside the 20-yard line, Minnesota has scored 25 times, including 24 touchdowns. The Vikings score at a 90% rate in goal-to-go situations.

“I look back now at 10 weeks and you see really good coaching, really good scheme that is continuing to get Adam open in those situations,” Cousins said. “That’s why you see so much production from Adam. They’re putting him in a position to create that, and he goes out and makes tremendous plays. It gives them all the more reason to go back the next week and get him opportunities again.”

Quite suddenly, if only for a free ...