Government and election officials frequently call on shredding companies to dispose of personal and sensitive documents that are no longer needed.

But in a suburban county of Atlanta this week, those routine waste removal appointments were twisted into yet another election misinformation story when social media users falsely claimed shredding trucks were destroying ballots and “evidence of voter fraud.”

The unfounded allegations continue to spread online as Georgia officials carry out a machine recount of ballots after certified results showed Joe Biden had a 12,670-vote lead over President Donald Trump. Trump requested the recount, which follows a statewide hand tally. 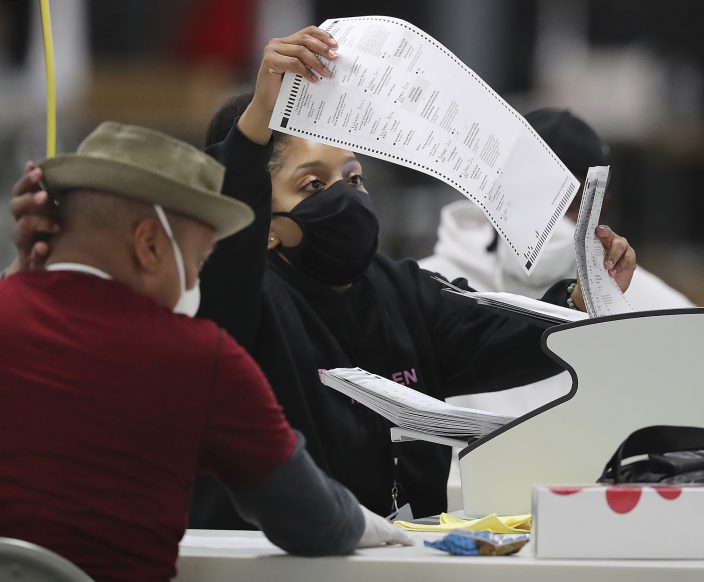 L. Lin Wood Jr., a conservative attorney who had unsuccessfully sued in an attempt to block the certification of Georgia’s election results, on Tuesday shared a series of videos taken by a Georgia resident. They showed a shredding truck outside the West Park Government Center in Marietta.

“Evidence of voter fraud is being destroyed in Cobb County, GA TODAY,” Wood captioned one of his tweets. “Many people, powerful & not so powerful, are going to PRISON.”

The real explanation for the truck’s visit was far less scandalous: a routine shredding of county tax documents. 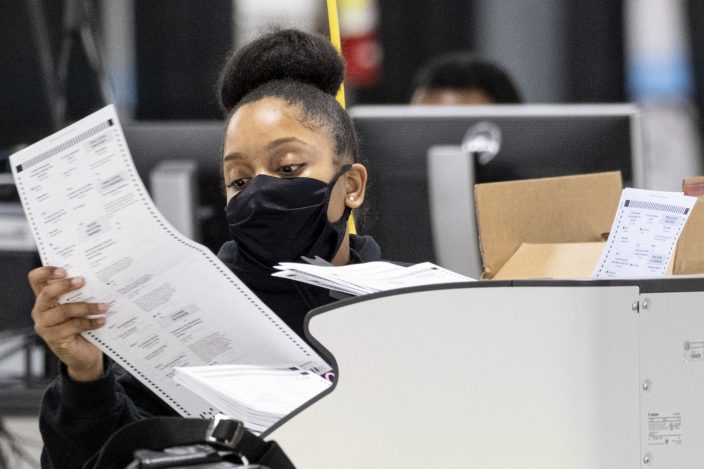 A worker scans ballots as the presidential recount process gets under way Tuesday afternoon, Nov. 24, 2020 in the DeKalb County, Ga. (AP PhotoBen Gray)

The county tax commissioner’s office, which shares a building with the county’s main elections office, has documents shredded twice a month, according to Ross Cavitt, communications director for the county.

“No items from Cobb Elections were involved,” Cavitt told The Associated Press in an email.

The false claims built on similar rumors from last week, when the same Georgia resident captured photos and video of a truck destroying election-related waste outside the Jim R. Miller Event Center in Marietta and claimed it was evidence of “ballots being shredded.”

After Wood amplified those photos and videos on Friday, Cobb County officials refuted the claim, explaining that the shredding company was summoned to destroy non-relevant election materials, as happens after all elections.

“Everything of consequence, including the ballots, absentee ballot applications with signatures, and anything else used in the count or re-tally remains on file,” Janine Eveler, the county’s director of elections and voter registration, said in a statement.

Some of the photos shared on Friday appeared to show a trash can with a paper labeled “ABSENTEE BALLOT” inside. But Eveler said that was an inner privacy envelope used by voters to seal absentee ballots, and had “no evidentiary value.” County officials will hold on to the actual absentee ballots, as well as the outer envelopes signed by voters, for two years.

Wood did not respond to a telephone call and email seeking comment.

Despite the county’s responses, Wood’s tweets with the debunked claims continued to receive massive engagement on Wednesday, collectively amassing more than 200,000 retweets. And a separate Facebook user’s post falsely claiming a shredding company was “hired by Democrats” to destroy evidence was viewed nearly 150,000 times.

County officials told the AP they have not seen any evidence of fraud or anomalies in vote tabulation in the 2020 election.

“People nowadays, they post stuff immediately without asking any questions and without any proper context, and it spreads like wildfire,” Cavitt said of the false claims.