After the Champions League paused to pay tribute to Diego Maradona, defending champion Bayern Munich and Manchester City won on Wednesday to advance to the knockout rounds.

The Argentina great’s death was announced two hours before the first games kicked off. A minute’s silence was observed by players before each of the eight games, which were all played in empty stadiums because of the coronavirus pandemic. 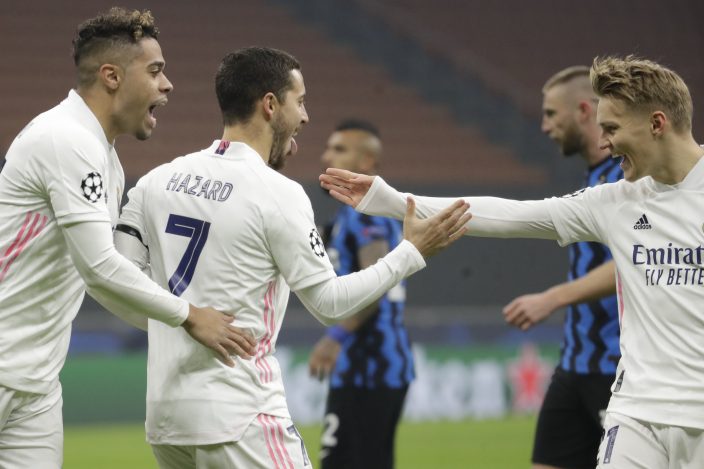 City's 1-0 win at Olympiakos means six elite teams are already into the last 16 with two rounds of the group stage still to play. Barcelona, Juventus, Chelsea and Sevilla advanced on Tuesday.

Liverpool wasted the chance to join them, as the 2019 champion conceded its first goals in this season’s competition to lose 2-0 at home against Atalanta.

Eden Hazard’s seventh-minute penalty in a 2-0 win at Inter Milan helped ensure Real Madrid is back on track after a shaky start to the campaign. Inter is last in group B and facing elimination. 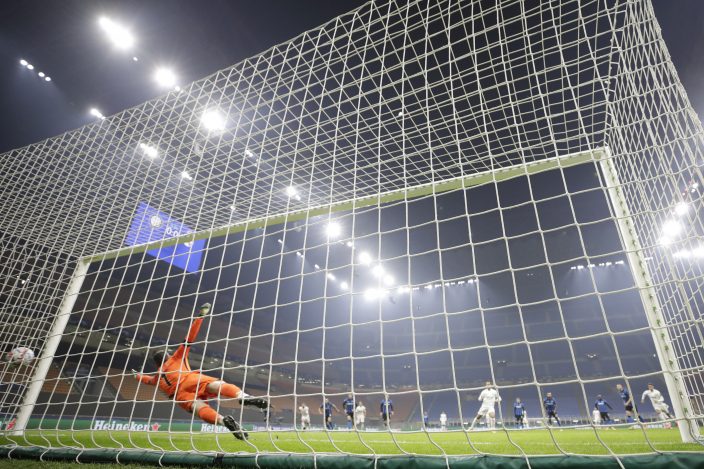 Marseille, the 1993 European champion, and debutant Midtjylland cannot advance after losing their fourth straight games, against Porto and Ajax, respectively.

Bayern’s victory was its 15th straight in the Champions League dating to the start of last season. 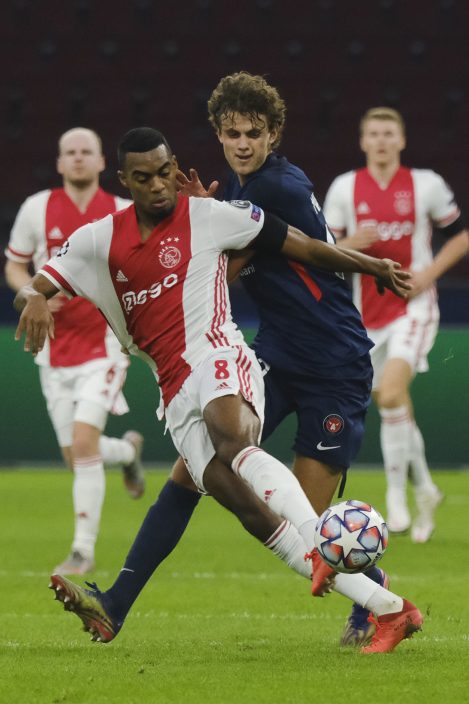 Lewandowski opened the scoring in the 43rd, picking up the rebound when Thomas Müller’s shot was saved. The Poland captain now trails only Cristiano Ronaldo’s 131 Champions League goals and Lionel Messi on 118.

Roca was sent off with the score at 2-0 though Leroy Sané soon extended the lead with a soaring header. 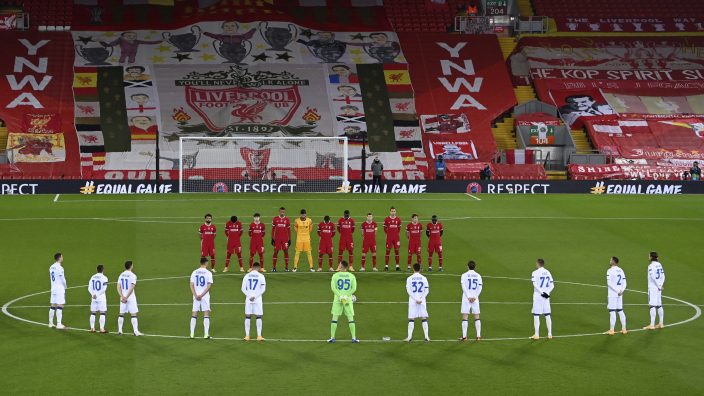 Liverpool, background, and Atalanta players observe a moment of silence in memory of soccer legend Diego Armando Maradona before the start of the Champions League group D soccer match between Liverpool and Atalanta at Anfield stadium in Liverpool, England, Wednesday, Nov. 25, 2020. Maradona died from a heart attack on Wednesday at his home in Buenos Aires. (Laurence GriffithsPool via AP)

Bayern’s maximum 12 points in Group A is seven clear of Atlético Madrid, which was held 0-0 at home to Lokomotiv Moscow.

Liverpool cruised to a 5-0 win at Atalanta three weeks ago, and had never lost a Champions League group-stage game at home under coach Jurgen Klopp. 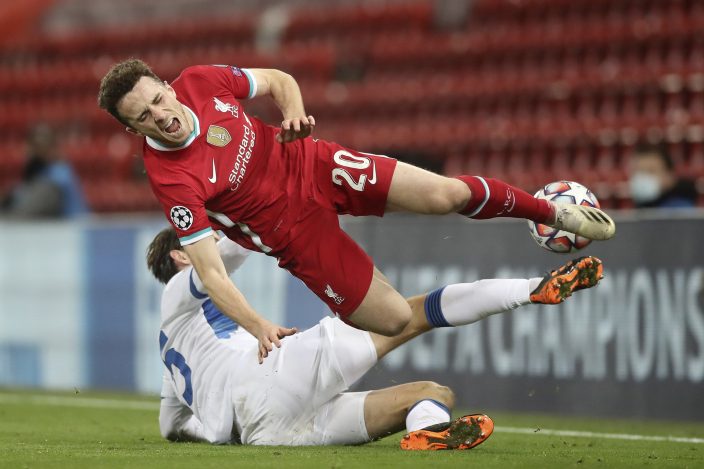 With first-choice defenders injured and rested, Liverpool was deservedly beaten by Atalanta which has now won both its away matches while failing to win either home game.

Josip Iličić and Robin Gosens scored the goals early in the second half, to earn three points that help Atalanta keep pace with Ajax behind Group D leader Liverpool.

Ajax’s first goal in a 3-1 win over Midtjylland came from 18-year-old midfielder Ryan Gravenberch’s curling shot that went in off the underside of the bar. 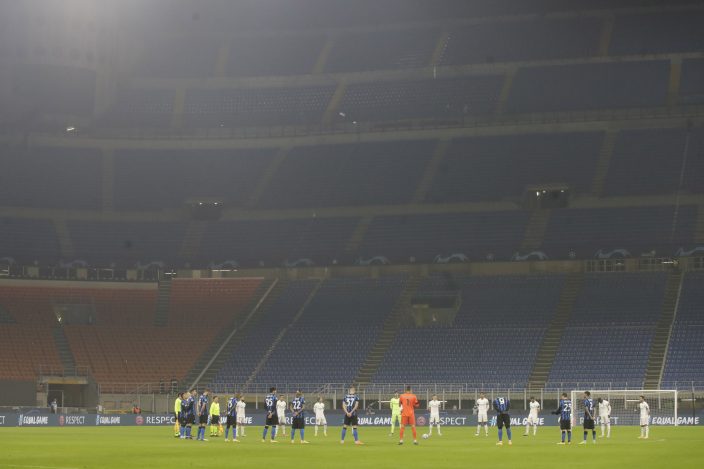 Ajax visits Anfield next Tuesday for the first time since the 1966-67 European Cup.

Real Madrid’s back-to-back wins over Inter Milan have repaired the damage of a surprise opening loss at home to Shakhtar Donetsk last month. 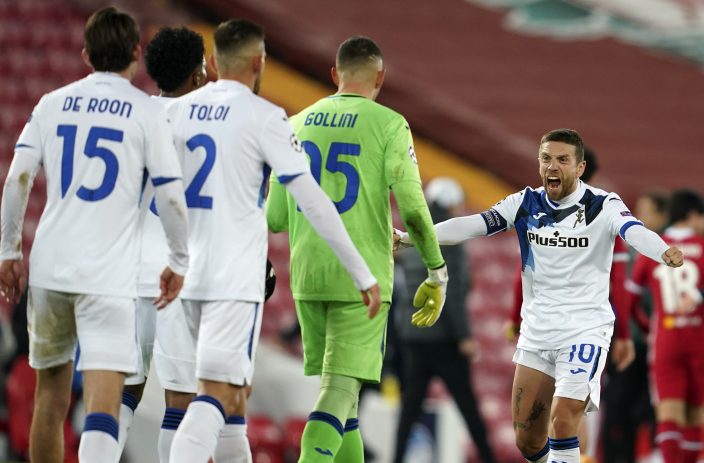 A 2-0 win at San Siro was also the first time Madrid had beaten either Inter or AC Milan at the iconic stadium, though coach Zinedine Zidane’s team did win the 2016 final there against city rival Atlético.

Hazard’s early penalty was his first goal in the Champions League for three years, and Rodrygo’s second-half header secured the points.

Inter played most of the game with 10 men after Chile midfielder Arturo Vidal was sent off. Vidal was shown two yellow cards within seconds when berating referee Anthony Taylor for a penalty kick not being awarded.

Madrid still trails Group B leader Borussia Mönchengladbach by one point, after the German side cruised to a 4-0 win over Shakhtar. Inter, though, is six points behind Gladbach with two games to go.

Denied regular playing time in the Premier League, 20-year-old Phil Foden made use of a start from coach Pep Guardiola to score in the 36th and seal Manchester City’s 1-0 win at Olympiakos.

City has a perfect four-win record to advance to the knockout rounds for an eighth straight season, and will likely be joined by Porto.

The two-time European champion won 2-0 at Marseille which slumped to a 13th straight loss in the competition dating back to the 2011-12 season.