Defensive tackle Abry Jones, the longest-tenured player on Jacksonville’s roster, arrived at practice Wednesday with a visor on his head and a play-calling sheet in his hand.

Jones was ready for his new, albeit temporary, role with the team.

Jones helped fill some gaping holes on Jacksonville’s defensive staff, which was without coordinator Todd Wash and two more assistants because of COVID-19 testing and contact tracing. Wash, defensive line coach Jason Rebrovich and defensive assistant Dwayne Stukes already have been ruled out for Sunday’s game against Cleveland (7-3). It will be the second consecutive game missed for Rebrovich. 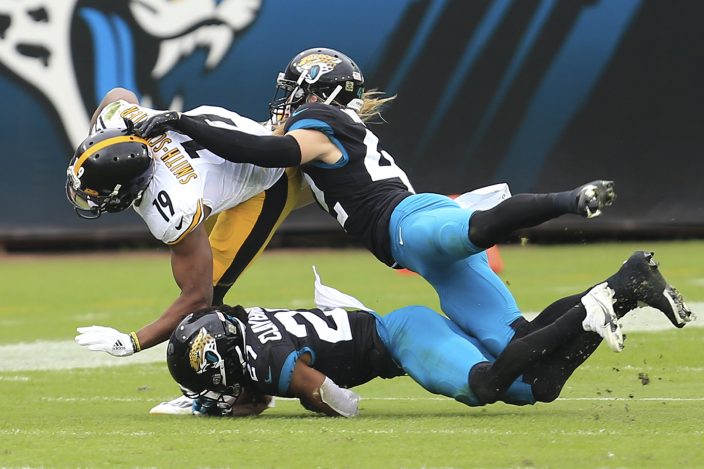 Pittsburgh Steelers wide receiver JuJu Smith-Schuster (19) is bright down after a reception by Jacksonville Jaguars cornerback Chris Claybrooks, bottom and safety Andrew Wingard (42) during the second half of an NFL football game, Sunday, Nov. 22, 2020, in Jacksonville, Fla. (AP PhotoMatt Stamey)

“Coach Marrone did a great job bringing enthusiasm and energy to the defense, got the calls in quickly and crisply, so that’s all you can really ask for from him,” linebacker Joe Schobert said. “His coaching points in between snaps were not up to par, what we’re used to, but everything else, I think he did a good job.”

Secondary/safeties coach Joe Dana will call the defense against the Browns and assistant linebackers coach Tony Gilbert will handle the D-line. Assistant Tyler Wolf will take care of Gilbert’s responsibilities from the coaching booth. 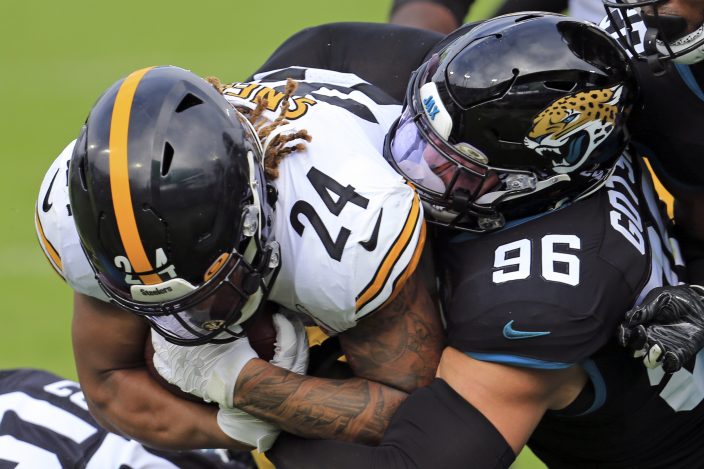 “That’s something that I think most teams really prepare for in case of an emergency," Marrone said. “And obviously with COVID, everything is kind of ramped up to making sure that we’re all backed up in everything that we do.”

Jones probably didn’t see this coming, even though he missed the last four games because of an ankle injury. He took his added duties seriously, though. He even dressed the part by wearing a lightweight jacket with shorts and pulling his socks up high.

“I think he needs to work on his authoritative stance,” Schobert said. “I don’t think the guys are really listening to him as well as they should have or as well as they would a real coach. I think he had a little bit of struggles of getting talk back, a little chatter, but he was out there enjoying it.” 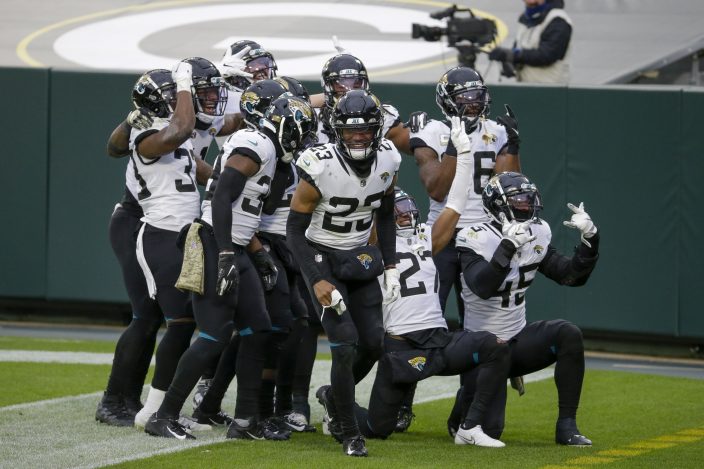 The Jacksonville Jaguars defense celebrates after Sidney Jones intercepted a pass during the second half of an NFL football game against the Green Bay Packers Sunday, Nov. 15, 2020, in Green Bay, Wis. (AP PhotoMike Roemer)

Don’t expect Jones to make it a long-term gig, either.

“I heard after practice he said coaching’s for the birds, so I don’t know if he’s got a second career after he’s done playing,” Schobert said.

The Jaguars (1-9) have lost nine in a row, matching the longest, single-season skid in franchise history. So having a little fun with their current situation provided a much-needed break from a season in which most everyone expects will end with wholesale changes to the front office, coaching staff and locker room.

Add them all up and Jacksonville is down a dozen defenders from its projected two-deep depth chart — a big reason the Jaguars rank 30th in the NFL in scoring defense, giving up 29.8 points a game.

“It’s been one heck of an adjustment, a lot of adversity that the defense has faced,” Schobert said. “It’s the NFL: You get paid to be out there on Sunday and play football games no matter what’s going on. … Whoever’s out there has to be able to do their job and do it well, and we have to have trust in them.”