Ten games into the 2020 season, the Raiders are in the same position they were a year ago.

The manner in which they got to 6-4 this year compared to last year provides them confidence that they won’t falter down the stretch again and miss the playoffs for the 17th time in 18 seasons.

Derek Carr has the offense performing at an extremely high level so the Raiders believe they can compete with anyone as evidenced by going toe to toe with in splitting two games with the defending Super Bow champion Kansas City Chiefs. 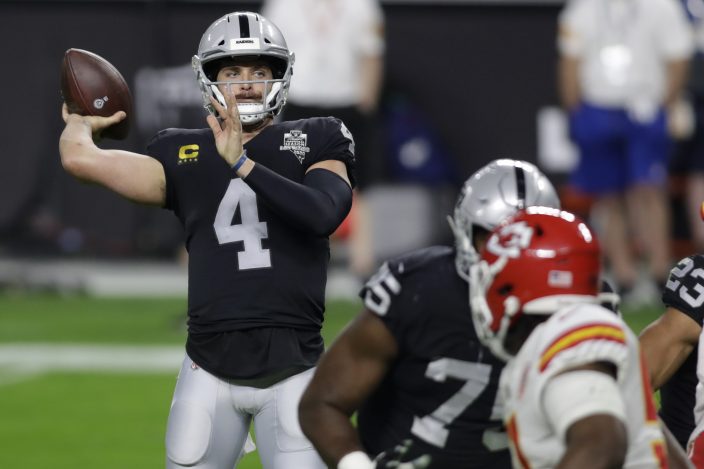 “There’s just something about this team; the teams we’ve lost to, how we’ve lost and things like that,” Carr said Wednesday. “The teams that we’ve played with and beat and things like that. We’re definitely a better team this year, but we right now have to, and I mean have to, finish this season better than we did last year. And I believe that we will. I’m hopeful and I believe that we will and I think that it’s different, I feel it’s different, but time will tell if it’s different.”

The Raiders got to 6-4 a year ago thanks to a three-game home winning streak against Detroit, the Chargers and Cincinnati. But even the final game of that run showed some flaws as the Raiders only beat the lowly Bengals 17-10 in a sign that the offense might begin slipping.

That started to happen the following week as they lost 34-3 on the road against the struggling New York Jets, followed by a 40-9 loss at Kansas City. The skid extended to four games with back-to-back losses to close out the Oakland Coliseum to Tennessee and Jacksonville before a Week 16 win at the Chargers provided a sliver of hope.

The Raiders went into the finale needing a win and help, but got neither and wrapped up the season with a 1-5 stretch following a 16-15 loss at Denver.

The Raiders ranked last in the NFL in scoring over the final six weeks with just 14.7 points per game.

Las Vegas is a completely different team offensively this season as Carr has taken his game to another level with a willingness to throw deep more often and a better ability to turn bad plays into good ones by scrambling.

He’s performing even better than he did in 2016, when the Raiders went 12-4 and he earned MVP votes.

While the defense still struggles to generate sacks or turnovers at a high rate, the offense is scoring 6.1 more points per game, ranking eighth in the league at 28.6 points per game.

That’s the biggest difference from a year ago when the Raiders finished at under 20 points per game for a third straight season.

“I could care less about 6-4, I just care what we do at the end,” Gruden said. “This comparing stuff is for ESPN analysts. Those days are in my past. We got a long way to go, but we’re getting progress.”

The schedule also works in Las Vegas’ favor as the Raiders have only two games left against teams with winning records: home games in December against Indianapolis (7-3) and Miami (6-4).

The addition of a seventh playoff team in each conference also will help, but it will likely come down to whether the Raiders can maintain the level of play they’ve had the past month in winning three straight games before a last-minute loss to Kansas City.

“This year we’re a totally different team,” defensive tackle Johnathan Hankins said. “I feel like we are definitely as a defense gelled together. I feel like we know what we can do out there. We just have to put it together all four quarters and make a run.”