Drew Lock appreciates John Elway’s vote of confidence. He just wishes to accelerate his journey from the “I’ve-got-your-back” phase of his career to the pats-on-the-back stage.

Elway praised Lock on the team’s website this week, suggesting the second-year pro has been resilient while traversing the usual growing pains for a QB in a most unusual of seasons. 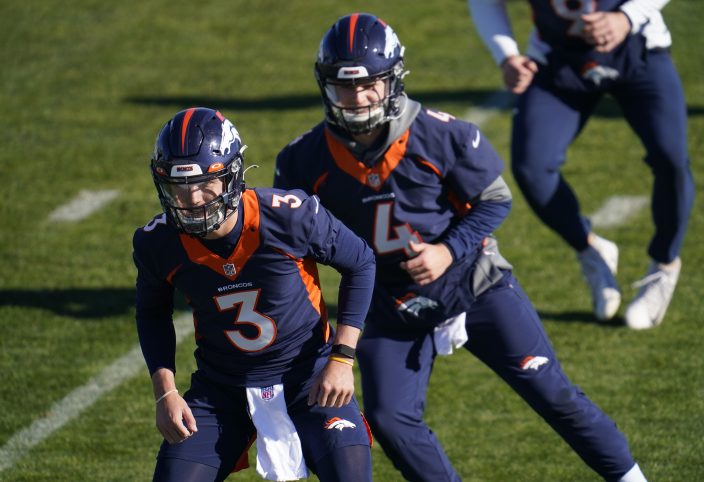 Not so much the 11 interceptions. More so the seven touchdown throws.

Not so much the five losses in games he’s started but the three wins, including a huge comeback against the Chargers and a solid performance last week when the Broncos (4-6) handed the Dolphins (6-4) their first loss in seven weeks.

“It means a lot to hear from a guy like that, to hear from technically your boss,” Lock said Wednesday when asked about Elway’s comments.

“But, I want to have him be able to answer questions about how good we were in the first half and how good we were all game instead of those resilient answers, pushing through the tough stuff.

“It’s time for us to go out and play well for four quarters and get this thing rolling.”

The NFC’s top team, the New Orleans Saints (8-2) visit the Broncos (4-6) this weekend with Taysom Hill likely to get his second career start after his outstanding debut last week in place of an injured Drew Brees.

It would mark the third time this season that Lock, who'll be starting his 14th game Sunday, has more experience than the opposing quarterback.

Elway went all-in on Lock after he won four of five starts last December, but Lock sprained his throwing shoulder in Week 2 and missed two games. He returned to lead Denver to a rare win at New England, but his play has been inconsistent ever since.

After throwing a career-worst four interceptions at Las Vegas, Lock misfired on his first half dozen passes last weekend against the Dolphins, who picked off one of them. But he bounced back to throw for 270 yards in Denver's 20-13 win.

Unlike many QBs who have rolled through Denver, Lock has never shied away from playing in the shadows of Elway and Peyton Manning. Lock calls it a big perk of his job to have regular conversations with a Hall of Fame QB and one should be joining him in Canton in 2021.

Elway said those chats have shown him a side of Lock the public doesn’t see.

“I’m excited about him and he’s got the right mentality because he wants to be great,” Elway told the team’s website. “And I think he’ll continue to work on that, but obviously when you’re going through it as a young quarterback you’re going to see a lot of different things, a lot of different looks. Those defensive coordinators know when they’ve got a young quarterback, they’ll try to confuse him.

“So I think that he’s done a heck of a job going through that. Every snap he takes this year he’s going to continue to get better and it’s just going to help him in the future.”

Elway also praised Vic Fangio, who is now 11-15 in his second season as Broncos head coach, for navigating a pandemic season that also features a new offensive staff and several rookie starters who didn’t get a regular offseason or preseason games to prepare.

“This (season) has been totally upside-down from what we’re used to and what he’s used to, so I’m proud of Vic,” Elway said. “And I think the growth that he’s shown as a head coach, how he’s handled the football team and kept all the players focused ... he’s done a tremendous job.”

Elway also spoke of his bout with the novel coronavirus that kept him away from team headquarters for a couple of weeks.

“I feel great,” Elway said. “I’m glad I was able to get through it and I got great care here from our doctors. And the hardest thing I think was the quarantine, not being able to see anybody for about 10 days. So, it was a little lonely there.”

Team president Joe Ellis was out even longer after contracting COVID-19 at the same time Elway did. Ellis said Sunday that he felt “tired for 14 days.”

With a surge in COVID-19 cases in Colorado, the Broncos aren’t allowing any fans into the stadium the rest of the season.

“We want to make sure that hopefully some day we get this whole thing behind us,” Elway said, “and I think it’s much better to be safer now than sorry.”

NOTES: No one should be surprised Peyton Manning is a Hall of Fame semifinalist in his first year of eligibility. Fangio sure isn't. “I figured out Peyton was going to be pretty special when he was about 14 or 15 years old and he would come over to the Saints facility and throw pass skelly (passes to running backs in skeleton drills) with us some days with our team in the offseason,” Fangio said.

Yankees get Jameson Taillon from Pirates for 4 prospect ...

The Yankees made a second offseaso ...