Stefon Diggs was preparing for the start of practice Wednesday when Buffalo Bills offensive line coach Bobby Johnson approached and asked how the receiver was doing.

Diggs surprised even himself with his quick and genuine response.

“I’m like, ‘I’m happy,’” Diggs said, recalling how a simple interaction grew into a personal revelation nine months into his first season in Buffalo. 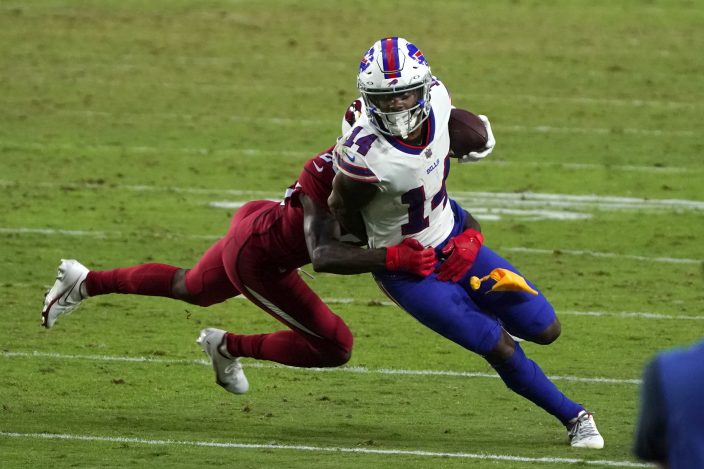 FILE- In this Sunday, Nov. 15, 2020, file photo, Buffalo Bills wide receiver Stefon Diggs (14) tries to turn upfield after a reception during an NFL football game against the Arizona Cardinals, in Glendale, Ariz. Painted rightly or wrongly as yet another one of the NFL's many diva receivers for his various sideline outbursts during his first five seasons in Minnesota, Diggs has put behind his mercurial past by quickly warming up to his new surroundings. (AP PhotoRick Scuteri, File)

“I said it with a smile because I’ve been busting my (rear) for a long time,” he said. “But mentally, being in the right place and pushing in the right direction: I’ve always been trying to be that guy, trying to have a positive energy. And I’m just happy to be where I am.”

Characterized rightly or wrongly as one of the NFL’s many diva receivers for his several sideline outbursts during his first five seasons in Minnesota, Diggs has put his mercurial past behind by warming up to his new surroundings.

His production has certainly helped smooth the transition, with Diggs ranking second in the NFL with 73 catches and 906 yards.

But the receiver stresses his upbeat mood goes beyond numbers and instead reflects a shift in approach he demanded from himself this offseason during a personal re-evaluation which occurred well before being traded to Buffalo in March.

“Whether I was staying or whether I was leaving, I feel like my process after that year, I was going to handle things in a certain kind of way,” Diggs said, referring in part to last season, when he drew more than $200,000 in fines for skipping two days of team activities following a dispiriting loss at Chicago.

“I feel like I learned so much from my previous situation that I kind of carried it over in trying to turn over a new leaf and try to handle things a lot differently than I did before,” he said. “I went into this new year trying to be the best player, best teammate. And it’s been working out."

The AFC East-leading Bills (7-3), who come out of their bye week off preparing to host the Chargers (3-7) on Sunday, have been the benefactors.

On the field, Diggs has played a key role in sparking a big jump in Josh Allen’s development three seasons into the quarterback’s career. Allen’s 2,871 yards passing are 216 short from matching his career-high total last year, while his 68.4 percent completion rate is 12 points better than his combined total from his first two seasons.

Off the field, Diggs has earned praise for his work ethic and team-first approach. Whether with the media or in meeting rooms, he has often deflected attention to his teammates and voiced a willingness to share the ball.

“The yards, everyone can pull up and look on the computer and find the numbers, but I believe it goes beyond that,” coach Sean McDermott said of Diggs’ impact. “Just the mentality, the attitude, the energy, the toughness, the unselfishness. You see other guys catch balls and he’s blocking for them. You see our run game get going, he’s blocking for them. As a head coach, I really appreciate that.”

It began shortly after Diggs was acquired, when Allen reached out and the two began playing video games together. It followed into a summer workout in Florida, which Allen helped organize with several offensive players.

“Typically, you’re thinking of a guy who was portrayed by the media as a diva and this and that. I didn’t really know what to expect,” Allen recalled. “But he was there on time. In the workout drills with us, going through everything we were going through, trying to learn. And then after, when we went out to dinner, he wanted to be there. It surprised me just how much of a team guy he was from the start.”

Diggs and Allen have become fast friends, with the receiver playfully referring to the quarterback as “a goofball.”

Easy as they’ve made their instant chemistry appear, Diggs said it's the result of countless hours of discussions, practice and poring over the playbook to make up for a coronavirus pandemic-shortened offseason.

Diggs noted simply following the quarterback's lead by saying: “Josh didn’t make any excuses, and I damn sure would never make any excuse for myself.”

With six games left, Diggs shrugs off questions of being in position to break several single-season franchise records held by Eric Moulds, who had 1,368 yards receiving in 1998, and 100 catches in 2002.

“Whether they’re broken or not, of course I’m going to be thankful. But I’m chasing something much bigger than that,” he said.

Selected in the fifth round out of Maryland, Diggs is driven by the desire to measure himself against the player he believes he can become.

This season he said, represents an indication of how far he’s come, which is a reason he can acknowledge being happy.

“I feel like I took the necessary time last year to grow and learn from all those years past so I can be prepared for my new opportunity,” Diggs said. “I’m thankful, I’d say, more than anything. I’m thankful to be here.”