BERLIN — Germany has passed the grim milestone of more than 15,000 deaths from the coronavirus.

The Robert Koch Institute, the country’s disease control center, said Thursday that another 389 deaths were recorded overnight, bringing the total since the start of the pandemic to 15,160.

Germany has seen 983,588 total cases of the coronavirus after adding 22,368 overnight, the agency said. 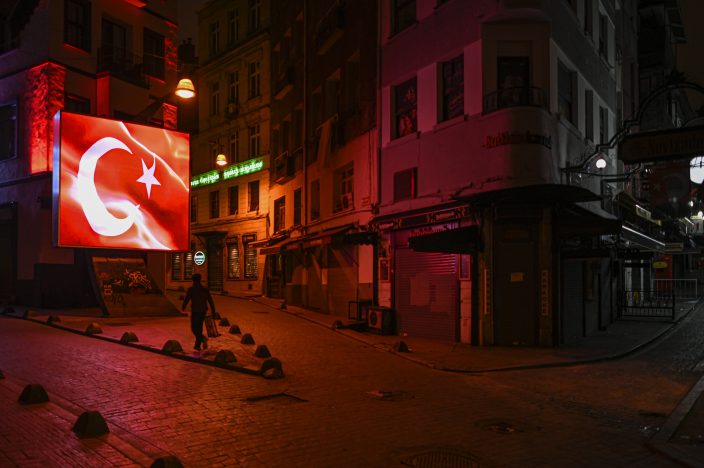 A man walks in Istanbul, late Wednesday, Nov. 25, 2020. The number of daily COVID-19 infections in Turkey jumped to above 28,000 on Wednesday after, in a surprise development, the government resumed publishing all positive cases and not just the number of patients being treated for symptoms of the coronavirus. The government was accused of hiding the full extent of the virus spread in Turkey, after it was revealed that the number of asymptomatic cases were not being included in data published since July 29. (AP Photo)

It was initially slated to last four weeks but Chancellor Angela Merkel and the country’s 16 state governors agreed late Wednesday to extend it through Dec. 20 with a goal of pushing the number of new coronavirus cases in each region below 50 per 100,000 inhabitants per week. It’s currently at 140 per 100,000.

Merkel said that while existing measures have succeeded in halting an surge in new coronavirus infections, they have stabilized at a high level. 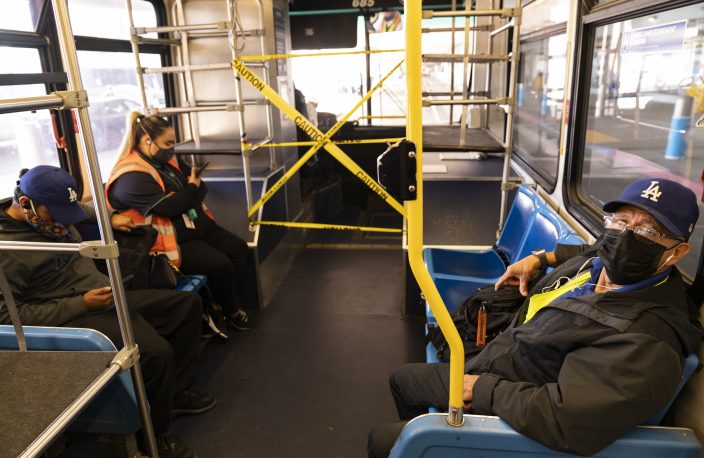 Airport workers take a shuttle bus between terminals at Los Angeles International Airport in Los Angeles, Wednesday, Nov. 25, 2020. Residents were urged to avoid nonessential travel during what is typically the busiest travel period of the year. Anyone entering California was advised to quarantine for two weeks. (AP PhotoDamian Dovarganes) 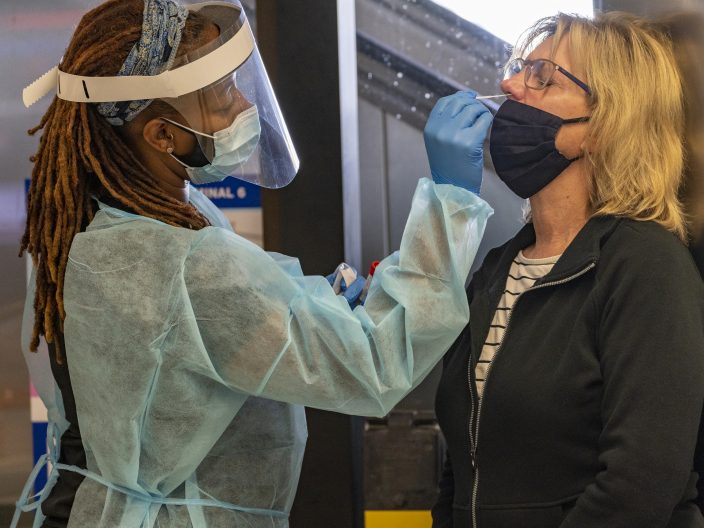 Traveler Patty Siegel, right, from Los Angeles gets a COVID-19 nasal swab test before a planned trip to Hawaii at the Los Angeles International Airport in Los Angeles Wednesday, Nov. 25, 2020. Residents were urged to avoid nonessential travel during what is typically the busiest travel period of the year. Anyone entering California was advised to quarantine for two weeks. (AP PhotoDamian Dovarganes)

— To avoid any traces of the coronavirus that might be lurking on surfaces, Americans have been wiping down groceries, wearing surgical gloves in public and leaving mail packages out for an extra day or two. But experts say the national fixation on scrubbing can sometimes be overkill.

— California has reported a record number of coronavirus cases on the eve of Thanksgiving. More than 18,000 COVID-19 infections were reported Wednesday.

— Though the first real snow has yet to fall across much of Europe, ski buffs are imagining with dread a bizarre scene: Skiing in Zermatt in Switzerland while lifts idle across the border in Italy’s Aosta valley.

SEOUL, South Korea — South Korea has recorded more than 500 new coronavirus cases in 24 hours for the first time in about eight months as health authorities struggle to contain a fresh surge of infections.

The Asian nation has been experiencing a spike in cases since it relaxed stringent social distancing rules last month. To deal with the latest surge, the country on Tuesday re-imposed tough distancing guidelines in Seoul and some other areas.

South Korea’s cases initially peaked last February and March, with officials reporting hundreds of fresh cases daily, mostly tied to a religious sect. Another major outbreak came during the summer, and was mostly tied to the greater Seoul area.

Officials say the latest bout is worrisome because there are many cluster infections tied to a variety of sources.

The cluster has been centered on Manzhouli, a city of more than 200,000 people on the border with Russia. Authorities ordered testing of all residents to detect new cases after the country’s latest local outbreak first emerged late last week. Ground transport to and from the city has been largely cut off and movement around the city restricted.

Elsewhere in China, local infections have also been reported lately in the financial hub of Shanghai and the northern port of Tianjin, although the government’s pandemic update Thursday listed no new cases in those cities.

KANSAS CITY, Mo. — Missouri’s two largest metropolitan areas are cracking down on restaurants that violate rules designed to stem the spread of the coronavirus.

Kansas City’s authorities found two dozen bars and restaurants in violation of the city’s new pandemic restrictions after a weekend sweep of 185 establishments. Previously, the city relied primarily on complaints to enforce the rules.

The new rules limit bars and restaurants to 50% capacity and require closing by 10 p.m..

ANCHORAGE, Alaska -- Officials in Anchorage, Alaska, are imposing new pandemic restrictions for December that will prohibit bars and restaurants from offering indoor service, require employers to allow people to work from home if possible and limit many businesses to 25% capacity.

Acting Mayor Austin Quinn-Davidson said Wednesday that the rules are needed to deal with increasing coronavirus infections in Anchorage, which is Alaska’s biggest city. The rules take effect Tuesday and run through Jan. 1.

NEW YORK — A new government report says the U.S. is still missing nearly eight coronavirus infections for every one counted.

By the end of September, the Centers for Disease Control and Prevention calculates that as many as 53 million Americans had been infected. That is just under eight times the confirmed cases reported at the time.

Previously, the CDC estimated that one of every 10 infections were being missed.

The latest CDC calculation is meant to give a more accurate picture of how many people actually have caught the virus since the pandemic began. Of the 53 million estimated infections, the CDC says about 45 million were sick at some point and about 2.4 million were hospitalized.

SALEM, Oregon — Oregon’s governor says bars and restaurants can reopen for limited outdoor service next week but many restrictions will remain in place until a vaccine against the coronavirus is widely available.

In making the announcement Wednesday, Gov. Kate Brown urged Oregonians to stay safe during the Thanksgiving holiday and protect others by not ignoring safety protocols, like wearing masks and limiting personal contacts.

The revamped pandemic restrictions take effect when the current two-week “freeze” expires Dec. 3. Currently, only take-out restaurant service is allowed. The restaurant industry pushed hard against the restrictions as several eateries closed for good and others were at risk of doing so.

CHEYENNE, Wyo. — Wyoming Gov. Mark Gordon says he has tested positive for the coronavirus, but has only minor symptoms.

Gordon said Wednesday that he plans to continue working remotely.

The Centers for Disease Control and Prevention recommends people who test positive for the virus isolate themselves for 10 days.

OKLAHOMA CITY — The Oklahoma State Department of Health announced Wednesday that public schools will be allowed to offer in-school quarantines for students exposed to the virus.

Schools in Mustang became the first in the state to adopt the policy, the department said.

Effective from Nov. 30 through Dec. 23, the policy would allow students to quarantine in school.

Interim State Epidemiologist Dr. Jared Taylor said students who tested positive for COVID-19 and students who had interactions with the infected student would have previously moved to distance learning for 14 days.

Under the new policy, students who are quarantined will be allowed to go to school to take part in virtual classes, but will be kept out of individual classrooms in buildings such as gyms or an auditorium where they would be socially distanced and must wear masks.

SAN JOSE, Calif. — Officials in Santa Clara County said they will ramp up enforcement of state health orders during the holiday weekend to make sure businesses follow the permitted capacity, employees and customers wear masks at all times and social distance guidelines are being followed.

With Thanksgiving week kicking off the holiday shopping season, compliance officers will fan out throughout the Silicon Valley county starting Thursday and at least through Sunday with the help of firefighters who normally enforce capacity issues for fire codes. They will be able to issue fines on the spot starting at $250.

Until now, most California counties have taken an education approach, issuing warnings instead of fines.

But the county recorded its highest individual new case count for a day and has only 68 available ICU beds, testing officer Dr. Marty Fenstersheib said Wednesday, surpassing any levels hit during the peak of the summer surge.

“We are really, really concerned,” Fenstersheib said. “All of the metrics that we have been following, that have done well in previous months, are now going up very steeply.”

An increased number of hospitalizations across the state has prompted doctors and public health officials to advise against attending Thanksgiving gatherings with people outside their immediate households.

On Wednesday, an infectious disease specialist said COVID-19 cases could further overwhelm a strained healthcare system if people do not follow this guidance. His pleas comes just days after Republican Gov. Gary Herbert said he would not extend his previous order requiring people to limit social gatherings to people in their home.

In Utah, 1 in 136 people were diagnosed with COVID-19 over the past week and the state is ranked tenth in the country for new cases per capita, according to data from Johns Hopkins.

There have been over 182,000 reported virus cases in Utah and more than 800 known deaths related to the virus, according to state data.

The Tampa Bay Buccaneers have a ch ...