A Cambodian court on Thursday began hearing the cases of nearly 130 government critics and opponents charged with treason for taking part in nonviolent political activities over the past three years, in what one of them called a sham trial.

Only 33 defendants attended Thursday's session at the Phnom Penh Municipal Court, with some believed to be overseas. Most are former members or supporters of the disbanded Cambodia National Rescue Party.

As the sole opposition party in Parliament, it had been expected to present a strong challenge to Prime Minister Hun Sen’s ruling Cambodian People’s Party in the 2018 general election. But in late 2017, Hun Sen launched a sweeping crackdown on his opponents and the CNRP was forced by the high court to disband and its lawmakers removed from Parliament. Many people believe the court acted to ensure that Hun Sen’s party won by sweeping all the seats. 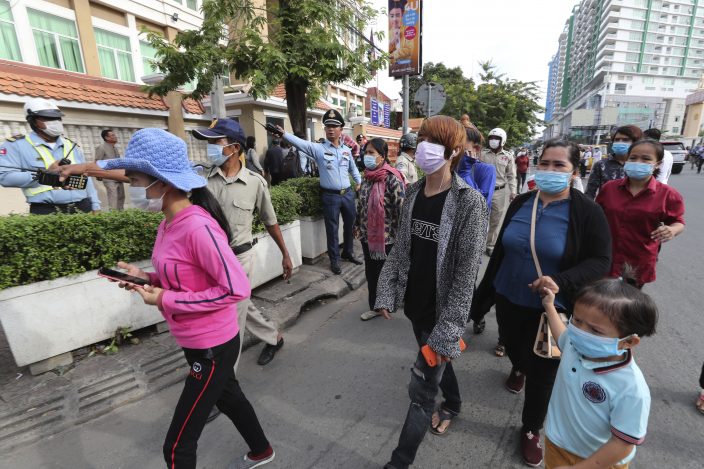 Cambodian court security personnel direct relatives who were called on to attend a trial as they arrive at Phnom Penh Municipal Court, in Phnom Penh, Cambodia, Thursday, Nov. 26, 2020. A Cambodian court on Thursday began hearing the cases of nearly 130 opponents and government critics charged with treason for taking part in nonviolent political activities over the past three years, in what one of them described as a sham trial. (AP PhotoHeng Sinith)

Virtually all of the defendants have been charged with conspiracy to commit treason and incitement to commit a felony, which together carry a maximum penalty of 12 years in prison, according to defense lawyers and human rights activists.

It was not immediately clear why only 33 defendants attended Thursday’s court session. An unknown number are believed to be living abroad, including senior politicians and Cambodian laborers in neighboring countries, said Ny Sokha of the local rights group ADHOC. Cambodian law allows trials in absentia.

Judge Ros Piseth agreed to split the defendants into two groups to make the proceedings easier, with the first group having its initial hearing on Jan. 14 and the other on March 4. 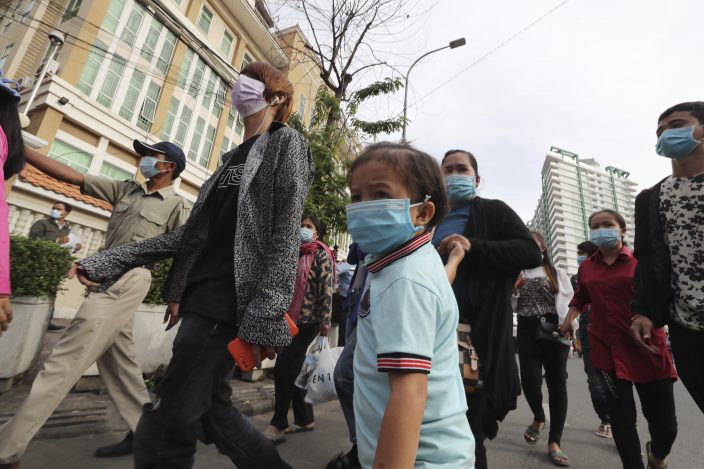 Relatives who were called on to attend a trial arrive at Phnom Penh Municipal Court, in Phnom Penh, Cambodia, Thursday, Nov. 26, 2020. A Cambodian court on Thursday began hearing the cases of nearly 130 opponents and government critics charged with treason for taking part in nonviolent political activities over the past three years, in what one of them described as a sham trial. (AP PhotoHeng Sinith)

The judge said he was adjourning the trial for now so that defendants who did not yet have lawyers and declined court-appointed ones could find representation.

Sam Sokong, one of the defense lawyers, said earlier this week that he feared his clients could not get a fair judgment because there are so many being tried at the same time.

“I am very doubtful about this arrangement and whether fairness will be received by my clients according to the international standard,” he said.

One of the best-known defendants living in Cambodia is Theary Seng, a Cambodian-American lawyer who has long been one of the most outspoken critics of Hun Sen and his government.

“I feel at peace, because I’ve done nothing wrong. This is not a courtroom. This is a political theater, it’s a political circus,” she told reporters outside the courtroom.

She described the trial as a sham scripted by Hun Sen’s regime. “It’s only a way to block the view of the international community of the real serious issues of human rights violations, of political repression,” she said.

Am Sam Ath, who works with the Cambodian human rights group Licadho, said that according to court summonses, between 126 and 129 people have been ordered to appear. He said many defendants are accused of being involved with organizing a failed trip home by former opposition leader Sam Rainsy from exile last November.

Sam Rainsy, the co-founder of the Cambodia National Rescue Party, has been in exile since 2016 to avoid serving prison sentences on defamation and other charges. He says the cases against him are politically motivated, and his attempted return last year was blocked by the government.

Hun Sen has been in power for 35 years and has often been accused of heading an authoritarian regime. Several Western nations have imposed sanctions on his government, mainly after concluding that the 2018 election was neither free nor fair. The harshest measure came from the European Union, which this year withdrew some preferential trading privileges.

On Wednesday, the U.N. human rights expert on Cambodia expressed serious concerns about the trial.

“This is not an isolated episode,” she said in a statement. “Civic and democratic space in Cambodia has continued to shrink and there remains little evidence of political rapprochement and reconciliation.”

Marlboro sales fueled an uptick in ...