Monday seemed like the end of President Donald Trump's relentless challenges to the election, after the federal government acknowledged President-elect Joe Biden was the “apparent winner” and Trump cleared the way for cooperation on a transition of power.

By Wednesday, Trump was phoning into a local Pennsylvania Republican lawmakers' meeting that had been orchestrated by his campaign to assert falsely, again, that the election was tainted. 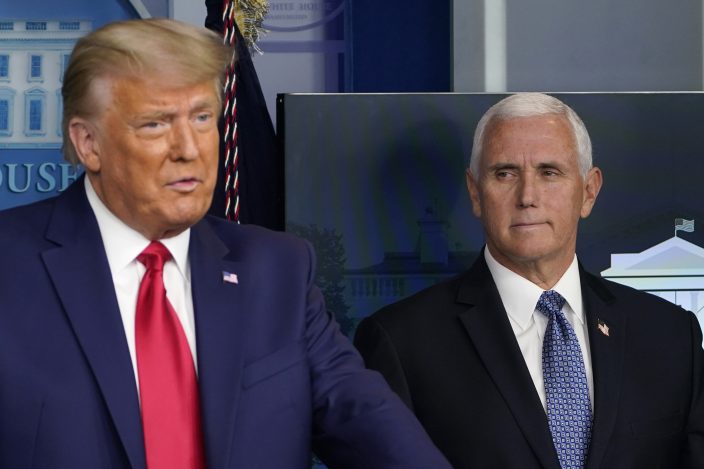 “This election was rigged and we can’t let that happen," Trump said by phone, offering no specific evidence.

The 2020 presidential race is turning into the zombie election that Trump just won’t let die. Despite dozens of legal and procedural setbacks, his campaign keeps filing new challenges that have no hope of succeeding and making fresh, unfounded claims of fraud.

But that’s the point. Trump’s strategy wasn’t to change the outcome, but to create a host of phantom claims about the 2020 presidential race that would infect the nation with doubt, even though the winner was clear and there has been no evidence of mass voter fraud. 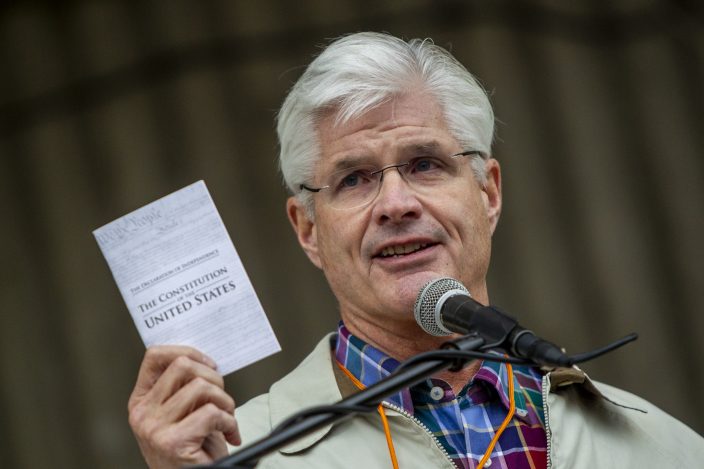 “Zombies are dead people walking along the living — this litigation is the same thing,” said Franita Tolson, a professor at the University of Southern California Gould School of Law. “In terms of litigation that could change the election, all these cases are basically dead men walking.”

It's a strategy tolerated by many Republicans, most notably Senate Majority Leader Mitch McConnell of Kentucky, who are clinging to Trump as they face a test of retaining their own power in the form of two runoff elections in Georgia in January.

“This really is our version of a polite coup d’etat,” said Thomas Mann, senior resident scholar at the Institute of Governmental Studies at the University of California at Berkeley. “It could end quickly if the Republican Party acknowledged what was going on. But they cower in the face of Trump’s connection with the base.” 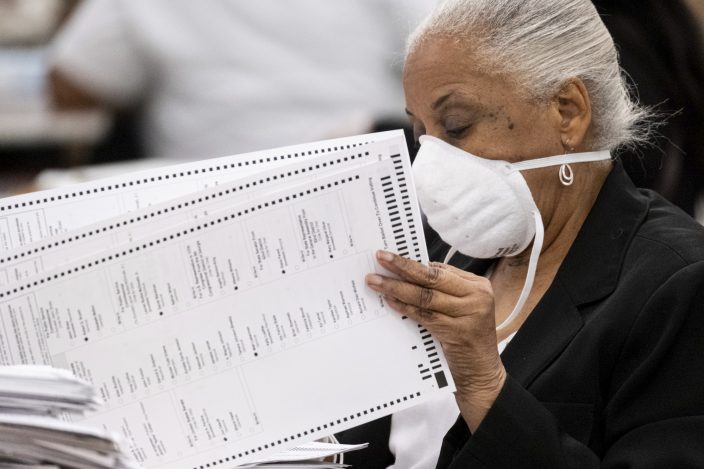 Workers sort and stack ballots in preparation for scanning during a recount, Tuesday, Nov. 24, 2020, in Lithonia, Ga. County election workers across Georgia have begun an official machine recount of the roughly 5 million votes cast in the presidential race in the state. The recount was requested by President Donald Trump after certified results showed him losing the state to Democrat Joe Biden by 12,670 votes, or 0.25% (AP PhotoBen Gray)

A day after Trump said his administration should begin working with Biden's team, three more lawsuits were filed by allies attempting to stop the certification in two more battleground states. In Michigan, a judge did not rule on the suit and the state certified the results for Biden. Another was filed in Wisconsin, which doesn't certify until Tuesday. Arizona Republicans filed a complaint over ballot inspection; the state certification is due Monday.

In Pennsylvania, where state Republican lawmakers met at Gettysburg on Wednesday to air grievances about the election, Trump lawyer Rudy Giuliani attended in person and Trump dialed in from the Oval Office. 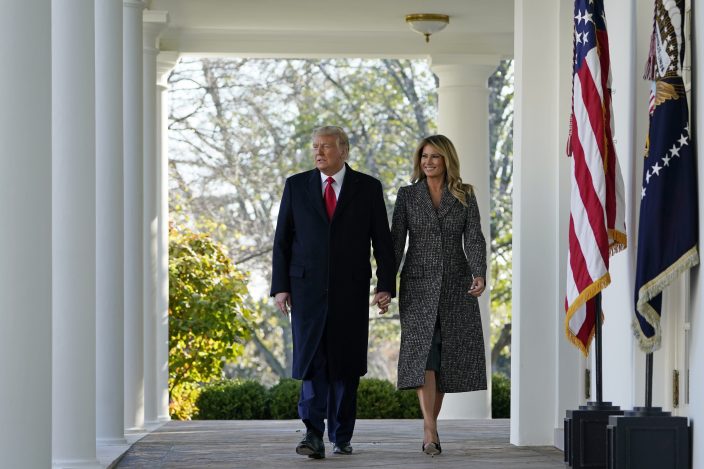 President Donald Trump and first lady Melania Trump walk out of the Oval Office and towards the Rose Garden of the White House, Tuesday, Nov. 24, 2020, in Washington, to pardon Corn, the national Thanksgiving turkey. (AP PhotoSusan Walsh)

“We have all the evidence," Trump asserted. “All we need is to have some judge listen to it properly without having a political opinion.”

But the strongest legal rebuke yet came from a conservative Republican judge in federal court in Pennsylvania, who on Saturday dismissed the Trump team's lawsuit seeking to throw out the results of the election. The judge admonished the Trump campaign in a scathing ruling about its lack of evidence. The campaign has appealed.

Trump's allies have privately acknowledged their plan would never actually overturn the results, but rather might provide Trump an off-ramp for a loss he wasn't owning up to and an avenue to keep his base loyal for whatever he does next. 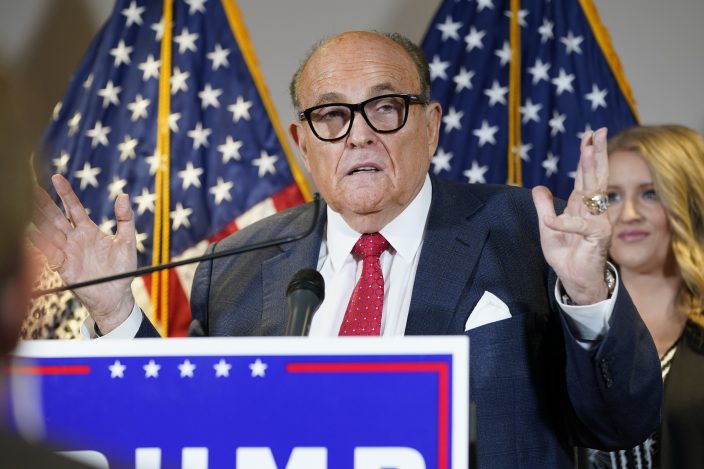 “And then our governing and politics will be hellish, because he will continue doing what he’s doing from his private own perch,” Mann predicted.

Emily Murphy, the top official at the General Services Administration, declared Biden the “apparent winner” Monday, a procedural yet critical step that allowed for the transition to begin in earnest. She made the determination after Trump's efforts to subvert the vote failed across battleground states. She cited “recent developments involving legal challenges and certifications of election results.”

Michigan certified Biden’s 154,000-count victory Monday, despite calls by Trump to the GOP members to block the vote to allow for an audit of ballots in Wayne County, where Trump claimed he was the victim of fraud. Biden crushed the president by more than 330,000 votes there. 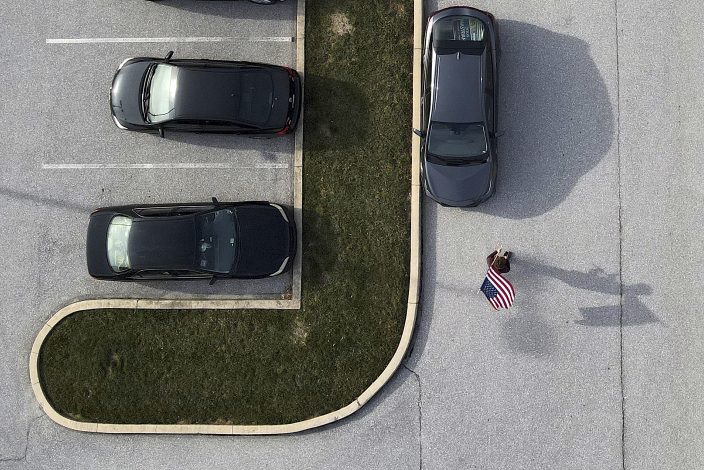 A person walks with a U.S. flag outside the Wyndham Hotel, where Rudy Giuliani, an attorney for the president, is speaking at a hearing of the Pennsylvania State Senate Majority Policy Committee, Wednesday, Nov. 25, 2020, in Gettysburg, Pa. (AP PhotoJulio Cortez)

“The board’s duty today is very clear,” said Aaron Van Langevelde, the Republican vice chair. “We have a duty to certify this election based on these returns.”

Still, the Trump legal team dismissed the certification as “simply a procedural step” and insisted it would fight on.

It has brought at least four cases in Michigan that sought — unsuccessfully — to block certification of election results in part or all of the state. 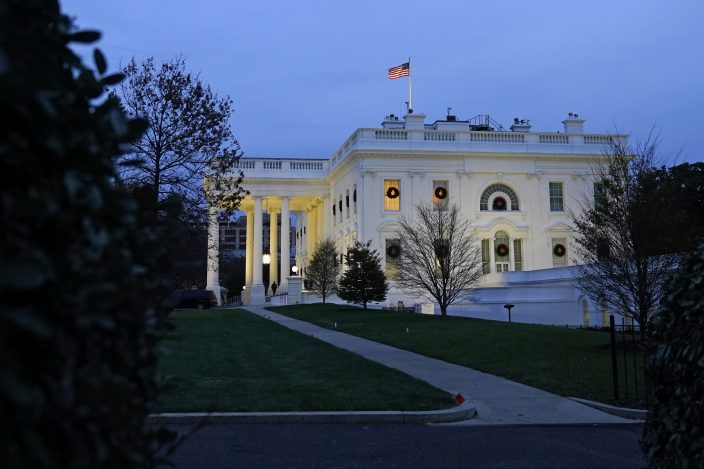 In Pennsylvania, after Gov. Tom Wolf certified Biden as the winner, an appeals court judge ordered state officials to halt any further steps toward certifying election results. The state has appealed to Pennsylvania's Supreme Court.

In Arizona, just as lawyers for a woman in the Phoenix area dropped a case alleging that equipment was unable to record her ballot because she completed it with a county-issued Sharpie pen, Trump’s campaign filed its own lawsuit echoing some of the same complaints. As that suit was about to be dismissed, lawyers for the woman filed a new case reviving the claims and demanding that she be allowed to recast her ballot. All three of the cases have now been dismissed.

“The legal process seems to be unfolding the way it’s supposed to, but the Trump campaign has made clear its desire to throw wrenches in the system wherever it can,” said Lisa Marshall Manheim, a professor at the University of Washington School of Law. 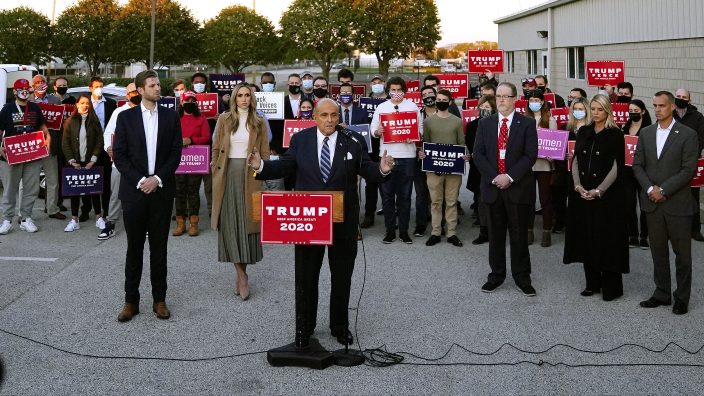 $640 million Powerball drawing up next as big jackpots ...

Trump to appeal to Nevada voters from neighboring Arizona