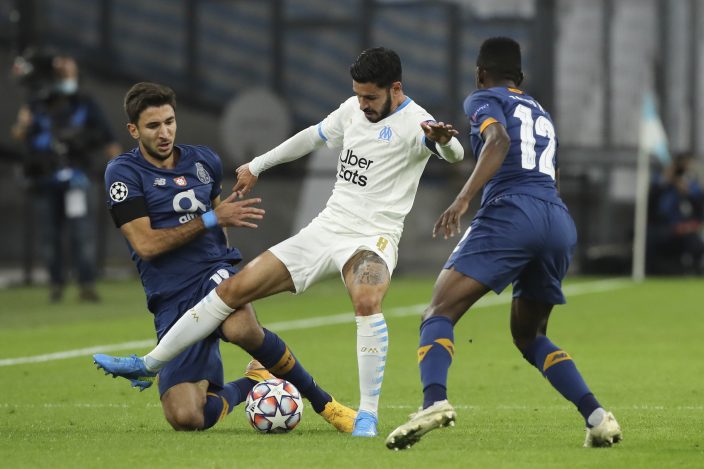 VENEZUELA-JAILED AMERICAN OIL EXECUTIVES — U.S. oil executive Tomeu Vadell breaks his silence after being jailed along with five other executives from Citgo in Venezuela for nearly three years. In a letter provided to The Associated Press, the father and businessman pleads for his freedom and shares the pain he feels over being separated from his family over the holidays. By Scott Smith. UPCOMING: 1,260 words, photos. 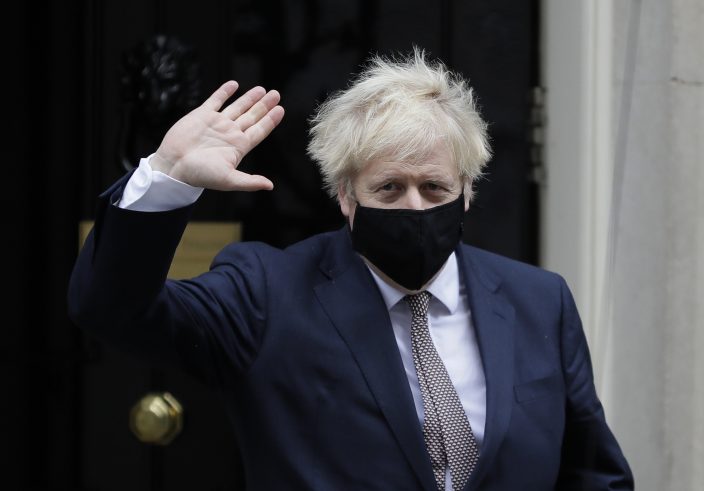 VIRUS OUTBREAK-THANKSGIVING — Americans are marking the Thanksgiving holiday amid an unrelenting pandemic that has upended traditions at dinner tables all around the country. Zoom and FaceTime calls are fixtures this year, and people who have lost family members to the virus are keeping an empty seat to honor their loved ones. Far fewer volunteers will help at soup kitchens or community centers.. By Regina Garcia Cano, Matt Sedensky and Heather Hollingsworth. SENT: 1170 words photos.

ZOMBIE ELECTION — The 2020 presidential race is turning into the zombie election. Just about everyone knows it’s over and done. But President Donald Trump won’t let it die. His campaign keeps filing new challenges that have no hope of succeeding. But that's the point Trump’s strategy was to create a host of walking-dead claims about the 2020 presidential race that would infect the nation with doubt, even though the winner was clear and there has been no evidence of mass voter fraud. By Colleen Long, Alanna Durkin Richer and Zeke Miller. SENT: 968 words, photos. 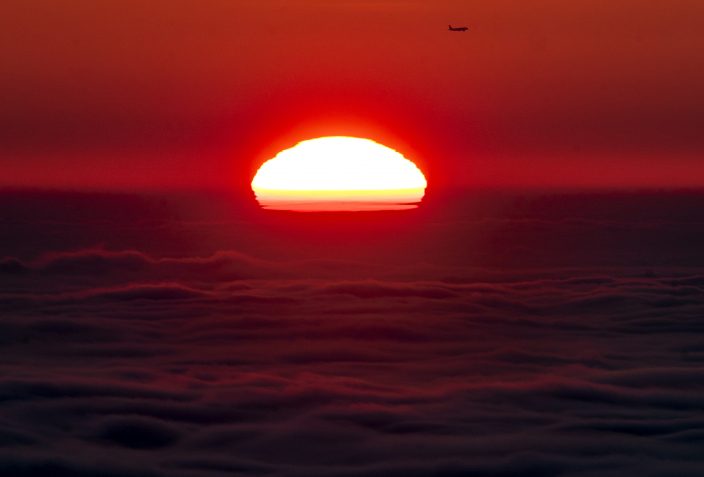 An aircraft passes by as the sun rises through the thick fog over Frankfurt, Germany, Thursday, Nov. 26, 2020. (AP PhotoMichael Probst)

ETHIOPIA-MILITARY-CONFRONTATION — Ethiopia’s prime minister says the army has been ordered to move on the embattled Tigray regional capital after his 72-hour ultimatum ended for Tigray leaders to surrender, and he warned its half-million residents to stay indoors and disarm. By Cara Anna. SENT: 620 words photos.

MARADONA-FUNERAL — Tens of thousands of fans, many weeping but eager to honor Diego Maradona, filed past the coffin of Argentina’s most iconic soccer star. Visitation was interrupted after 2 p.m. on Thursday after dozens of people confronted police for the second time in the day near the country’s presidential mansion. Maradona’s wooden casket was in a place of honor in the main lobby of the Casa Rosada, covered in an Argentine flag and a No. 10 shirt he famously wore for the national team. By Almudena Calatrava and Debora Rey. 760 words, photos. WITH MARADONA-REMEMBRANCE — From the press tribune above the Estadio Azteca field it was impossible to discern the trickery Diego Maradona had performed in the 1986 World Cup quarterfinal against England; MARADONA-NAPOLI MOURNS — Naples’ mayor has started the formal process to rename the San Paolo stadium for Diego Maradona. By Andrew Dampf SENT: 619 words, photos. 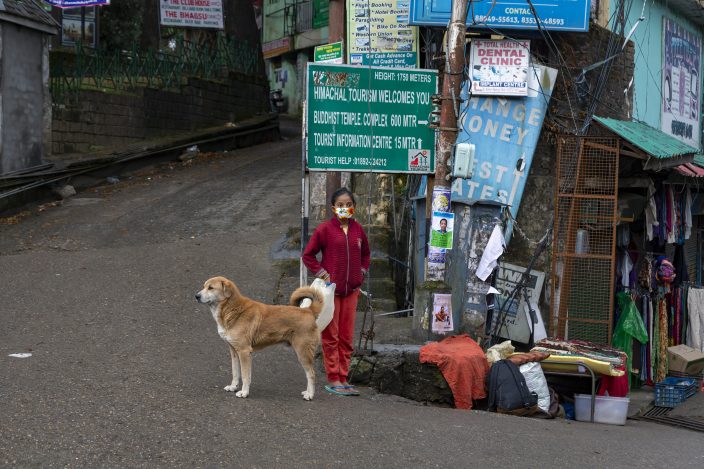 A girl wearing a face mask as protection against the coronavirus stands next to a dog in Dharmsala, India, Thursday, Nov. 26, 2020. India has more than 9 million cases of coronavirus, second behind the United States. (AP PhotoAshwini Bhatia) 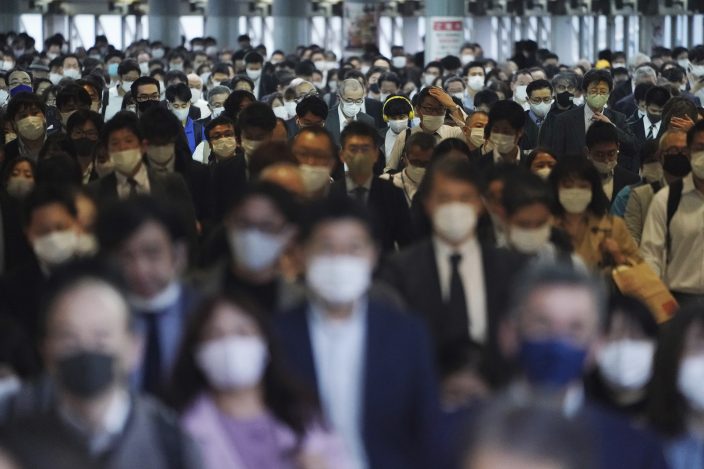 A station passageway is crowded with commuters wearing face masks to help curb the spread of the coronavirus during a rush hour in Tokyo Friday, Nov. 20, 2020. (AP PhotoEugene Hoshiko)

SOUTH KOREA-CHATROOM SEX CRIME — The operator of an online chat room in South Korea was sentenced Thursday to 40 years in prison for blackmailing women, including minors, into filming sexually explicit video and selling them to others. SENT: 280 words. 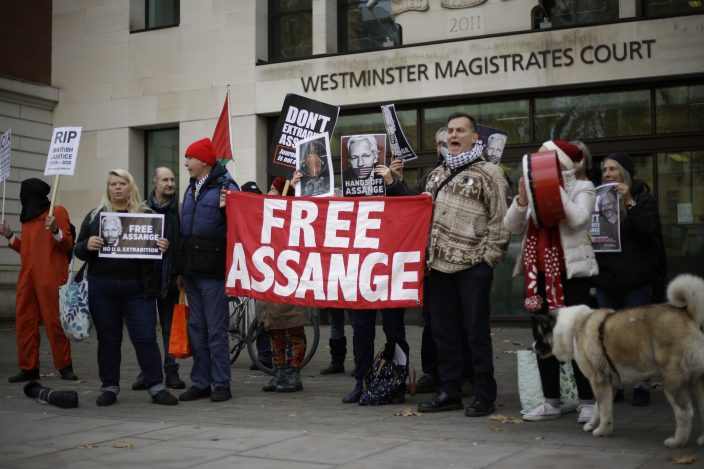 Supporters of WikiLeaks founder Julian Assange take part in a protest outside Westminster Magistrates Court in London, to support him in a administrative hearing for his extradition case, Thursday, Nov. 26, 2020. Assange was unable to attend or appear by video link today due to a COVID-19 outbreak at Belmarsh prison where he is being held. (AP PhotoMatt Dunham)

VIRUS OUTBREAK-BRITAIN — Most people in England will continue to face tight restrictions on socializing and business after a nationwide lockdown ends next week, with pubs and restaurants ordered to remain shut in areas that are home to more than 20 million people. SENT: 640 words, photos. 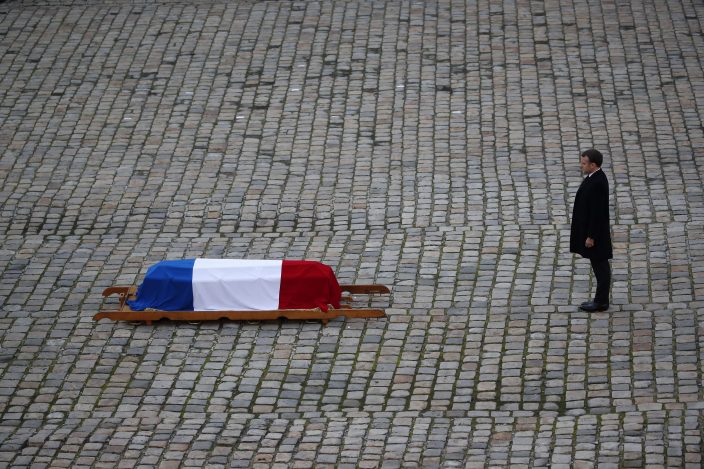 French President Emmanuel Macron pays his respects by the coffin of WWII fighter and "Compagnon de la Liberation" Daniel Cordier during a ceremony, in the courtyard of the Invalides monument in Paris Thursday, Nov. 26, 2020. (AP PhotoFrancois Mori)

VIRUS-OUTBREAK-AFRICA — Vaccinations against COVID-19 in Africa might not start until the second quarter of next year, the continent’s top public health official says, adding that it will be “extremely dangerous” if more developed parts of the world vaccinate themselves and then restrict travel to people with proof of a vaccination. SENT: 270 words, photos.

VIRUS OUTBREAK-VACCINE-Q&A — AstraZeneca and Oxford University have acknowledged a manufacturing error that is raising questions about preliminary results of their experimental COVID-19 vaccine. SENT: 720 words.

VIRUS-OUTBREAK-GERMANY — Chancellor Angela Merkel urges Germans to remain patient with restrictions meant to slow the spread of the coronavirus, saying that with promising vaccines on the way, “there is light at the end of the tunnel.” SENT: 460 words, photos. 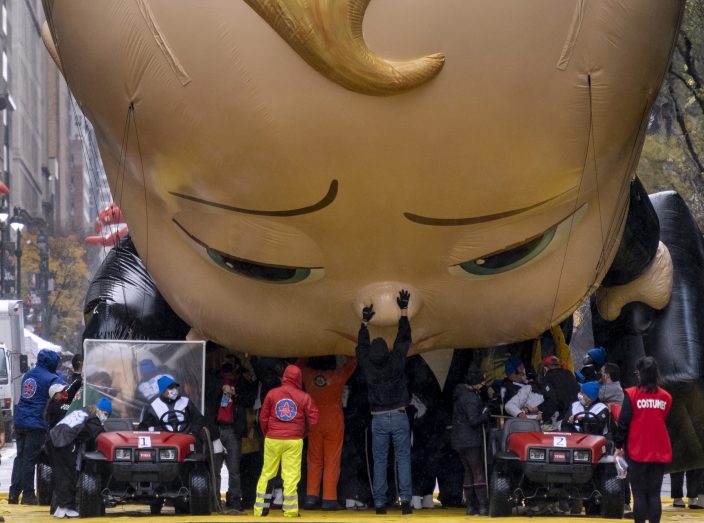 The Boss Baby balloon is deflated as it ends its appearance during the modified Macy's Thanksgiving Day Parade in New York, Thursday, Nov. 26, 2020. The annual parade goes on but only after great changes as compared to previous years due to the current deadly pandemic. (AP PhotoCraig Ruttle)

VIRUS OUTBREAK-GREECE-STRIKE — Greece’s government has announced a weeklong extension to the country’s current lockdown to curb continued spread of the coronavirus, particularly in the country's north. The lockdown was due to end on Nov. 30 but will be extended to Dec. 7. The announcement came amid a 24-hour government workers' strike. SENT: 540 words, photos.

VIRUS OUTBREAK-DENMARK-MINK — Some of the thousands of mink culled in Denmark to minimize the risk of them re-transmitting the coronavirus to humans, have risen from their shallow graves because gases have built up in the decaying bodies. SENT: 490 words, photos.

IMMIGRANT CHILDREN — The U.S. government has appealed a judge’s order barring the expulsions of immigrant children who crossed the border alone, a policy enacted during the coronavirus pandemic to deny the children asylum protections. SENT: 420 words.

IRAN-AUSTRALIA — Thai officials say they approved the transfer back to Tehran of three Iranians who were involved in a botched 2012 bomb plot, as Iran released a 33-year-old Australian academic who was imprisoned for more than two years on spying charges. SENT: 920 words, photos.

SOMALIA-US TROOP WITHDRAWAL — No country has been involved in Somalia’s future as much as the United States. Now the Trump administration is thinking of withdrawing the several hundred U.S. military troops from the Horn of Africa nation at what some experts call the worst possible time. After three decades of chaos that have ripped apart the country, it’s only in the past few years has found its footing. By Cara Anna. SENT: 1,060 words, photos.

TURKEY-FAILED COUP — A Turkish court has sentenced hundreds of military and civilian personnel at an air base to life prison sentences, proclaiming them guilty of involvement in a failed coup attempt in 2016. The massive trial was one of two main trials against suspected members of a network led by U.S.-based cleric Fethullah Gulen. SENT: 630 words, photos.

EUROPE-MIGRANTS — Four European Union countries fear that planned reforms to the EU’s asylum system will leave them to cope with migrant inflows mostly alone. Greece, Italy, Malta and Spain say in a joint paper that mandatory quotas are needed for sharing out people who qualify for refugee status among the 27 EU countries. SENT: 650 words.

FRANCE-POLICE — A French Black man beaten up by several police officers said he is seeking justice after the publication of videos showing officers using a truncheon and tear gas against him with no apparent reason. SENT: 690 words, photos.

NEW ZEALAND-FOREIGN MINISTER-INTERVIEW — Diplomats like to remain neutral but Nanaia Mahuta let the veil slip a little when a winner was declared in the U.S. election by tweeting a smiley-face emoji. SENT: 750 words, photos.

MIGRATION-ATLAS — New maps of big game migrations in the Western U.S. will help identify where human development is getting in the way of animals on the move. SENT: 1,030 words, photos.

COLLEGE-BASKETBALL BEGINS — A college basketball season like no other kicked off with dozens of games across the country. It took a strange build-up to get to this point and it continued with the first day of games. Teams played in mostly empty arenas as the sounds of coaches yelling and squeaking sneakers echoed off the seats. SENT: 920 words, photos.

Organizers of the Boston Marathon ...