France will mourn the brutal loss of former star wing Christophe Dominici amid a cathedral-like quiet then focus on beating Italy with a makeshift side in the Autumn Nations Cup on Saturday night.

The players will wear his nickname ’Domi’ on their left sleeves beneath a giant picture of him at Stade de France, where a minute’s silence will be held.

“You don’t come across a man like him twice,” said former France captain Pascal Pape, who was close to Dominici. 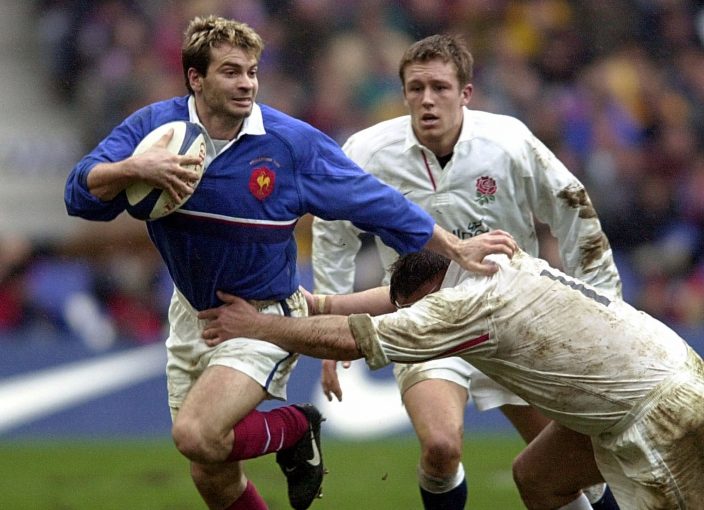 FILE - In this Feb.19, 2000 file photo, France's Christophe Dominici, left, is tackled by English Jason Leonard, right, while Jonny Wilkinson looks on, during the six nations rugby match France vs. England in Paris. Christophe Dominici, one of the most exciting wingers to play rugby for France, has died. He was 48. (AP PhotoChristophe Ena, File)

France coach Fabien Galthie has lost an old friend and teammate, too.

But he must try his best to focus on winning with a side of 13 changes after the mature 22-15 win in Scotland last weekend, including five new faces and a pack boasting barely a dozen caps.

The changes happened because of an agreement on rotating players between the French Rugby Federation and French league clubs, restricting players to three of six internationals.

“The squad has a limited experience, but that's the deal. We knew it and we'll make do with it," Galthie said. “At the level we're playing at, everyone must be ready anytime or anywhere."

Scrumhalf Baptiste Serin is among just three players with 20 caps or more, and he replaces Charles Ollivon as captain.

“It's precisely because he's so committed that we've given him this role,” Galthie said. “He wants to lead this team.”

France is second in Group B behind Scotland and needs the win to send it through to the finals weekend on Dec. 6. If so, a weakened French team could meet Six Nations champion England at Twickenham.

Italy made three changes after losing at home to Scotland 28-17 two weeks ago. Flankers Johan Meyer and Maxime Mbanda’ are in as injury replacements, and left wing Luca Sperandio, last seen nearly two years ago, was the only backline change.

History is ensured when Nigel Owens becomes the first official to referee 100 tests. The 49-year-old Welshman whistled his first test 17 years ago, and has endured through four Rugby World Cups.

Before kickoff, he and the teams will pause to remember Dominici.

He died on Tuesday at the age of 48, amid reports he either fell or jumped to his death from a derelict building, not far from where he won five French championships with Stade Francais in western Paris. The Nanterre prosecutor’s office has begun an enquiry into the death.

Dominici's death sent shockwaves through rugby and reached the benches of the French parliament, where politicians at the National Assembly stood unprompted and applauded him in tribute.

Because of the coronavirus, there will be no crowd at the 81,000-seat stadium to say goodbye to the much-liked and much-troubled Dominici, whose life was punctuated by dazzling feats of try-scoring and crushing spells of silent withdrawal, long haunted by the death of his elder sister when he was in his early teens.

His many friends in rugby included the current French hierarchy: Federation president Bernard Laporte, the former France coach with whom Dominic had a fusional and close relationship; Galthie and his assistant Raphael Ibanez, all teammates during a glory era that defined French flair in brash style. Galthie also played alongside Dominici at Stade Francais, before coaching him there.

Dominici scored 25 test tries in a glory-filled decade with the national team, highlighted by sensational upsets of New Zealand at the 1999 and 2007 Rugby World Cups.

"We've lost a friend. We're struggling, struggling to realize,” Laporte said to the squad on Wednesday. “I told them: ‘I wish you simply one thing, that you have the same career as him.’”