Antonio Gibson ran for three touchdowns, Alex Smith had a scoring pass and Washington at least temporarily moved into first place in the woeful NFC East with a 41-16 Thanksgiving victory over the Dallas Cowboys on Thursday.

Gibson's second score was a 23-yard run on the first play after an ill-advised fake punt attempt by Dallas as Washington beat its division rival on Thanksgiving for just the second time in 10 tries, the most frequent visitor for the Cowboys in their annual holiday home game.

Washington (4-7) slides ahead of Philadelphia (3-6-1) in the NFC East and will stay in first place if the Eagles lose to Seattle on Monday night. It was the third win in five games since a five-game losing streak dropped Washington to 1-5. 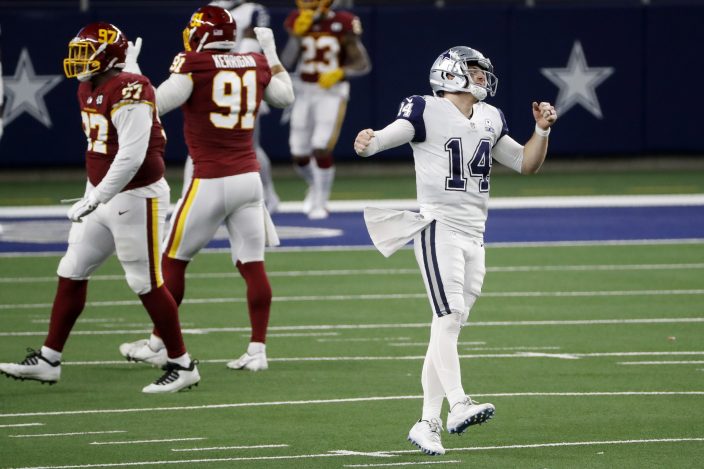 Dallas Cowboys quarterback Andy Dalton (14) gestures after throwing an incomplete pass into the end zone as Washington Football Team's Tim Settle (97) and Ryan Kerrigan (91) walk past in the second half of an NFL football game in Arlington, Texas, Thursday, Nov. 26, 2020. (AP PhotoRoger Steinman)

Dallas (3-8) couldn't build on a big win at Minnesota, losing for the fifth time in six games since star quarterback Dak Prescott's season-ending ankle injury. The Cowboys were playing a day after strength coach Markus Paul died at a hospital following a medical emergency at the team's facility.

The Cowboys trailed 20-16 when they faced a fourth-and-10 from their 24-yard line early in the fourth quarter. Darian Thompson took the snap in front of punter Hunter Niswander and pitched to Cedrick Wilson on a reverse that was stuffed for a 1-yard loss.

On the next play, Gibson easily beat the Dallas defense to the left pylon. After another Dallas punt, Gibson capped a clock-killing drive with a 37-yard score for a 34-16 lead. 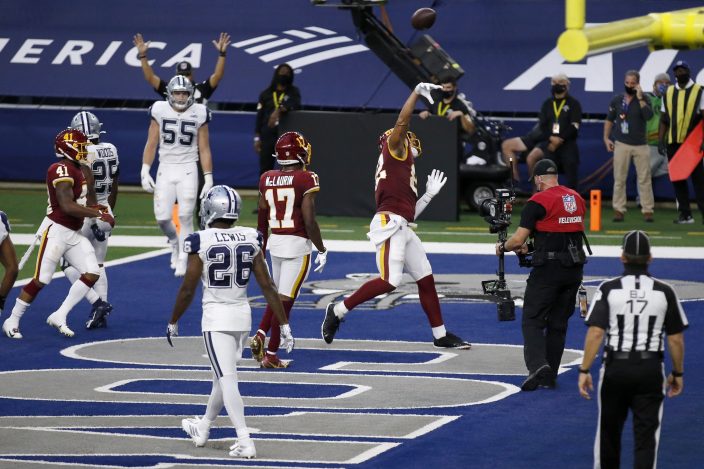 Dallas Cowboys' Jourdan Lewis (26), Leighton Vander Esch (55) and others look on as Washington Football Team tight end Logan Thomas (82) throws the ball into the seats after scoring a touchdown in the first half of an NFL football game in Arlington, Texas, Thursday, Nov. 26, 2020. (AP PhotoRoger Steinman)

Washington made it a blowout when Montez Sweat tipped and intercepted a pass right in the face of Andy Dalton and was free to run 15 yards for a TD.

Gibson, who already was the rookie leader in touchdowns rushing and now has 11, finished with 115 yards on 20 carries.

And two-time rushing champion Ezekiel Elliott of Dallas had just 32 yards while losing his fifth fumble of the season, by far the most of his five-year career. 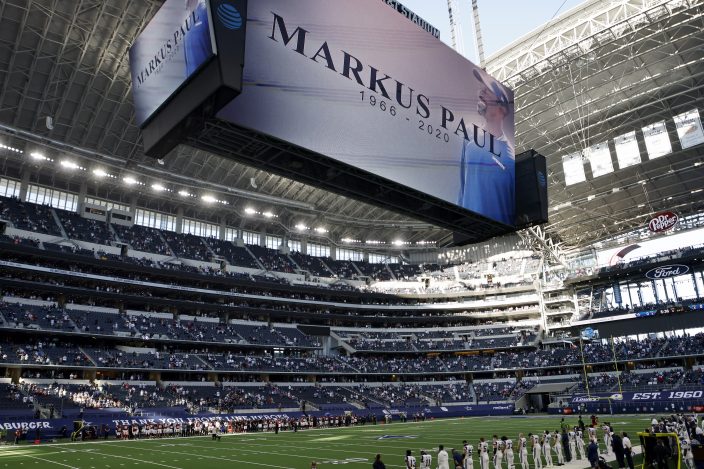 An image of Dallas Cowboys strength and conditioning coordinator Markus Paul is projected on the video screen as all in attendance observe a moment of silence before an NFL football game against the Washington Football Team in Arlington, Texas, Thursday, Nov. 26, 2020. Paul died on Wednesday. (AP PhotoRon Jenkins)

Smith's touchdown pass was a 5-yarder to tight end Logan Thomas, who chunked the ball into the second deck of seats not long after his 28-yard pass to receiver Terry McLaurin on a trick play set up Gibson's first TD.

McLaurin had the defensive play of the game, running down Dallas linebacker Jaylon Smith after an interception and tackling him at the Washington 4. With a chance at the tying touchdown, the Cowboys went 6 yards the wrong direction and had to settle for a short field goal.

Dallas’ last lead was 10-7 in the second quarter after Dalton’s 54-yard touchdown pass to Amari Cooper, who had 112 yards on six catches.

A Dallas offensive line that has been in flux all season lost both starting tackles to injuries on the opening drive, which ended in a field goal. And that's with the original starting tackles already out for the season with injuries.

Washington: at Pittsburgh on Dec. 6.

Cowboys: at Baltimore next Thursday.