For years, these elite NFL coaches have praised the performances of Tom Brady, Mr. Six Rings. And they do the same now with Patrick Mahomes, the NFL's biggest playmaker.

On Sunday, in a matchup that fits prime time but wasn't one CBS was about to let get away from its afternoon lineup, Mahomes and the Chiefs visit Brady and Tampa Bay. 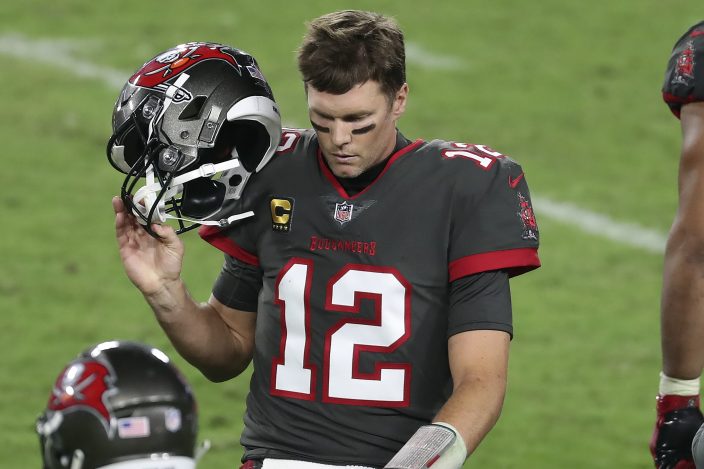 They come into the showdown on different paths. Mahomes was heroic — again — in bringing Kansas City (9-1) back at Las Vegas, avenging its only defeat this season.

Buccaneers coach Bruce Arians, who also knows a few things about quarterbacks, has called Mahomes' college workout at Texas Tech "amazing." A good word for Mahomes in the pros, too.

“The day I worked out Patrick, I think the wind was blowing about 35-40 miles per hour and it didn’t affect his ball at all,” he says. "It was amazing down in Lubbock that day.” 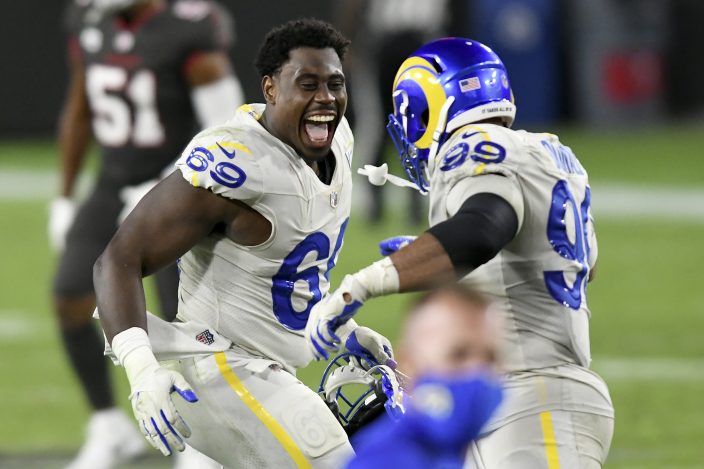 Arians, whose Bucs (7-4) have a bye next week (at last), saw his team and Brady struggle in a loss to the Rams on Monday night. 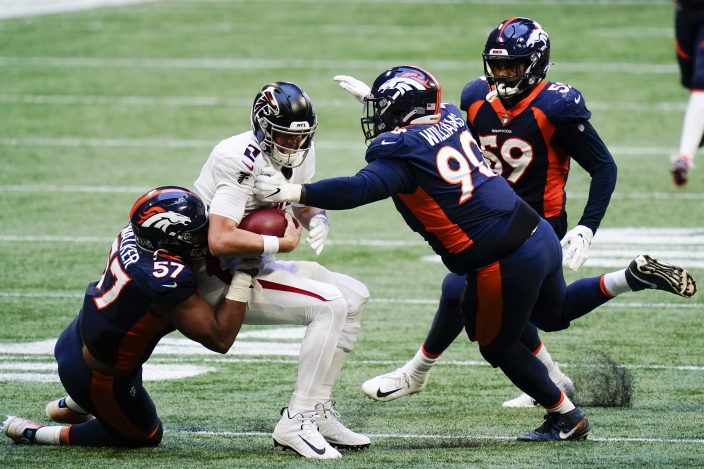 Texans 41, Lions 25: Deshaun Watson had a pair of go-ahead touchdown passes in the first half and threw for two more scores in the fourth quarter to help Houston pull away and beat host Detroit on Thursday.

Texans star defensive end J.J. Watt had an early pick-6 and Will Fuller had six receptions for 171 yards and two touchdowns for the Texans (4-7), who have won two straight for the first time this season and three of their past four games with interim coach Romeo Crennel.

Detroit (4-7), which entered the game coming off a 20-0 loss at Carolina, scored first before collapsing with turnovers on two straight snaps and three consecutive possessions in the first half against a defense that entered the game with an NFL-low five forced turnovers.

Watson finished 17 of 25 for 318 yards with four touchdowns and no interceptions. He has thrown 15 touchdown passes without getting picked off once in the past six games.

Washington 41, Cowboys 16: Antonio Gibson ran for three touchdowns, Alex Smith had a scoring pass and Washington at least temporarily moved into first place in the woeful NFC East with a Thanksgiving victory over host Dallas on Thursday.

Gibson’s second score was a 23-yard run on the first play after an ill-advised fake punt attempt by Dallas as Washington beat its division rival on Thanksgiving for just the second time in 10 tries, the most frequent visitor for the Cowboys in their annual holiday home game.

Washington (4-7) slides ahead of Philadelphia (3-6-1) in the NFC East and will stay in first place if the Eagles lose to Seattle on Monday night. It was the third win in five games since a five-game losing streak dropped Washington to 1-5.

Dallas (3-8) couldn’t build on a big win at Minnesota, losing for the fifth time in six games since star quarterback Dak Prescott’s season-ending ankle injury. The Cowboys were playing a day after strength coach Markus Paul died at a hospital following a medical emergency at the team’s facility.

One of the NFL's best and most physical rivalries, but the Ravens are struggling and lost their past two games, while, clearly, the Steelers are surging.

The Steelers are the 17th team since 1970 to start a season 10-0. Their 10-game winning streak is the second-longest single-season string in franchise history: The 1975 team won 11 straight on its way to the team’s second straight Super Bowl title. The Steelers can clinch a playoff berth with a win and losses by the Raiders and the Dolphins.

This game was moved from Thursday night because of the Ravens' coronavirus issues. Baltimore will be without running backs J.K. Dobbins and Mark Ingram, along with defensive tackle Brandon Williams, all of whom are on reserve/COVID-19 list.

Both of these AFC South leaders won in overtime with comebacks last week. The Colts already won at Tennessee this month.

Tennessee has its best record after 10 games since going 10-0 in 2008, in part because the Titans have a league-low five turnovers. Derrick Henry became the first player in league history with multiple overtime rushing touchdowns in a single season and leads the NFL with 1,079 yards.

“That’s just what they do,” Colts defensive coordinator Matt Eberflus says of Tennessee's run game. “They are just going to stay committed to it, and we have to stay — we feel like we’re in good shape in terms of our perseverance, in terms of our discipline and we will want to take that in the game and being able to finish."

The Colts have won four of their past five overall and four of the past five in this series. QB Philip Rivers (right big toe) hopes to make his 235th consecutive start, which would break a tie with Eli Manning for the 10th-most starts in league history.

Neither side comes into this renewal of the league's longest rivalry playing their best. Indeed, Chicago has dropped four in a row as its offense has disappeared. Green Bay is 3-3 after a 4-0 start.

The Packers have won their past four home matchups with the Bears. Green Bay has gone 19-5 against Chicago when Aaron Rodgers is the starting quarterback.

Clearly, the way the Eagles have played has made their NFC East lead a mirage. And they're in the midst of the toughest part of their schedule.

The Seahawks, meanwhile, are in the easiest portion, home meetings with both New York teams and a trip to Washington upcoming before finishing with divisional affairs with the Rams and 49ers. If Seattle's defense that finally showed up in last week's victory against Arizona is for real, Pete Carroll's crew should be in good shape.

A huge break for the Giants, who actually are playing the best among the dregs of the NFC East. They won't have to face rookie sensation Joe Burrow after the quarterback and top overall draft choice tore knee ligaments in a loss at Washington.

“I think when you look at this division, this is really the starting point for the division,” Giants coach Joe Judge says. “We’re coming out of Thanksgiving after this weekend, everyone is really on equal ground. The only thing that matters is what we do from this point forward.”

Like the Ravens and Bengals in their division, the Browns have had some COVID-19 issues and will be without their best player, edge rusher Myles Garrett, for the second consecutive week. Cleveland has built its record by beating whoever it should, and certainly the Jaguars, losers of nine in a row, fit that category.

Jacksonville will go with yet another QB, journeyman Mike Glennon, who steps in for Jake Luton, who stepped in when Gardner Minshew was injured.

Had the Dolphins not stumbled in Denver, this could be considered a trap game. Instead, look for a determined bunch from Miami, which figures to shut down the inept Jets with its strong defense.

New York, threatening to become the third franchise to go 0-16 in a dozen years, hopes to get the oft-injured Sam Darnold back behind center. The Jets really need to evaluate him over the final six weeks as they head toward major decisions.

No major QB decisions ahead for these teams. Buffalo took Josh Allen four spots after Darnold went in 2018 and has no reason to regret it. The Chargers grabbed Justin Herbert with the sixth overall spot in April and are thrilled with him.

The Chargers finally overcame their late folds in beating the Jets last week, while the Bills had a bye. Watch the performances of outstanding wideouts Keenan Allen of LA and Stefon Diggs of Buffalo.

It's been stunning to see the Patriots flop against mediocre or worse teams, with losses to injury-wrecked San Francisco, inconsistent Denver, and awful Houston last week. They seem to have little direction on offense, and the last time we could say that was 20 years ago.

Arizona is right in the playoff mix in the NFC West and the conference, with two games against the division-leading Rams remaining. Cardinals quarterback Kyler Murray has to know that New England neutralized the similar style of Lamar Jackson two weeks ago.

At least the 49ers had a week off to get somewhat healthier, but this is a shell of the conference championship squad. Its reward upon returning is perhaps the NFC's most balanced squad.

The Rams don't particularly run the ball well, but their dynamic passing attack makes up for that — and more. They won at Tampa Bay on Monday night even though Aaron Donald wasn't quite the force he usually is. Keep an eye on No. 99 in this one

As Taysom Hill stepped in so admirably for the sidelined Drew Brees, the Saints seized the top spot in the NFC. It's Hill's show for now, and the New Orleans defense appears ready to keep things rolling. Considering the only remaining opponent with a winning record, albeit a formidable one, is Kansas City, the rest of the schedule could be, well, a Big Easy.

Denver, as up and down as anyone, ran all over Miami's tough D last week. So the Broncos are no pushover.

Lack of defense could be decisive here. The Raiders have 11 sacks in the first 10 games, ranking 31st in the league. They allowed Kansas City to score touchdowns on two drives of at last 90 yards last week after giving up none in the first nine games. And they lost that game for just the third time in the past seven seasons when scoring at least 30 points.

The Falcons have 17 sacks to rank 24th in the league. And they are vulnerable in protection: Matt Ryan was sacked eight times by the Saints last Sunday.

The Vikings truly blew an opportunity by losing at home to Dallas and are 1-4 at home. The Panthers had their first shutout in 82 games when they manhandled Detroit as Brian Burns had a career-high two sacks. He leads all defensive ends in total tackles with 42.

Like the Cowboys, Carolina has the receivers to damage Minnesota's spotty secondary.

Week 16 is one NFL fans truly can celebrate: 4 days of games

Let the hype begin for Chiefs-Saints. You know it's coming

Matchup of division leaders isn't quite what you'd expect

Colts could go from outsider to contender by beating Packers