Both starting offensive tackles were lost to injury on their first drive of the game, Ezekiel Elliott lost another fumble and there were several questionable coaching decisions for the Dallas Cowboys when they could have taken over the NFC East lead.

Coach Mike McCarthy’s first season in Big D isn’t a total loss yet, but the Cowboys missed a chance to take some significant momentum into December after a 41-16 division loss to Washington on Thanksgiving Day.

Things didn't really get out of hand until the Cowboys (3-8), then down only four points, failed to convert on a fake punt on fourth-and-10 from their 24 early in the fourth quarter. Washington scored on the next play. 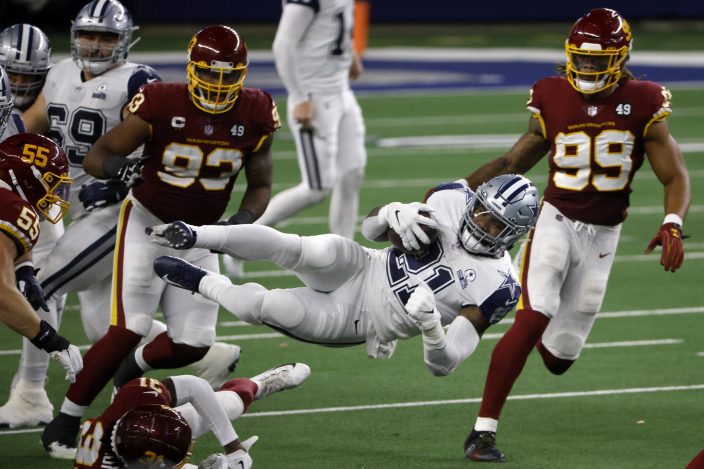 Dallas Cowboys running back Ezekiel Elliott (21) leaps forward on a carry for a first down between Washington Football Team's Cole Holcomb (55), Kamren Curl (31), Jonathan Allen (93) and Chase Young (99) in the second half of an NFL football game in Arlington, Texas, Thursday, Nov. 26, 2020. (AP PhotoRon Jenkins)

“You won’t get anywhere if you’re thinking about negatives all the time,” McCarthy said when trying to defend that call. “You can never covert them obviously if you don’t call them and if you don’t believe in them. So I clearly understood the situation when it was called.”

Washington later added two touchdowns in a span of 8 seconds, including defensive end Montez Sweat tipping and basically snatching the ball from Andy Dalton for a 15-yard interception return.

The Cowboys played a day after strength and conditional coordinator Markus Paul died. The 54-year-old former NFL safety and longtime strength coach had collapsed in his office at the team's facility Tuesday, then was taken to a hospital for what the team has only called a medical emergency. 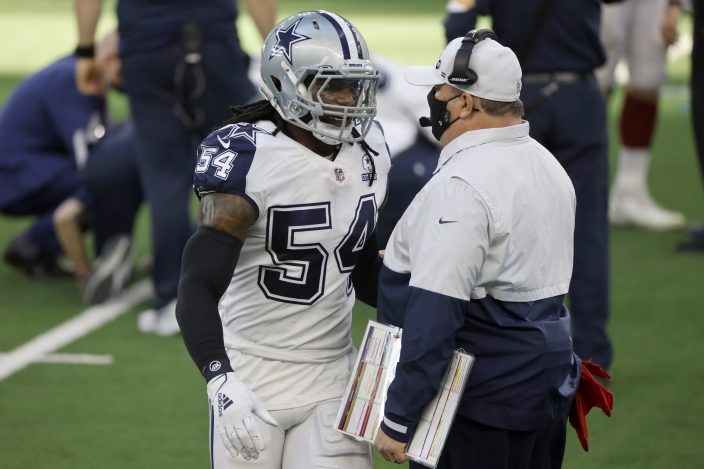 Dallas Cowboys linebacker Jaylon Smith (54) talks with head coach Mike McCarthy, right, during an injury time out in the first half of an NFL football game against the Washington Football Team in Arlington, Texas, Thursday, Nov. 26, 2020. (AP PhotoRon Jenkins)

A moment of silence was observed before kickoff for Paul, who was in his third season with the Cowboys.

“Very disappointing loss,” linebacker Jaylon Smith said. “Suffered just a tragic, tragic loss in Markus Paul. He touched so many lives, all our lives and families and things of that nature. We really wanted to come out and do it for Markus, and we didn't accomplish the mission, so it's tough.” 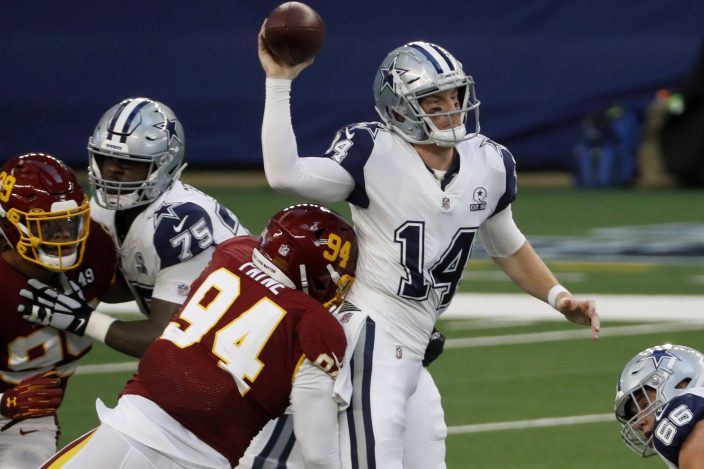 Smith had a 43-yard interception return in the third quarter, but was dragged down at the 4, short of a tying touchdown. The Cowboys had two plays that lost yardage before an incompletion that led to a field goal.

“I should have scored,” Smith said.

Dallas was coming off a victory at Minnesota four days earlier that ended a four-game losing streak, a boost in a wide-open NFC East since every team will go into December with a losing record. The Cowboys are 2-4 at home, and have given up at least 34 points in five of those games.

Still, the game was tied at 10 in the second quarter when the Cowboys went for it on fourth-and-1 from their 34. Dalton's pass was incomplete, and an unnecessary roughness penalty set up Washington at the 19 for a quick touchdown drive that put them ahead to stay.

Dallas got a field goal just before halftime, after converting a fourth-and-1 from midfield, but Elliott fumbled on the second play after halftime to set up a Washington field goal.

It was the fifth fumble lost by Elliott this year — he had never lost more than two in a single year. His sixth fumble overall matched his career high.

Washington (4-7) took over the NFC East lead, at least briefly, before Philadelphia (3-7-1) and the New York Giants (3-7) play this weekend.

While the Cowboys were swept in their season series against Washington, they will finish the regular season against the Eagles and Giants. They first go to Baltimore next Thursday before games against Cincinnati and San Francisco.

Cowboys strength and conditioning coordinator Markus Paul died Wednesday, a day after experiencing a medical emergency at the team’s facility. The 54-year-old Paul was in his third year with the team. The Cowboys canceled practice Tuesday after Paul, a former NFL defensive back, was taken to the hospital. Paul and Washington coach Ron Rivera were teammates with the Chicago Bears. The Cowboys said the cause of death was pending.