Brazil and Argentina are long rivals for soccer supremacy in South America, and Brazilians naturally think of their own Pelé as the best footballer in history. But they are putting aside the argument to mourn the death of Argentine superstar Diego Maradona.

Ex-presidents, author Paulo Coelho and former competitors were among Brazilians paying tribute to Maradona for his influence on the game and charisma off the field. Brazilian newspapers that only put sports in their top headline when the national team wins a World Cup had Maradona's death in that position Thursday.

A mural of Maradona was even painted on a wall in the Vila Cruzeiro favela in Rio de Janeiro, an honor that proud and soccer-crazy Brazilians rarely, if ever, give to foreigners. 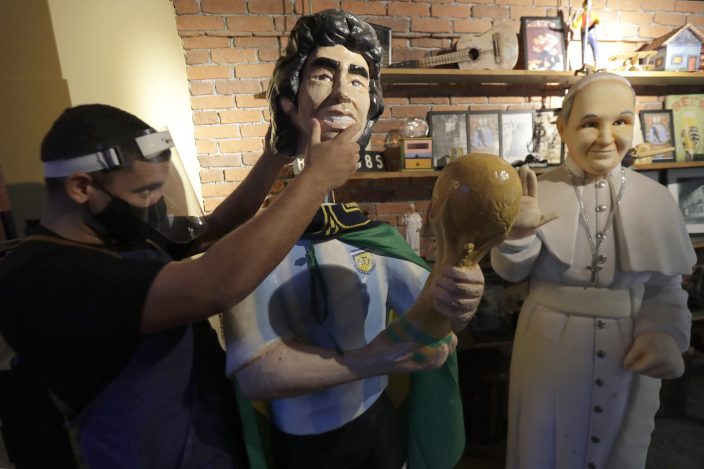 An employee places the head of a sculpture of late Argentine soccer legend Diego Maradona as it stands next to a Pope Francisco sculpture at the Caminito theme bar, in Brasilia, Brazil, Wednesday, Nov. 25, 2020. The Diego Maradona, the Argentine soccer great who was among the best players ever and who led his country to the 1986 World Cup title before later struggling with cocaine use and obesity, died from a heart attack on Wednesday at his home in Buenos Aires. He was 60. (AP PhotoEraldo Peres)

“He was an example of persistence and perseverance because he grew in life as a human being,” said graffiti artist Angelo Campos, who painted an energic Maradona in a blue shirt under an inscription with his nickname, “El Pibe de Oro” (the Golden Kid). “He finished his life as a human being because he fought to overcome his problems.”

Maradona suffered from drug and alcohol addiction, which for many years led Brazilian fans to make chants to mock the Argentinian hero and his hardcore fans. But not now.

The Neo Quimica Arena in Sao Paulo displayed a triumphant Maradona image on a giant screen by its main entrance. That is the same stadium where most Brazilian fans cheered against Argentina in the 2014 World Cup semifinal against Holland. Argentina won on penalties but went on to lose the final to Germany 1-0. 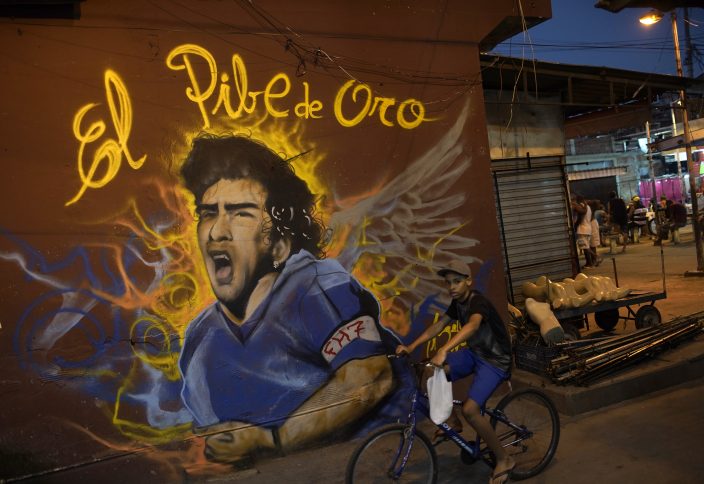 A boy rides his bike next to a mural made by graffiti artist Angelo Campos in honor of late Argentine soccer legend Diego Maradona at a favela in Rio de Janeiro, Brazil, Wednesday, Nov. 25, 2020. The Diego Maradona, the Argentine soccer great who was among the best players ever and who led his country to the 1986 World Cup title before later struggling with cocaine use and obesity, died from a heart attack on Wednesday at his home in Buenos Aires. He was 60. (AP PhotoSilvia Izquierdo)

All top-tier Brazilian clubs paid tributes, including Santos, where Pelé played nearly all of his career.

Brazilians' respect for Maradona also shows up in a curious statistic — the Spanish name Diego was one of the most picked names for boys in this Portuguese-speaking nation in 1990, the year that Argentina beat Brazil 1-0 at the World Cup. More than 180,000 Brazilian children were named after Maradona that year.

The 1990 win was Maradona's only victory over Brazil in six matches. He lost three times to Argentina's archrival, with the most bitter coming in the 1982 World Cup. The young Maradona, who was already seen by many as one of the best players in the world, was sent off in the last minutes of the match after a foul and the Argentine later confessed he also had wanted to punch Brazilian player Paulo Roberto Falcão because of the rivalry.

Falcão said Thursday that he didn't remember Maradona saying that.

Maradona was a frequent visitor to Brazil's Carnival festivities, made ads for local companies, and played a charity match in Rio de Janeiro organized by another soccer great, Zico.

In 1998, a year after his retirement, Maradona showed up at Rio's Carnival parade, which he called the most beautiful show in the world.

“I would like to feel Brazilian,” Maradona said then.

Brazilian player Careca played with Maradona at Napoli in the Italian league and was one of his closest friends.

“In the beginning of his career he was a bit bitter against Brazil, but I think over time he was softened by me and others he got to know,” Careca told a local radio. “He then saw Brazilians loved him after the 1986 World Cup. Brazilians love dribbling players, no matter where they come from.”

Also despite the national rivalry, Maradona often expressed reverence for the play of Roberto Rivelino, a player on the Brazil team that won the 1970 World Cup who was known for his short dribbles and powerful shots.

Rivelino lamented Maradona's death in a social media post that included a picture of the Argentina holding a Brazil jersey that he had autographed.

“We lost one of the best players in the world,” Rivelino wrote. “And a special person in my life."

Malala takes her passions to the small screen with Appl ...

Malala Yousafzai is a Nobel laurea ...

A sweeping bill that would extend ...