MELBOURNE, Australia — From nearly 8,000 active cases in August and more than 800 deaths in the Australian state of Victoria to the elimination of the coronavirus: It’s an achievement that one Melbourne doctor says he thought was unthinkable only three months ago.

Friday marked four weeks without a new case of COVID-19 and 9,828 Victorians were tested in the past 24 hours.

Health authorities say 28 days with no new cases means the virus has been eliminated from the community, given that the time represents two 14-day incubation periods. 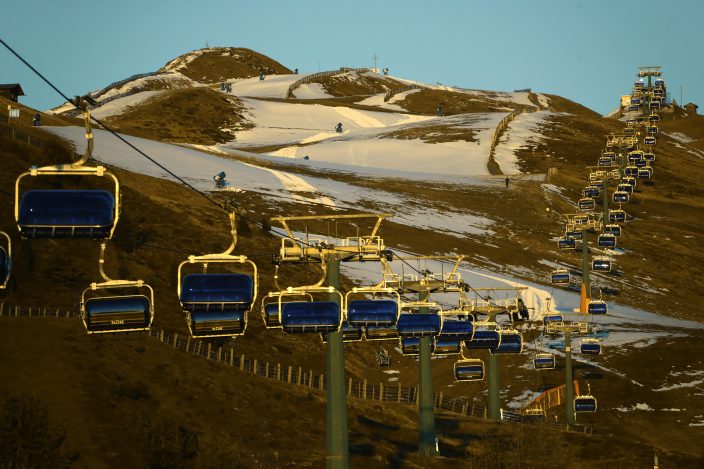 A chairlift is illuminated besides snow makers as the sun sets near Bressanone in northern Italian province of South Tyrol, Italy, Thursday, Nov. 26, 2020. In South Tyrol the preparations begin for the restart after the second lockdown. (AP PhotoMatthias Schrader)

Victoria reached 7,880 active cases on Aug. 11. The last COVID-19 patient in a Victorian hospital was discharged on Monday, leaving the state without an active case.

The resurgence had forced a lockdown in Melbourne, an overnight curfew and travel and family gathering restrictions. Premier Daniel Andrews was criticized repeatedly over several months for his strict guidelines.

“It is an emotional thing. My training makes me wary about ever saying we’ve reached the finish line here,” Melbourne doctor Stephen Parnis told Australian Broadcasting Corp. radio. “But the fact that in about three months we’ve gotten to this point, no one would have been able to suggest that would even come close to this.” 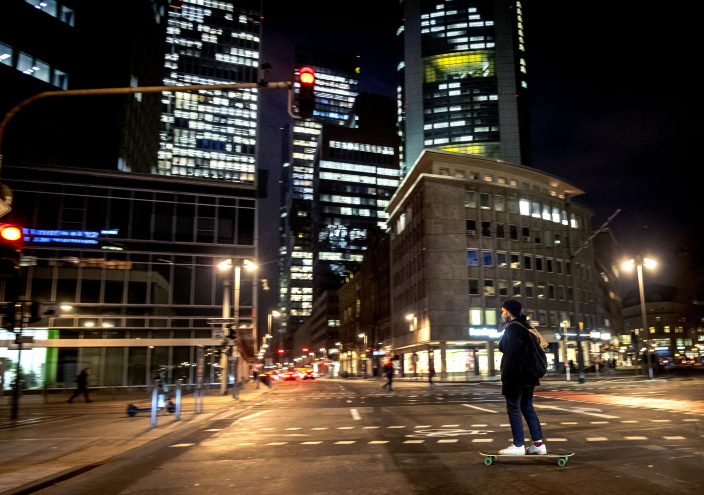 A young man wears a face mask as he crosses a road on his skateboard in downtown Frankfurt, Germany, Thursday, Nov. 26, 2020. The German parliament discussed the new restrictions to avoid the outspread of the coronavirus today. (AP PhotoMichael Probst)

Australia’s death toll from the virus is 907 and 819 of them are from Victoria.

— The pandemic is turning this into a holiday shopping season like no other. Toy companies are targeting stuck-at-home grown-ups with latte-smelling Play-Doh and Legos that turn into Warhols.

— Most people in England will continue to face tight restrictions on socializing and business after a nationwide lockdown ends next week.

TOKYO — Japanese Emperor Naruhito and his family will not offer their New Year greetings from the palace balcony due to concerns over the country’s struggles with a resurgence of coronavirus infections.

The Imperial Household Agency said in a statement Friday that the annual greetings on Jan. 2 will not be held. The event traditionally draws tens of thousands of well-wishers to the palace garden. The greeting was last canceled in 1990 following the death of Naruhito’s grandfather.

Emperor Naruhito and his family have rarely made public appearances since the pandemic began, due to cancelation of palace events.

Experts have urged the government to reduce social and business activity before the holiday season because of a rise in serious coronavirus cases.

SEOUL, South Korea — South Korea’s daily coronavirus tally is above 500 for a second straight day and the country’s prime minister is urging the public to stay at home this weekend to contain a viral resurgence.

Prime Minister Chung Sye-kyun said Friday that people should avoid social gatherings and refrain from going out in public this weekend. South Korea has seen a spike in fresh infections since it eased tough social distancing rules last month.

Authorities reported 569 newly confirmed infections over the past 24 hours, raising the country’s total to 32,887 for the pandemic, with 516 deaths. The 583 new cases reported Thursday was the first time that South Korea’s daily tally had exceeded 500 since March.

ST. LOUIS — More Missouri counties in the region around St. Louis are imposing mandates requiring the use of face masks as coronavirus cases and hospitalizations surge.

The move comes amid an unsuccessful campaign by health officials in that area to get Gov. Mike Parson to require masks statewide.

NEW YORK — New York Gov. Andrew Cuomo says officials are working on a winter plan for the coronavirus that will add metrics for how the state designates virus hot zones.

On Thursday, Cuomo said the state will continue homing in on small geographic areas where virus cases are a particular problem to avoid imposing broad statewide restrictions, considering factors such as the hospitalization rate and the availability of ICU beds.

The new plan will add factors like the hospitalization rate and the availability of ICU beds to determine the location of the hot spots.

Cuomo said the winter plan will also look at ways to keep schools open, evaluating a safe positivity rate as well as determining the levels of testing needed at schools over the winter months. The plan will also outline how vaccines will be distributed as they become available.

Long-term care facilities have been particularly hard hit, with cases in them accounting for 1,038 of the state’s 2,312 deaths. The three new facilities reporting outbreaks brings the total that have been hit to 152.

Health department data also shows fewer Iowa counties are reporting a 14-day positivity rate greater than 15%. There are now 88 counties with a rate at 15% or higher, down from 91 the day before. Schools in those counties can apply for a waiver to provide 100% distance instruction.

Sixty-two Kansas counties now have orders in place, with many coming as Kelly’s new statewide mask order went into effect Wednesday, according to a list compiled by the Kansas Association of Counties. The remaining 43 of the counties have opted out, but most are encouraging or recommending people wear masks, The Kansas City Star reports.

It’s a stark contrast to the response Kelly received to her first mask order in July, when the majority of counties opted out.

Meanwhile, a Lawrence hotel will serve as a shelter for individuals who need to quarantine or isolate after a positive COVID-19 test or exposure to a positive case, a press release from Douglas County and its Unified Command partners said.

The Kansas Division of Emergency Management is providing funding for shelter services at the Baymont Inn and Suites, the Lawrence Journal-World reports. It’s available to homeless individuals, those who cannot safely isolate or quarantine at home due to numerous people living in the same home and first responders and those who work in high-risk professions.

PIERRE, S.D. — One group of South Dakotans marked the Thanksgiving holiday by setting up a makeshift memorial near the state Capitol in Pierre for those who have died from COVID-19.

A group called Stop the Spread set up over 800 empty chairs on the Capitol grounds, representing each person who has died. The state has tallied 849 COVID-19 deaths, with 424 of those deaths coming in November.

That death count is the 41st highest in the country overall, but the 11th highest per capita, according to Johns Hopkins researchers.

While the state maintained one of the nation’s lowest death rates per capita throughout the summer and into the fall, a wave of cases has led to a skyrocketing rate of deaths in recent weeks.

MADRID — Spain’s infection and fatality figures in the resurgence of COVID-19 are continuing to edge down, with the country posting 12,289 new cases and 337 deaths.

The 14-day cumulative number of COVID-19 cases per 100,000 of population, a recognized measure of the pandemic’s spread, also fell Thursday, to 325.

That is far off the Nov. 9 peak during the resurgence, when it stood at 529, and comes amid nationwide measures restricting movement and social gatherings.

The government admits the trend is favorable but wants to maintain caution until its target rate of 25 cases per 100,000 of population is reached.

Dr. Supriya Sharma says the Health Canada review is most advanced for the vaccine being developed by Pfizer and BioNTech. She says Canada is reviewing it alongside the United States and Europe, and expects it will be approved here at the same time it is given emergency authorization in the U.S.

The U.S. Food and Drug Administration is meeting Dec. 10 to consider whether to give the go-ahead to Pfizer. Canada has a purchase deal to buy at least 20 million doses of Pfizer’s vaccine, with the first four million of those on track to arrive before the end of March.

Sharma says she expects the first shipments of the Pfizer vaccine in January but it is possible Canada could begin receiving the first doses before the end of the year.