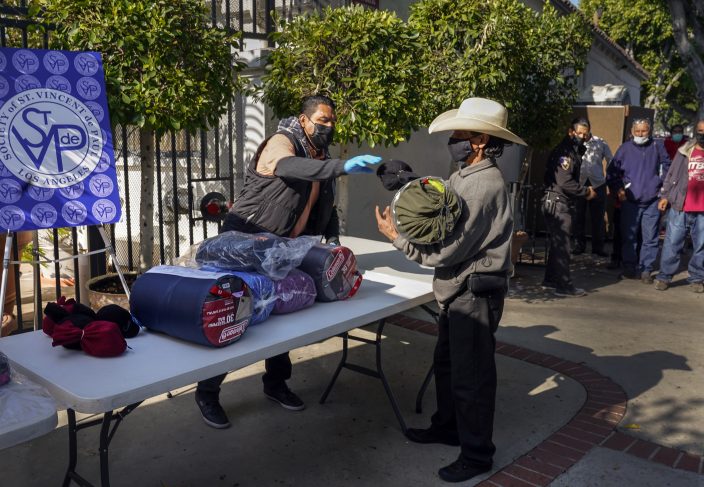 TRUMP-ELECTION CHALLENGES — President Donald Trump says he will leave the White House if the Electoral College formalizes President-Elect Joe Biden’s victory — even as he insisted such a decision would be a “mistake” — as he spent his Thanksgiving renewing baseless claims that “massive fraud” and crooked officials in battleground states caused his election defeat. By Jill Colvin. SENT: 790 words, photos.

VENEZUELA-JAILED-US-OIL-EXECUTIVES — Hopes of families for a quick release for six American oil executives detained in Venezuela for three years over an alleged corruption scheme have evaporated, with a judge finding them all guilty and quickly sentencing them to prison. Attorneys and relatives of the so-called Citgo 6 said the men were wrongly convicted. By Scott Smith. SENT: 1,190 words, photos. 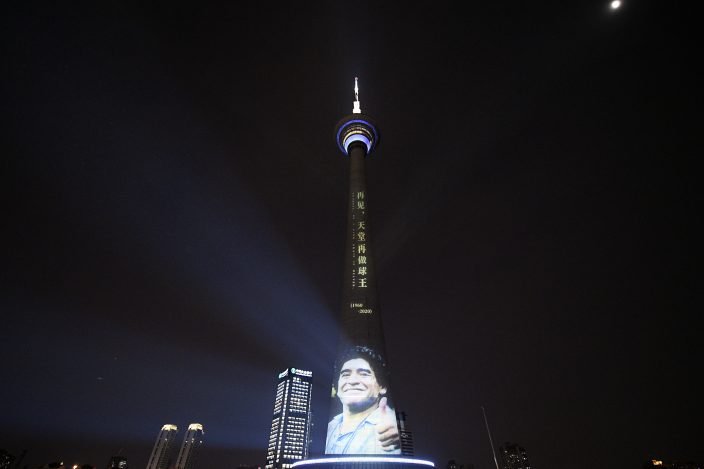 An image of soccer legend Diego Maradona is projected onto a TV tower in Tianjin, China, Thursday, Nov. 26, 2020. The Argentine soccer great who was among the best players ever and who led his country to the 1986 World Cup title died from a heart attack at his home Wednesday, at the age of 60. (Chinatopix via AP)

VIRUS OUTBREAK-THANKSGIVING — Americans are marking the Thanksgiving holiday amid an unrelenting pandemic that has upended traditions at dinner tables all around the country. Zoom and FaceTime calls are fixtures this year, and people who have lost family members to the virus are keeping an empty seat to honor their loved ones. Far fewer volunteers will help at soup kitchens or community centers. By Regina Garcia Cano, Matt Sedensky and Heather Hollingsworth. SENT: 1,220 words, photos.

MARADONA-FUNERAL —Soccer superstar Diego Maradona was buried in a private ceremony attended by only two dozen people — a stark contrast to earlier in the day when tens of thousands of weeping fans filed past his coffin for hours in an observance that mixed head-of-state-like honors with the chaos of a rowdy stadium. By Almudena Calatrava and Debora Rey. SENT: 1,160 words, photos, video. WITH: MARADONA-BRAZIL MOURNS — Brazil and Argentina are long rivals for soccer supremacy in South America, and Brazilians naturally think of their own Pelé as the best footballer in history. But they are putting aside the argument to mourn the death of Maradona. Ex-presidents, author Paulo Coelho and former competitors were among Brazilians paying tribute to Maradona for his influence on the game and charisma off the field. By Mauricio Savarese. SENT: 640 words, photos.

US-VIRUS-OUTBREAK —After months of slumping sales and businesses toppling into bankruptcy, Black Friday is offering a small beacon of hope amid the crushing coronavirus pandemic. By Retail Writer Anne D’innocenzio. SENT: 790 words, photos. WITH: US-VIRUS-OUTBREAK-HOLIDAY-TRENDS — The pandemic is turning this into a holiday shopping season like no other. Toy companies are targeting stuck-at-home grown-ups with latte-smelling Play-Doh and Legos that turn into Warhols. And with more people shopping online, stores are doing double duty as shipping centers to try to get gifts to doorsteps as fast as possible. By Retail Writers Joseph Pisani and Anne D’Innocenzio. SENT: 850 words, photos. 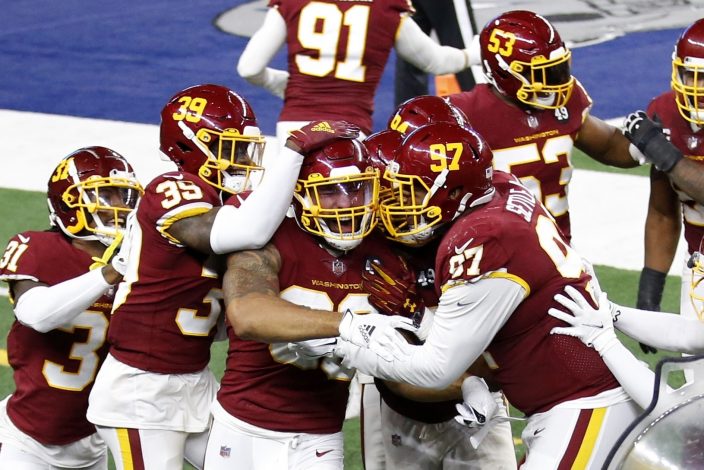 Washington Football Team's Montez Sweat, center, is congratulated by Jeremy Reaves (39), Tim Settle (97) and others after scoring a touchdown on a Dallas Cowboys' Andy Dalton interception in the second half of an NFL football game in Arlington, Texas, Thursday, Nov. 26, 2020. (AP PhotoRoger Steinman)

VIRUS-OUTBREAK-LETTERS-TO-SANTA — Letters pouring by the tens of thousands into Santa’s mailbox at a postal sorting office in France offer a glimpse into the worries and hopes of children awaiting a pandemic-hit Christmas. SENT: 800 words, photos. WITH: VIRUS-OUTBREAK-LETTERS-TO-SANTA-EXCERPTS — Excerpts from letters sent to Santa that have been received by his sorting office in France. SENT: 230 words, photo. 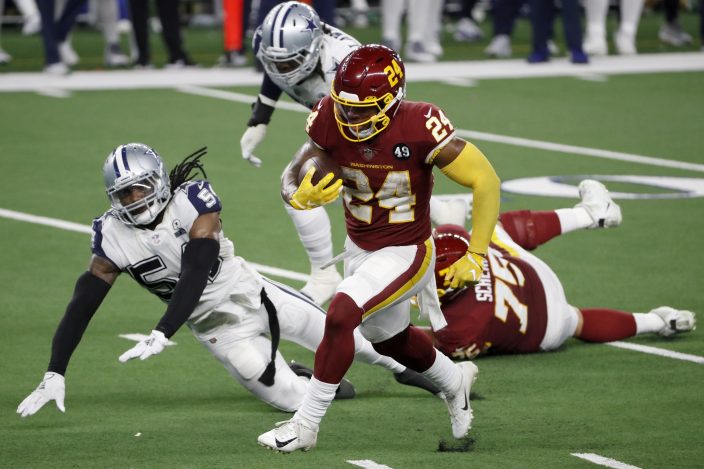 Washington Football Team running back Antonio Gibson (24) sprints to the end zone past Dallas Cowboys linebacker Jaylon Smith (54) for a touchdown in the second half of an NFL football game in Arlington, Texas, Thursday, Nov. 26, 2020. (AP PhotoRoger Steinman)

PAKISTAN-LONELIEST-ELEPHANT — Iconic singer and actress Cher is set to visit Pakistan to celebrate the departure of Kaavan, dubbed the “world’s loneliest elephant,” who will soon leave a Pakistani zoo for better conditions after years of lobbying by animal rights groups and activists. 390 words, photo.

ONE GOOD THING-LIBRARY ON MOTORBIKE — During his leisure time, Mahinda Dasanayaka packs his motorbike with books and rides his mobile library — across mostly muddy roads running through tea-growing mountain areas — to underprivileged children in rural parts of Sri Lanka. SENT: 840 words, photos.

OBIT-JAMES-WOLFENSOHN — James Wolfensohn, who served as the president of the World Bank for 10 years and was a guiding force for a couple of the most well-known cultural institutions in the U.S., has died. He was 86. SENT: 210 words, photos.

VIRUS OUTBREAK-BRITAIN-VACCINE — The British government has formally asked the country’s medicines regulator to assess whether a coronavirus vaccine developed by AstraZeneca and Oxford University should be authorized for use. The step comes amid questions about preliminary results from trials of the jab, after the company and the university acknowledged that the most encouraging part of their findings stemmed from a dosing error. By Jill Lawless. SENT: 600 words, photos.

GREECE-VIRUS OUTBREAK-CLASS STRUGGLE — In empty classrooms across Greece, teachers are holding online lessons after the government ordered that all tuition, from pre-school through to university, must take place remotely. SENT: 720 words, photos.

VIRUS-OUTBREAK-ASIA — South Korea’s daily virus tally hovered above 500 for the second straight day, as the country’s prime minister urged the public to stay home this weekend to contain a viral resurgence. SENT: 710 words, photos. WITH: VIRUS-OUTBREAK-THE-LATEST —From nearly 8,000 active cases in August and more than 800 deaths in the Australian state of Victoria to the elimination of the coronavirus: It’s an achievement that one Melbourne doctor says he thought was unthinkable only three months ago. SENT: 1,550 words, photos, developing.

VIRUS OUTBREAK — Americans, millions of whom traveled against the advice of public health officials, tried to stay safe before they hunkered down with their families for Thanksgiving, a holiday remade by the pandemic as case numbers and death tolls rise. SENT: 570 words, photos, video.

INDIA-HOSPITAL-FIRE — A fire broke out at a privately-run hospital treating coronavirus patients in western India, killing at least five of them and injuring 28 others. SENT: 140 words.

BIDEN-CLEAN-AIR — Mary Nichols will soon leave her job as California’s top air regulator after more than four decades of advocating for ambitious climate policies and defending them against pushback from Trump. Nichols hopes she can continue that work as the next administrator of the Environmental Protection Agency under the Biden administration, but she's likely to face opposition from Republican senators. SENT: 1,060 words, photos.

ZOMBIE-ELECTION — It seemed the end was coming for Trump’s relentless challenges to the election, after the federal government acknowledged Biden was the “apparent winner” and Trump cleared the way for cooperation on a transition of power. But his baseless claims have a way of coming back. And back. And back. By Colleen Long, Alanna Durkin Richer and Zeke Miller. SENT: 1,040 words, photos.

NEW-ZEALAND-FOREIGN-MINISTER-INTERVIEW —Nanaia Mahutu is the first indigenous Maori woman to be appointed foreign minister in New Zealand, and promises to bring a new perspective to the role. SENT: 750 words, photos.

IRAN-AUSTRALIA — Academic Kylie Moore-Gilbert has arrived back in Australia and will soon reunite with her family after more than two years in an Iranian prison. SENT: 90 words, photo.

MEXICO-ETHICAL-GUIDE — Few world leaders talk about morals and ethics as much as Mexican President Andrés Manuel López Obrador, and he has now presented an “Ethical Guide for the Transformation of Mexico.” López Obrador took office two years ago pledging government austerity and an end to corruption. SENT: 220 words.

CHINA-AUSTRALIA-WINE-IMPORTS — China is raising import taxes on Australian wine, stepping up pressure on Australia over disputes including its support for a probe into the origin of the coronavirus. SENT: 280 words, photo.

BRITAIN-TECH REGULATION —Britain plans to create a new watchdog to police big tech companies including Google and Facebook to counter their market dominance and prevent them from exploiting consumers and small businesses. SENT: 430 words.

Ash Barty is set to return to the ...