The retail empire of tycoon Philip Green, which owns well-known British fashion chains like Topshop, appears to be on the brink of collapse following the economic shock of the coronavirus pandemic.

In another devastating blow to the British retailing industry in the run-up to the crucial Christmas trading period, Arcadia Group said Friday it is working on “contingency options to secure the future of the group’s brands.”

Like other high street names, Arcadia's brands - which employ around 15,000 people and include Burton, Miss Selfridge and Dorothy Perkins - have suffered during the pandemic and the associated restrictions across the U.K., including two national lockdowns in England. 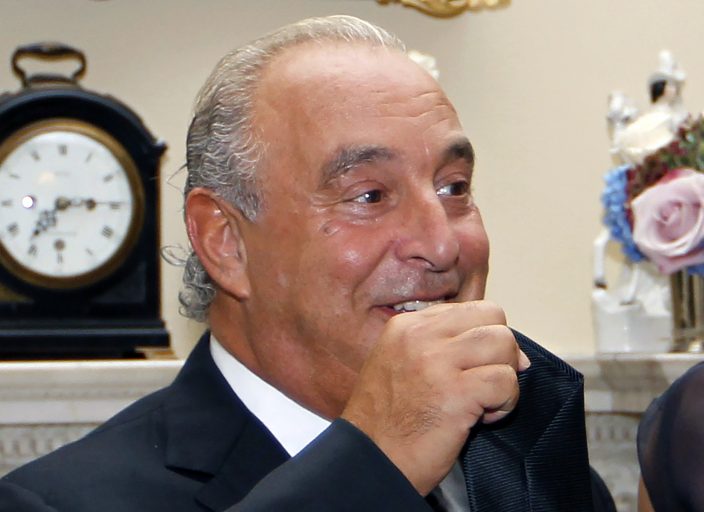 FILE - In this file photo dated Tuesday, Sept. 20, 2011, owner of fashion retail outlet Top Shop, Philip Green during a reception at 10 Downing Street in London. Some 15,000 retailing jobs in Britain are in peril after Arcadia Group, owner of some of the country's best-known fashion chains like Topshop, confirmed Friday Nov. 27, 2020, that it is in talks about its future. (AP PhotoSang Tan, Pool)

Competition has increased from low-cost rivals like Primark, as well as from online disruptors such as ASOS and Boohoo. Critics have also said that Green, who has been embroiled in a series of controversies over the past few years, has not invested enough in the businesses to get them in shape to deal with the new competition in retail.

In a statement, the group sought to blame the virus for its woes. It said the "forced closure of our stores for sustained periods as a result of the COVID-19 pandemic has had a material impact on trading across our businesses.”

However, it stressed that its brands “continue to trade” and that its stores will be opening again in England as soon as coronavirus restrictions are lifted next week.

England is in a four-week lockdown that has forced the closure of all shops selling items deemed to be non-essential. The lockdown expires on Dec. 2 and shops will be allowed to reopen. The other nations of the U.K. — Scotland, Wales and Northern Ireland — have taken slightly different approaches but all have at various stages reimposed restrictions that closed non-essential shops.

Arcadia has reportedly been in emergency talks with lenders in a bid to secure a 30 million-pound ($40 billion) loan to help shore up its finances.

If it goes into so-called administration as soon as next week, there is likely to be a scramble among creditors to get control of company assets.

It is the latest retailer to have been hammered by the closure of stores in the face of the coronavirus, with rivals in Britain including Debenhams, Edinburgh Woollen Mill Group and Oasis Warehouse all sliding into insolvency since the pandemic struck in March.