Thousands of Sudanese came out Friday in the city of Omdurman for the funeral of the country's last elected prime minister and prominent political party leader Sadiq al-Mahdi, who died of COVID-19.

Al-Mahdi's body arrived earlier in the day from Abu Dhabi in the United Arab Emirates, where he had been flown to receive medical treatment after testing positive for coronavirus in early November.

Al-Mahdi, who was the leader of the National Ummah Party, died Thursday at age 84. Sudan has recorded more than 16,000 coronavirus cases, including 1,215 deaths. 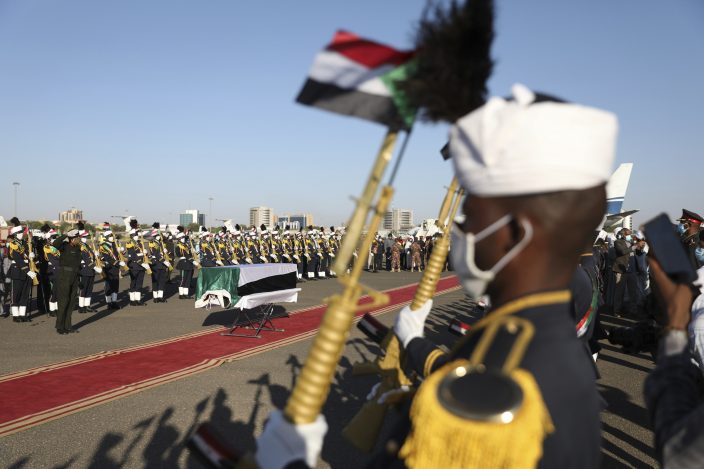 Dozens of military officers, with protective face masks, carried the casket draped with the Sudanese flag and walked out of the airport in a formal military procession.

Thousands of worshippers, mostly men in white robes and turbans wearing protective masks, lined up outside the al-Mahdi family cemetery in Khartoum's twin city of Omdurman. The family was to perform Muslim funeral prayers before placing the body into the ground. Besides his supporters, attendees included members of his political party and followers of the Sufi religious order he led for decades.

Al-Mahdi was the great-grandson of Mohammad Ahmad al-Mahdi, a religious leader whose movement waged a successful war against Egyptian-Ottoman rule in Sudan in the second half of the 19th century.

He studied philosophy, politics and economics at Oxford University. He was both a politician and a theologian and authored several books on Islamic law, democracy and Sudanese politics.

Al-Mahdi served as prime minister from 1986 to 1989 before being overthrown by the military coup that brought longtime dictator Omar al-Bashir to power.

Sudan has been ruled by a civilian-military transitional government since last year, following the uprising that forced the military to overthrow al-Bashir.

Portugal chooses a president amid a severe pandemic sur ...

The unrelenting increase in COVID- ...