Under a punishing Andean sun, Nazario Quispe digs his plow into the soil where he is growing dozens of different potato varieties — uncertain when he will be able to afford the seeds and supplies to sow them again.

Farmers like Quispe are responsible for the food that lands on 70% of Peruvian dinner tables, officials say, but months of pandemic lockdown and a souring economy have left many bankrupt and questioning whether to plant again.

“If my savings dry up, how will I sustain myself?” asked Quispe, a father of five who grows 150 types of the tuber native to Peru from the Sacred Valley highlands. 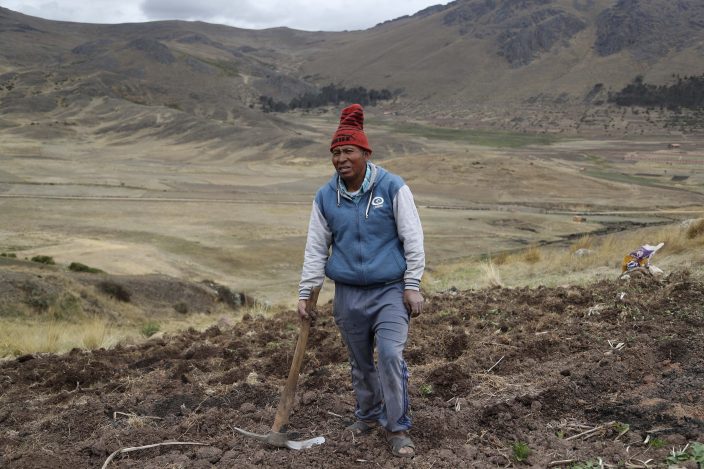 Farmer Ciriaco Huaman holds a pickaxe while standing in his potato field during harvest, in Pisac, southern rural Peru, Friday, Oct. 30, 2020. Farmers like Huaman are responsible for the food that lands on 70% of Peruvian dinner tables, officials say, but months of pandemic lockdown and a souring economy have left many bankrupt and questioning whether to plant again. (AP PhotoMartin Mejia)

Across this South American nation an estimated 7 million peasants like the 51-year-old Quispe toil small plots of land to feed their families and earn a living. Strict quarantines early in the pandemic made transporting beans, potatoes and other crops to markets difficult. Prices plummeted as demand dropped.

Official data shows the price for potatoes dropped at least 30% between March and July. In rural Pampamarca in southern Peru, one kilo used to be worth about five loaves of bread. Now it sells for the equivalent of just one.

Not wanting to let the crops go to waste, farmers like Nemesio Quispe — no relation to Nazario Quispe — have opted to sell for whatever they could. 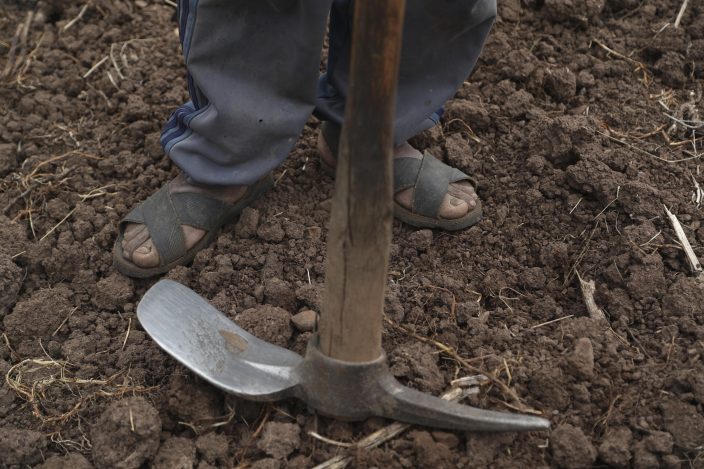 Peru has been severely battered by the pandemic, experiencing both a crushing economic contraction and one of the world’s most lethal coronavirus outbreaks. For months Peru ranked first globally in per capita COVID-19 deaths. The International Monetary Fund projects a 14% decline in GDP this year.

Though peasants have been somewhat shielded by the virus since many live far from other families and major cities, the recession has been costly. Several farmers said they are not able to put certain foods like fruit on the table anymore, because they are too costly. Instead, many subsist on a diet of root vegetables. 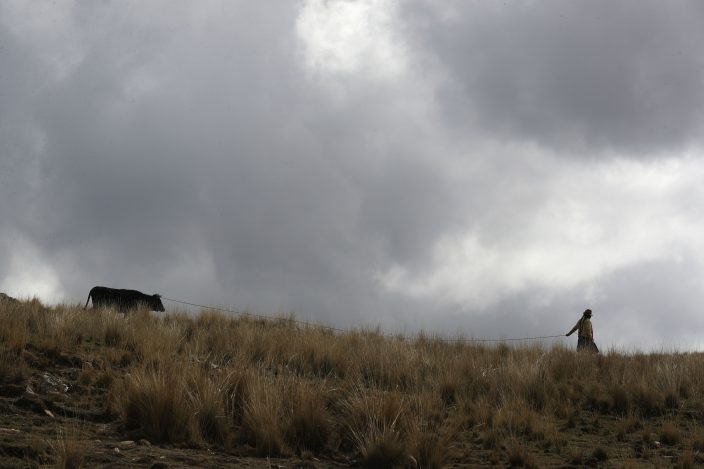 A woman leads her cow through a field in Pisac, southern rural Peru, Friday, Oct. 30, 2020. This year has also been unusually dry in some agricultural regions of Peru. The lack of rain, combined with frigid overnight temperatures, has many farmers worried their crops will go bad if the weather doesn’t improve soon. (AP PhotoMartin Mejia)

Last May, a national survey by the Institute for Peruvian Studies said 90% of those living in rural areas were eating less food than usual. Fifty nine percent said that between March and April they had often gone hungry because they couldn’t afford three daily meals. Many said what they did eat was of poorer quality.

Farmer Marcelino Bohorquez, 50, is trying to see the bright side of the situation, noting many families that had been dispersed across Peru are reunited again because of the pandemic. “For me, it’s a blessing,” he said.

People living in cities have returned to family ancestral lands after losing jobs and being unable to afford rent. Some have gone back to planting their own food, hoping to grow at least enough to eat.

“The place of refuge for peasants has been the parcel of land that at least guarantees them access to food,” said Giovanna Vásquez, a sociologist who is the manager of the National Convention for Peruvian Agriculture, a network of unions.

The government has provided millions in aid to large exporters — a tiny percentage of all producers — but experts said small farmers have been left out.

Carlos Paredes, an economist who directs Sierra Productiva, an initiative helping provide 50,000 farming families with technology, said that Peruvian laws, in practice, discourage business with peasants who are seen as “not profitable.”

“The ministries of agriculture and economy have norms that indicate profitable agriculture is only that with at least 20 hectares (just under 50 acres) of land,” Paredes said. “In Peru, that’s only 3% of the producers that exist — the agricultural exporters.”

Inequitable access to tax credits, water and favorable trade deals have long existed in Peru but are now exacerbated by the crisis.

“They’ve gotten leftovers or nothing,” economist Eduardo Zegarra said of peasant farmers. “That is the central drama in Peru and we shouldn’t lose sight of it.”

Former President Martín Vizcarra, who was removed from office by Congress earlier this month, allotted $42 million to various large agricultural companies. New President Francisco Sagasti has said he intends to support small farmers with access to land, technology and markets, though he hasn't shared any details.

“Hunger now is the result of the pandemic crisis and it’s something we should combat,” Sagasti said.

This year has also been unusually dry in some agricultural regions of Peru. The lack of rain, combined with frigid overnight temperatures, has many farmers worried their crops will go bad if the weather doesn’t improve soon.

That could force the government to import food the country usually produces itself. Already, imports of basic foods like sugar, rice and powdered milk rose this year.

Miriam Trinidad, director of AgroPeru, a news site focusing on the agricultural industry, said that if credits aren’t provided to farmers soon, many “will stop planting, food security will be put at risk and dependency on importing food stuffs will grow.”