Diego Maradona's famous pre-match warm-up routine from 1989 will be broadcast in Italian stadiums this weekend as part of Serie A's tribute to the former Napoli player who died on Wednesday in his native Argentina.

All players will take the field wearing a black armband, and a minute's silence will be observed before the kickoff of each game, with players lined up around the center circle, the league announced on Friday.

During the minute's silence, an image of Maradona will be projected on stadium screens, and the message “ciao Diego” will be shown on the stands — which will be empty because of coronavirus restrictions. 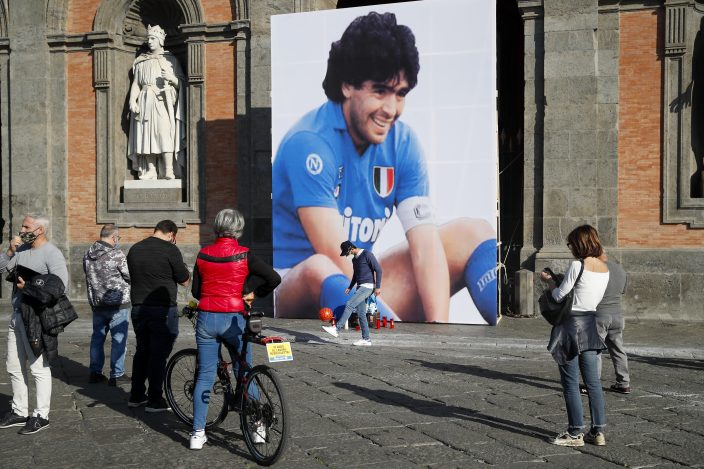 People look at an image of soccer legend Diego Maradona hanging over the facade of Naples' Royal Palace in the central Piazza Plebiscito, Friday, Nov. 27, 2020. Maradona died on Wednesday at the age of 60 of a heart attack in a house outside Buenos Aires where he recovered from a brain operation. (AP PhotoAlessandra Tarantino)

At the 10th minute of each match, the image of Maradona will be projected again, in honor of his jersey number.

During the teams' warmups, the video of Maradona's warmup before Napoli's game against Bayern Munich in 1989 will be broadcast on stadium screens.

Maradona led Napoli to its only two Serie A titles in 1987 and 1990 and is considered a god-like figure in the southern city.

The Argentine died of a heart attack at age 60, two weeks after being released from a hospital in Buenos Aires following brain surgery.

Thousands of Napoli supporters made a pilgrimage to San Paolo Stadium on Thursday to light a candle, leave a scarf or a shirt and shed some tears in memory of their hero. Inside, Napoli beat Croatian side Rijeka 2-0 in a Europa League match.

Thousands of women marched through ...