Travel agencies in countries across the Middle East and Africa say the United Arab Emirates has temporarily halted issuing new visas to their citizens, a so-far unexplained ban on visitors amid both the coronavirus pandemic and the UAE's normalization deal with Israel.

Confusion over the UAE visa ban targeting 11 Muslim-majority nations, in addition to Lebanon and Kenya, swirled after a leaked document from Dubai’s state-owned airport free zone surfaced this week, declaring restrictions against a range of nationalities.

Emirati authorities have not acknowledged the suspension that comes as the UAE welcomes Israeli tourists for the first time in history, the coronavirus pandemic surges across the region and those searching for work in the federation of seven sheikhdoms increasingly overstay their tourist visas amid a cascade of business shutdowns and lay-offs. 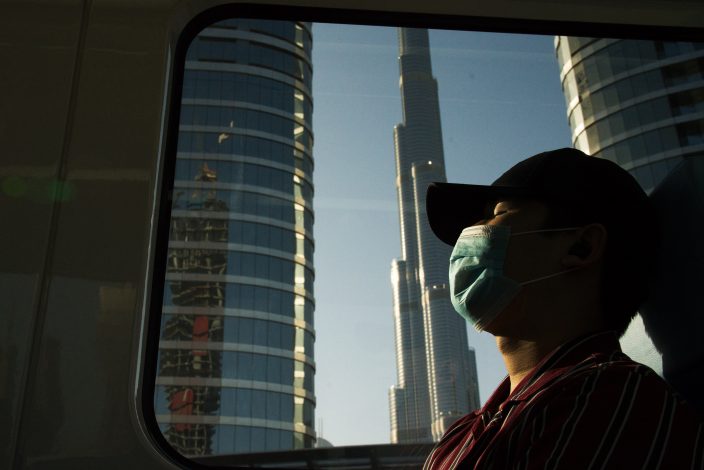 FILE - In this April 26, 2020 file photo, a commuter wearing a face mask to help curb the spread of the coronavirus, sleeps aboard the driverless Metro as it passes the Burj Khalifa, the world's tallest building, in Dubai, United Arab Emirates. Travel agencies in countries across the Middle East and Africa say the United Arab Emirates has temporarily halted issuing new visas to their citizens, a so-far unexplained ban on visitors amid both the coronavirus pandemic and as the UAE normalizes ties with Israel. (AP PhotoJon Gambrell, File)

Citing an order from the country’s immigration authorities, the note to companies operating in Dubai’s airport free zone announced a pause in issuing all new employment, long and short-term visit visas “until further notice” from countries including Afghanistan, Pakistan, Iran, Yemen, Syria, Libya, Iraq and Tunisia, without offering a reason. Those already holding visas would not be affected, it said.

The revelation has gripped social media feeds and news outlets worldwide, underscoring the UAE's global status as magnet for expat workers and visitors who outnumber locals nearly nine to one in the country.

When asked by The Associated Press about the order, the country's immigration department said it’s “not aware of any formal list of nationalities requiring visa suspension.” Dubai’s airport free zone confirmed the veracity of the document to the AP and said it was waiting for further clarification from officials. 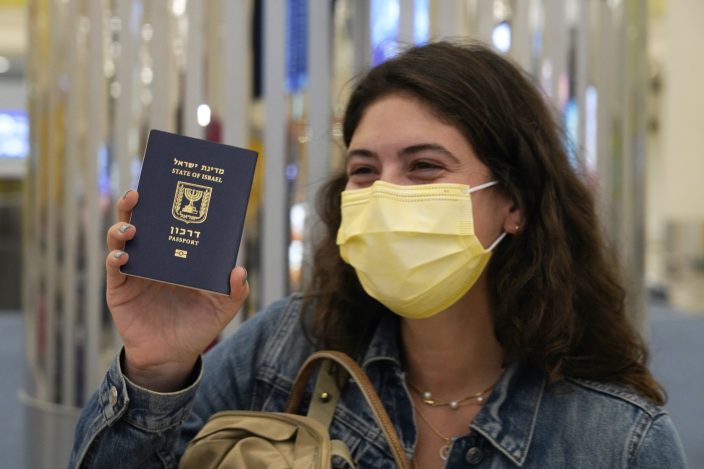 FILE - In this Nov. 26, 2020 file photo, an Israeli passenger from a flyDubai flight from Tel Aviv, Israel, waves her Israeli passport on arrival at Dubai International Airport's Terminal 3 in Dubai, United Arab Emirates. Travel agencies in countries across the Middle East and Africa say the United Arab Emirates has temporarily halted issuing new visas to their citizens, a so-far unexplained ban on visitors amid both the coronavirus pandemic and as the UAE normalizes ties with Israel. (AP PhotoJon Gambrell, File)

Meanwhile, across the region, agencies and authorities say their citizens are forbidden from entering the UAE.

Travel agents in Pakistan said the UAE has barred single men under the age of 50 from the country, although those traveling with family can still obtain visas. Last week, Pakistan’s foreign office said it had “learnt that the UAE has temporarily suspended the issuance of new visit visas” in a move “believed to be related to the second wave of COVID-19.”

Bestways Travel company south of Islamabad was skeptical. “With such specific age and gender limits, obviously this has nothing to do with the coronavirus,” agent Jamchit Agha said. He said it was more likely tied to security concerns, or fears about young men overstaying visas to find jobs in Dubai, the region's financial hub. Dubai relies on millions of low-paid expat workers from Southeast Asia.

Several travel companies across Afghanistan also claimed the UAE had stopped issuing visas to citizens, without offering any explanation.

In Kenya, speculation has spread that the country landed on the UAE's blacklist over a spate of fake certificates showing negative results on coronavirus tests used to travel to the UAE, resulting in 21 arrests Thursday. Four travel agencies in the capital Nairobi said they were seeking clarification from Emirati authorities after dozens of tourist visas were rejected. Travel Shore Africa, one of the agencies, said 40 of its clients bound for Dubai had been blocked from boarding their flight last-minute on Thursday.

Two travel agents in Lebanon, a country that has sent legions of skilled workers to the UAE as its own economy plunged, confirmed visa applications were currently on hold except for those with a foreign passport or residency in a third country. Both companies have stopped issuing visas until they receive clear instructions.

Travel agents in Damascus have struggled over the past two weeks to understand why Syria had been removed from a list of countries eligible to apply for visas online. One agent assumed the omission was a technical glitch until a colleague told him that authorities had also stopped issuing visas to Syrians.

Iraqi Foreign Ministry spokesman Ahmed al-Sahaf said Iraq has not been officially informed of an Emirati travel ban against its citizens, but the country was aware of the reported blacklist and is following up through diplomatic channels. An employee at Dubai's budget airline, FlyDubai, in Baghdad said the company was taking far fewer visa applications, pending instructions expected next week.

Saeed Mohammed, an agent at Arabian Nights Tours in Dubai, said he frequently faces difficulties obtaining UAE entry visas for Iranians, Turkish citizens and those from Yemen's rebel-held capital due to simmering political tensions. The UAE's recent normalization deal with Israel, which now allows Israelis to visit the emirate's skyscraper-studded cities visa-free, has cast a spotlight on a changing Middle East. Gulf leaders have come to see Israel, a former enemy, as a key ally against the shared threats of Iran and the Muslim Brotherhood.

Despite long-standing visa troubles, Mohammed said he's never seen the 100% visa rejection rate of the past week, with some dozen visitor visas denied each day from Yemen, Iran, Turkey, Afghanistan and other countries.

“We can only assume that there has been some change in the law, but in reality, no one knows," he said.

Mohammad Hosseini, Iran’s Chargé d’Affaires in the UAE, wrote on Twitter Thursday that he's following up with the Emirati Foreign Ministry after hearing the visa ban applies to 13 countries “temporarily and until further notice." A travel agent in Tehran said Iranians hadn’t received visas to enter the UAE since early August.

One travel agent in Istanbul said she wasn't at all surprised by the ban, especially given the UAE's growing trend of rejecting Turkish visas over the past few months — the result of a political rivalry, not the coronavirus, she added.