Canadian Prime Minister Justin Trudeau said Friday he expects more than half of Canadians to receive a COVID-19 vaccine by next September after he came under criticism for saying Canadians won’t be among the first to get doses.

Trudeau said earlier this week Canada will have to wait for a vaccine because the first ones are likely to be given to citizens of the countries they are made in. He noted the United States, the United Kingdom and Germany have mass vaccine-production facilities but Canada does not.

Opposition parties criticized Trudeau for not ensuring Canadians get priority access to vaccines. 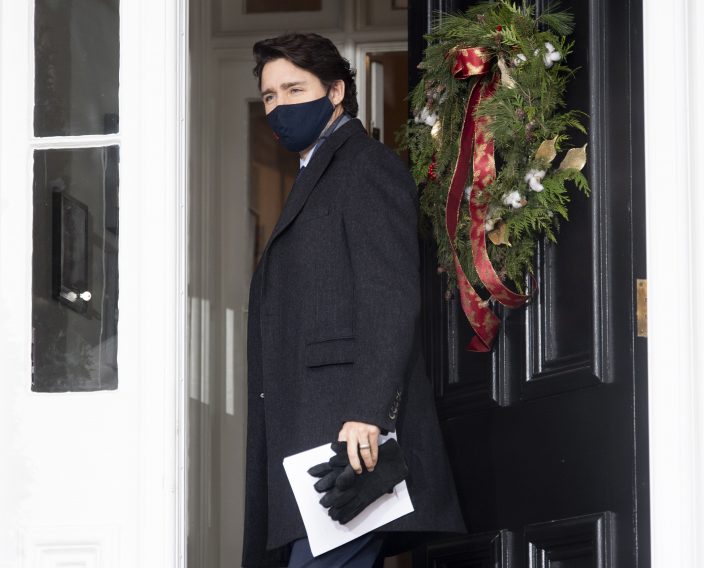 Canadian Prime Minister Justin Trudeau closes the door as he steps out of Rideau cottage for a bi-weekly news conference on the Covid-19 pandemic in Ottawa, Ontario, Friday, Nov. 27, 2020. (Adrian WyldThe Canadian Press via AP)

Trudeau said Friday he expects vaccines to start arriving early next year — but what month Canadians will get the first doses remains an open question.

“I can understand the eagerness, that people want to know when is this going to be over," Trudeau said.

The chief medical adviser at Health Canada said Thursday Pfizer’s COVID-19 vaccine candidate could be approved in Canada next month. The U.S. Food and Drug Administration is meeting Dec. 10 to consider whether to give the go-ahead to Pfizer.

Canada has a purchase deal to buy at least 20 million doses of Pfizer’s vaccine.

Toronto is on lockdown and the country’s largest province of Ontario reported a record 1,855 cases on Friday.

“We’re in for some of the toughest days of this pandemic,” Trudeau said

Trudeau said Canada, which has a population of 37 million, has signed deals that could give Canada the most per capita vaccines in the world. And he said the Canadian military will play a role in distribution of the vaccine. An army general will oversee it.

“This will be the biggest immunization in the history of the country,” Trudeau said.

Dwayne Johnson is a contender in NBC sitcom 'Young ...

Farmers back at protest camp after deep challenge to PM ...

Tens of thousands of farmers who s ...

Ontario asks Biden for a million vaccines amid shortage