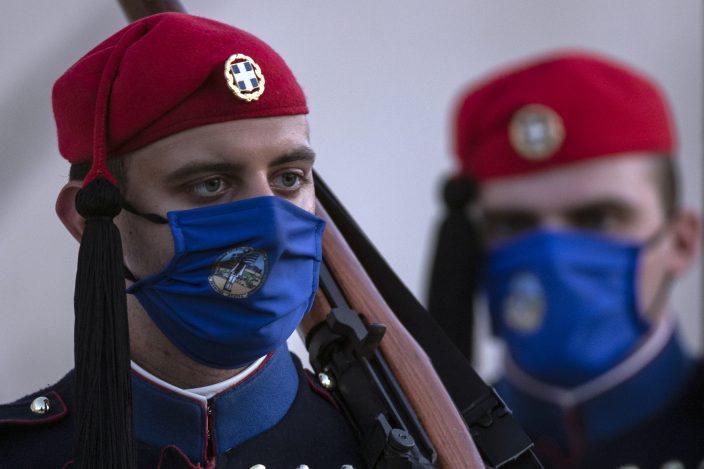 Greek Presidential Guards, wearing a protective masks against the spread of coronavirus, perform during the changing of the guards ceremony, at the tomb of the unknown soldier, in Athens, on Friday, Nov. 27, 2020. Greece's government spokesman on Thursday announced a weeklong extension to the country's current lockdown, due to the continued spread of the COVID-19. (AP PhotoPetros Giannakouris)

US-VIRUS-OUTBREAK — The raging coronavirus pandemic kept crowds thin at malls and stores across the country on Black Friday, but a surge in online shopping offered a small beacon of hope for struggling retailers after months of slumping sales and businesses toppling into bankruptcy. By Anne D’innocenzio, Joseph Pisani and Alexandra Olson. SENT: 1,110 words, photos.

IRAN-NUCLEAR — An Iranian scientist that Israel alleged led the Islamic Republic’s military nuclear program until its disbanding in the early 2000s was killed in a targeted attack that saw gunmen use explosives and machine-gun fire, state television said. Iran’s foreign minister alleged the killing of Mohsen Fakhrizadeh bore “serious indications” of an Israeli role, but did not elaborate. Israel declined to immediately comment. By Jon Gambrell. SENT: 730 words, photos. 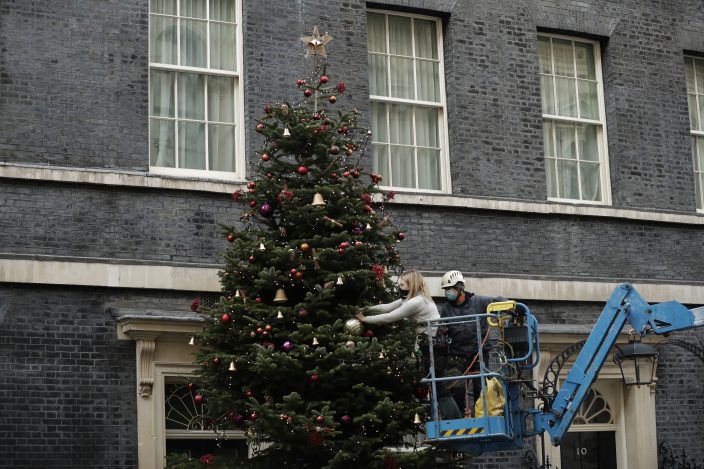 The Downing Street Christmas tree is decorated after being put up outside number 10 in London, during England's second coronavirus outbreak, Friday, Nov. 27, 2020. Most people in England will continue to face tight restrictions on socializing and business after a nationwide lockdown ends next week, with pubs and restaurants ordered to remain shut in areas that are home to more than 20 million people. (AP PhotoMatt Dunham)

TRUMP-ELECTION CHALLENGES-PENNSYLVANIA — President Donald Trump’s legal team suffers yet another defeat in court as a federal appeals court in Philadelphia roundly rejects its latest effort to challenge the state’s election results. Trump’s lawyers vow to appeal to the Supreme Court despite the judge’s assessment that the “campaign’s claims have no merit.” By Maryclaire Dale. SENT: 700 words, photos. WITH: TRUMP-ELECTION CHALLENGES — President Donald Trump still won’t bring himself to concede the election he decisively lost to President-elect Joe Biden. But he’s now acknowledging he will leave the White House if Biden’s win is affirmed by the Electoral College, which is firmly on track to do just that in a few weeks. By Jill Colvin. SENT: 700 words, photos.

FEDERAL EXECUTIONS — The Justice Department is quietly amending its execution protocols, no longer requiring federal death sentences to be carried out by lethal injection and clearing the way for other methods like firing squads and poison gas. By Michael Balsamo. SENT: 680 words.

NKOREA-VIRUS-MEASURES — North Korean leader Kim Jong Un has ordered at least two people executed, banned fishing at sea and locked down the capital, Pyongyang, as part of frantic efforts to guard against the coronavirus and its economic damage, South Korea’s spy agency has told lawmakers. By Hyung-Jin Kim. SENT: 820 words. 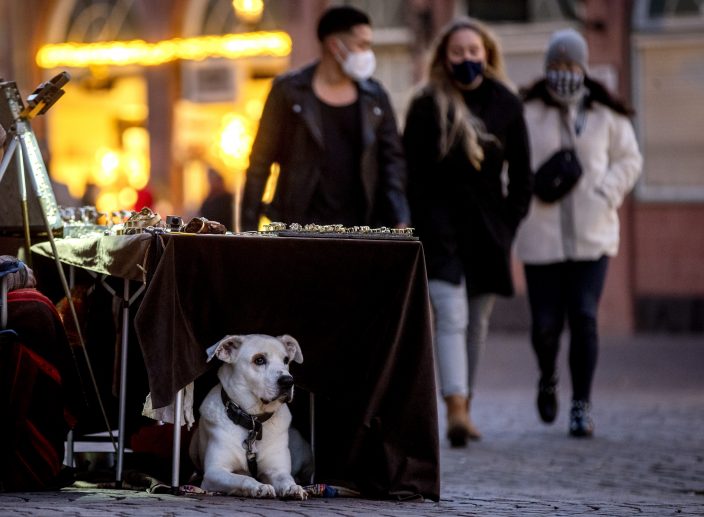 People wear face masks as they walk by a dog the lying under the table of a street vendor in central Frankfurt, Germany, Friday, Nov. 27, 2020. (AP PhotoMichael Probst)

MARADONA-BRAZIL MOURNS — Brazil and Argentina are long rivals for soccer supremacy in South America, and Brazilians naturally think of their own Pelé as the best footballer in history. But they are putting aside the argument to mourn the death of Argentine superstar Diego Maradona. By Mauricio Savarese. SENT: 644 words, photos. WITH: MARADONA-BODY — Three funeral workers have been fired for posing for photos alongside the body of soccer star Diego Maradona shortly before his funeral. SENT: 225 words.

VIRUS-OUTBREAK-LETTERS-TO-SANTA — Letters pouring by the tens of thousands into Santa’s mailbox at a postal sorting office in France offer a glimpse into the worries and hopes of children awaiting a pandemic-hit Christmas. SENT: 800 words, photos. WITH: VIRUS-OUTBREAK-LETTERS-TO-SANTA-EXCERPTS — Excerpts from letters sent to Santa that have been received by his sorting office in France. SENT: 230 words, photo. 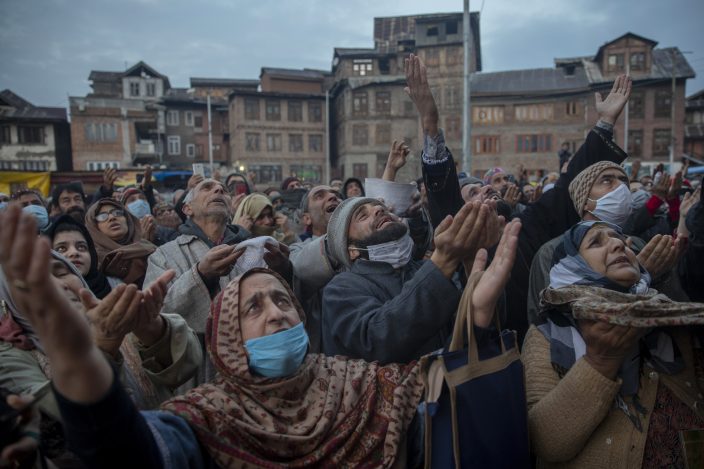 PAKISTAN-LONELIEST-ELEPHANT — Iconic singer and actress Cher is in Pakistan to celebrate the departure of Kaavan, dubbed the “world’s loneliest elephant,” who will soon leave a Pakistani zoo for better conditions after years of lobbying by animal rights groups and activists. By Kathy Gannon. SENT: 630 words, photos. 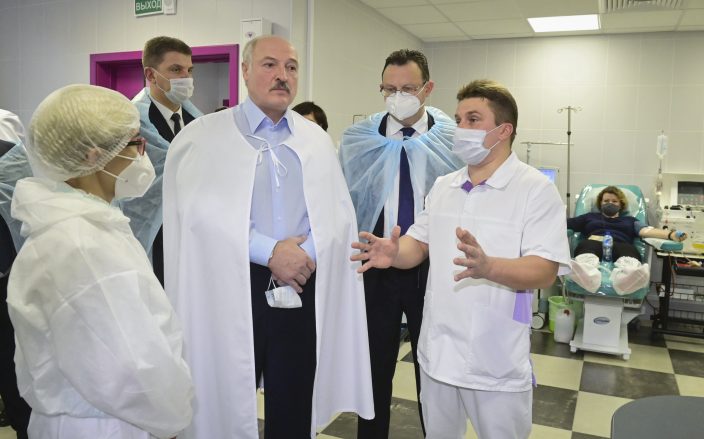 VIRUS-OUTBREAK-CHRISTMAS-TREES — Christmas tree growers who have faced increased interest in artificial trees in recent years say demand for real, fresh-cut evergreens is strong this season. Wholesale growers and small farms alike say customers are showing up earlier than normal and there are more of them. By Gillian Flaccus. SENT: 87O words, photos.

ONE GOOD THING-LIBRARY ON MOTORBIKE — During his leisure time, Mahinda Dasanayaka packs his motorbike with books and rides his mobile library — across mostly muddy roads running through tea-growing mountain areas — to underprivileged children in rural parts of Sri Lanka. SENT: 840 words, photos.

DISNEY PARKS-LAYOFFS — The Walt Disney Co. announced plans to lay off 4,000 more workers in its theme parks division in California and Florida due to the COVID-19 pandemic’s effect on the industry. SENT: 240 words. 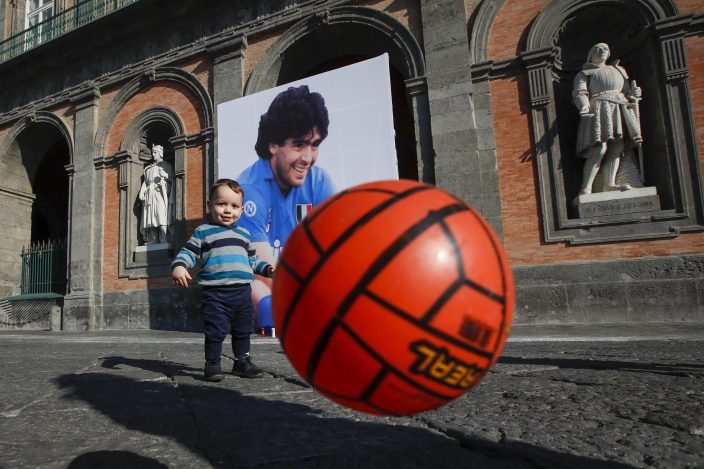 16-months old Andrea Cangiano plays with a ball in front of an image of soccer legend Diego Maradona hanging over the facade of Naples' Royal Palace in the central Piazza Plebiscito, Friday, Nov. 27, 2020. Maradona died on Wednesday at the age of 60 of a heart attack in a house outside Buenos Aires where he recovered from a brain operation. (AP PhotoAlessandra Tarantino)

TAIWAN-PARLIAMENT-PORK FIGHT — Lawmakers in Taiwan got into a fist fight and threw pig guts at each other over a soon-to-be enacted policy that would allow imports of U.S. pork and beef. SENT: 300 words, photos.

VIRUS-OUTBREAK-GERMANY-VACCINE-LOGISTICS — The German government is preparing to roll out a nationwide coronavirus vaccine program as it became the latest country to hit the milestone of 1 million confirmed cases Friday. The efforts involve special freezers capable of keeping one of the leading vaccine candidates colder than Antarctica, building dedicated vaccine centers and finding enough staff to administer the shots. By Frank Jordans and Christoph Noelting. SENT: 990 words, photos.

VIRUS OUTBREAK-BRAZIL — Brazilian President Jair Bolsonaro says he won’t take any working COVID-19 vaccine himself. And he’s dismissing the use of masks to limit the spread of the disease as a “taboo.” By Mauricio Savarese. SENT: 610 words, photos.

VIRUS OUTBREAK-NAVAJO SCHOOLS — On the Navajo Nation, a high school senior spends six hours most days doing homework in a car next to a school bus turned Wi-Fi hotspot. It’s the only way to get assignments to teachers. COVID-19 has brought one of the greatest challenges yet to these young people. Across the Navajo reservation, victims of COVD-19 include parents and grandparents, sole guardians and providers, mentors and teachers. By Anthony J. Wallace. SENT: 2,600 words.

VIRUS OUTBREAK-PERU'S FARMERS — Small farmers in Peru provide a majority of the food that ends up on the South American nation’s dinner tables. But a severe economic contraction has left many peasants bankrupt and uncertain about whether they can keep growing crops. By Franklin Briceno. SENT: 825 words, photos.

GREECE-VIRUS OUTBREAK-CLASS STRUGGLE — An AP photo gallery: In empty classrooms across Greece, teachers are holding online lessons after the government ordered that all tuition, from pre-school through to university, must take place remotely. SENT: 720 words, photos.

ELECTION 2020-RURAL WARNING — Democrat Joe Biden may have produced a winning national formula, but it wasn’t by trimming — or even holding — Donald Trump’s 2016 winning margins in hundreds of counties across the agricultural and industrial north. By Thomas Beaumont. SENT: 1,050 words.

BIDEN-BIG TECH — The Obama-Biden administration was a charmed era for America’s tech companies -- but times have changed. The halcyon days of an adoring Washington are unlikely to return when Joe Biden takes the oath of office in January, with mounting legislative and regulatory challenges to the industry — including stronger enforcement of antitrust laws — nearly certain to outlast the tenure of President Donald Trump. By Business Writer Marcy Gordon. SENT: 900 words, photos.

BIDEN-CLEAN-AIR — Mary Nichols will soon leave her job as California’s top air regulator after more than four decades of advocating for ambitious climate policies and defending them against pushback from Trump. Nichols hopes she can continue that work as the next administrator of the Environmental Protection Agency under the Biden administration, but she's likely to face opposition from Republican senators. SENT: 1,060 words, photos.

TRUMP-MIGRATORY BIRDS — The Trump administration moved forward Friday on gutting a longstanding federal protection for the nation’s birds, over objections from former federal officials and many scientists that billions more birds will likely perish as a result. SENT: 450 words.

VATICAN-NEW-CARDINALS — The Vatican’s Santa Marta hotel was built to sequester cardinals during papal elections. It’s now sequestering soon-to-be cardinals in town for this weekend’s ceremony to get their red hats. By Nicole Winfield And Trisha Thomas. SENT: 840 words, photos.

BREXIT-BICYCLES — With just over a month to go until Britain makes a sharp economic break with the EU, Brompton Bicycles faces uncertainty about supplies and unexpected new competition from China. Brompton is just one of thousands of British companies bracing for huge changes on Jan. 1, when Britain leaves the economic structures of the 27-nation bloc. SENT: 1,000 words, photos.

CHINA-AUSTRALIA-WINE-IMPORTS — China has added wine to the growing list of Australian goods barred from its markets in a trade war against Australia over disputes including its support for an investigation into the origin of the coronavirus. SENT: 450 words.

BELARUS PROTESTS — The president of Belarus said Friday that he would not remain in the post he has held for more than 26 years if his country adopts a new constitution. However, President Alexander Lukashenko did not describe the amendments he is seeking or give a timeline for when a new constitution might be adopted. SENT: 255 words.

EMIRATES-VISA BAN — Travel agencies in countries across the Middle East and Africa say the United Arab Emirates has temporarily halted issuing new visas to their citizens, a so-far unexplained ban on visitors amid both the coronavirus pandemic and the UAE’s normalization deal with Israel. SENT: 940 words.

MEXICO-ETHICAL-GUIDE — Few world leaders talk about morals and ethics as much as Mexican President Andrés Manuel López Obrador, and he has now presented an “Ethical Guide for the Transformation of Mexico.” López Obrador took office two years ago pledging government austerity and an end to corruption. SENT: 220 words.

FINANCIAL MARKETS — The S&P 500 is closing a shortened session at a record high Friday as investors continue to look forward to the distribution of a COVID-19 vaccine and relief for the economy. SENT: 570 words.

BRITAIN-TECH REGULATION — Britain plans to create a new watchdog to police big tech companies including Google and Facebook to counter their market dominance and prevent them from exploiting consumers and small businesses. SENT: 430 words.