Fans of Bad Bunny are used to expecting something different each time he releases new music.

He's done it since his first studio album, 2018's “X 100pre” ("Forever"); then with “Oasis”, his collaboration with J Balvin in 2019, and last February with his award-winning “YHLQMDLG,” a 20-track project which explored love and loss through a combination of trap and reggaetón.

Now he is surprising fans with “El Último Tour del Mundo” ("The Last Tour of the World"), a 16-song collection written during the pandemic and released Friday in which he plays with alternative music, punk, pop and even rock ‘n’ roll. 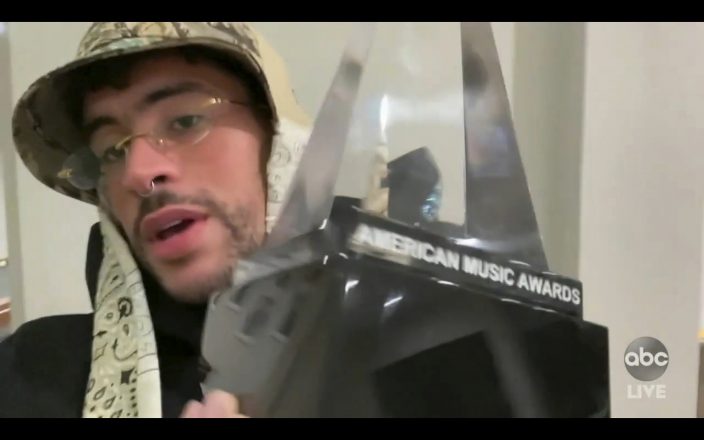 In this screen shot provided by ABC on Sunday, Nov. 22, 2020, Bad Bunny accepts the award for favorite latin album for “YHLQMDLG” at the American Music Awards at the Microsoft Theater in Los Angeles. (ABC via AP)

“I am not a fan of repeating the same formula,” the singer says. “Each album that I've made has it's own identity.”

The album arrives only a few days after Bad Bunny received a Latin Grammy, two American Music Awards and two new Grammy nominations, including for best pop duo/group performance for “Un Día (One Day)” with Balvin, Dua Lipa and Tainy. 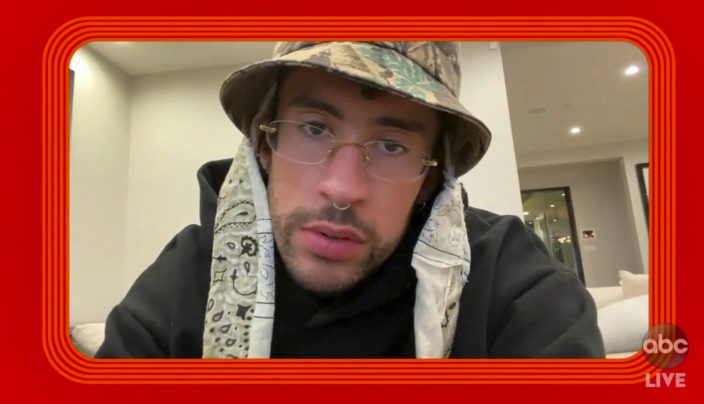 In this screen shot provided by ABC on Sunday, Nov. 22, 2020, Bad Bunny presents the award for favorite latin female artist at the American Music Awards at the Microsoft Theater in Los Angeles. (ABC via AP)

While recovering from COVID-19, the 26 year-old musician, whose real name is Benito Antonio Martínez Ocasio, spoke to The Associated Press from his home in Puerto Rico. Answers have been edited for clarity and brevity.

AP: You had to cancel your planned performance at the American Music Awards after testing positive for the coronavirus. How are you feeling?

Bad Bunny: I am well, thank God. I am feeling better. There were days where I felt a little bad, but I feel that I'm almost totally recovered.

AP: You have plenty of reasons to celebrate: A Latin Grammy, two American Music Awards, two new nominations to the Grammys, a new album. This has been an important week.

Bad Bunny: I am very happy. Many things are happening. Despite being a difficult year for many, myself included, 2020 has also given me many things to be grateful for thanks to the music. We are very happy, enjoying the blessings and the good things that may come.

AP: In “El Último Tour del Mundo” you play with new rhythms and elements. Tell us a bit about this production.

Bad Bunny: I've always said that albums are for making new, different things and to discover yourself as an artist. I am not a fan of repeating the same formula... This new album is meant to be listened while relaxing at home, in your room, in your car, at night with some friends, with a glass (of wine) or a beer. It has many songs that are fun and it has a lot of emotion. It has a lot of me. More than a Bad Bunny album, this is a Benito album.

AP: Besides the mood of your music, how do you feel that the pandemic has affected you as an artist?

Bad Bunny: It forced me to be even more productive because I was alone at home doing nothing. At times I felt like writing songs that had to do with everything that was happening, but at the same time I told myself ‘No’ because I want people to forget reality when they listen to my music. But reality always touches your music: there are a few songs where you can feel that the muse was everything that is going on, like “Antes Que Se Acabe” ("Before It Ends"). That's a very special song that comes from that sensation that the world seems to be coming to an end, but before that happens we need to give love and share with one another.

AP: Would you call it a more introspective album?

Bad Bunny: You could say that, although it also has some songs about heartbreak, which people always love to hear and I do love to write... and other themes like “Maldita Pobreza” ("Damn Poverty"), which is very fun, one of my favorites. It starts with this boy that wants to give everything to a girl and he can’t because he’s poor, and then the song takes a turn and becomes a little social. There’s also “Yo visto así”, which is my story and the story of many people always criticized for the way they dress, and it’s like saying “If you don’t like it, well...” (laughs.)

AP: Why “The Last Tour of the World”?

Bad Bunny: When I released “YHLQMDLG,” this whole quarantine thing started and I wrote most of the songs during those first weeks. The only thing that gave me life was working on the album. At that moment, the images that we were seeing on TV and social media were apocalyptic, like the world was coming to an end. I think that had an influence in the album's title and it doesn't imply that this is going to be my last tour, but the last tour of the world, literally: No one will be able to go on tour. No one. Neither Maluma nor Lady Gaga. It’s like me moving forward a tour from 2032 to 2020, before the world comes to an end.