Missouri and Vanderbilt were supposed to play each other last month, only to have a combination of positive COVID-19 tests and contact tracing force the Southeastern Conference to juggle the schedule.

The juggling continued this week: In the most 2020 combination of events, the Tigers had their game against Arkansas postponed from Saturday to another date for the same reason while Vanderbilt likewise had its game against Tennessee pushed back.

That resulted in the chance for the Tigers and Commodores to finally take the field against each other. 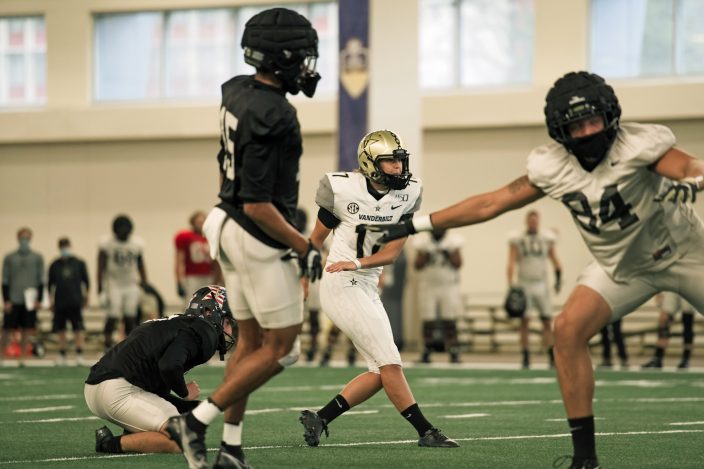 In this image provided by Vanderbilt Athletics, Vanderbilt kicker Sarah Fuller watches a kick during NCAA college football practice, Wednesday, Nov. 25, 2020, in Nashville, Tenn. Fuller, a goalkeeper on the Commodores' women's soccer team, will don a football uniform on Vanderbilt's sideline and she is poised to become the first woman to play in a Power 5 game when the Commodores take on Missouri. (Vanderbilt Athletics via AP)

“I thank the SEC for finding us an opponent,” said Missouri coach Eli Drinkwitz, who had been planning to make up the game against the Commodores on Dec. 12. “Obviously not ideal to have to switch late. We were pretty much done with our game plan for the other team that we were going to play."

It's not the first time Drinkwitz has had to make an abrupt change in course during his first season in Columbia.

Missouri (3-3) moved its game against LSU from Baton Rouge to Faurot Field because of Hurricane Delta. Then came the changes due to COVID-19: The original Vanderbilt game was postponed, games with Florida and Kentucky had their weekends flip-flopped and the Tigers' game against Georgia was soon postponed.

Vanderbilt coach Derek Mason said he banked about a day and a half of Missouri prep in October before their game became the first in the SEC to be postponed, which should come in handy during a week already interrupted by Thanksgiving.

“Twenty-four hours ago, I was getting ready for rivalry week and we quickly flip the script,” Mason said. "In any other year it would probably be one of those things where you feel like the sky is falling. But in 2020, it’s normal.”

Still, it's hardly ideal circumstances as the Commodores (0-7) chase their first win of the season.

“I think at this point anything is possible and you have to be ready for all sorts of different things to happen," Vanderbilt offensive lineman Drew Birchmeier said. "You just have to go with the flow. Especially this year.”

No woman has ever kicked in a Power Five football game, though that could change Saturday. Sarah Fuller, the goalkeeper who made three saves in helping Vanderbilt win the SEC women’s soccer tournament championship last weekend, will dress Saturday, with contact tracing limiting the Commodores’ available specialists. Vanderbilt is just 3 of 7 on field goals this season. Only two women have kicked at the FBS level.

Not only is Vanderbilt starting a freshman quarterback in Ken Seals, he has plenty of company as one of four freshmen and 18 Commodores making their first start this season. Vanderbilt is tied with Arkansas for the most first-time starters, trailing only Florida State and Mississippi State — who’ve both played 19 — for most among power conference programs.

Seals has had three straight 300-yard passing games, and he leads all true freshmen in that category this season. He is fourth among all FBS freshmen with 1,610 yards passing. Seals threw for 319 yards in a 38-17 loss to sixth-ranked Florida last weekend, giving him the school passing record for freshmen.

Vanderbilt running back Keyon Henry-Brooks did not play against the Gators. He’s still listed atop the two-deep chart, and the Commodores certainly need him. The sophomore ranks second in the SEC with 147.2 all-purpose yards per game. He also ranks fourth in the SEC with 93.5 yards rushing per game. He’s topped 100 yards twice this season.

Missouri turned in a roster with just 59 scholarship players this week, though that is actually an improvement over the 52 the Tigers had last week against South Carolina. They had 11 players out against the Gamecocks because of COVID-19 reasons, below the league's 53-man roster threshold, but chose to play despite the numbers. They won 17-10.