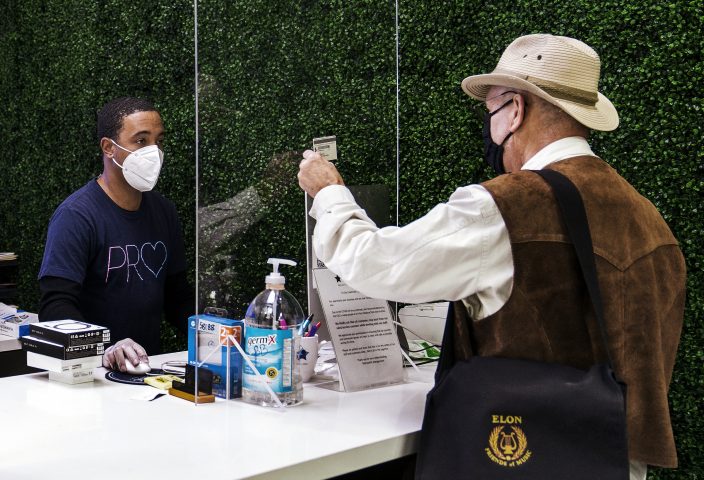 Melrose Mac Service coordinator, Josh Smart, left, helps out customer Eric Hall, Monster Lighting general manager, to make a contact-less purchase through a plexiglass wall at the store in Burbank, Calif., Friday, Nov. 27, 2020. Los Angeles County has announced a new stay-home order as coronavirus cases surge out of control in the nation's most populous county. The three-3 week order take effect Monday, Nov. 30, 2020. The order advises residents to stay home "as much as possible" and to wear a face covering when they go out. (AP PhotoDamian Dovarganes)

VIRUS OUTBREAK-US SURGE — The coronavirus testing numbers that have guided much of the nation’s response to the pandemic are likely to be erratic over the next week or so as fewer people get tested during the Thanksgiving holiday weekend and testing sites observe shorter hours, experts say. The result could be potential dips in reported infections that offer the illusion that the spread of the virus is easing when, in fact, the numbers say little about where the nation stands in fighting COVID-19. By Daniella Peters. SENT: 590 words, photos.

VIRUS-OUTBREAK-CALIFORNIA —Los Angeles County has announced a new stay-home order as coronavirus cases surged out of control in the nation’s most populous county, banning most gatherings but stopping short of a full shutdown on retail stores and other non-essential businesses. The three-week order comes as the county of 10 million residents confirmed 24 new deaths and 4,544 new confirmed cases of COVID-19. By Brian Melley. SENT: 680 words, photos. 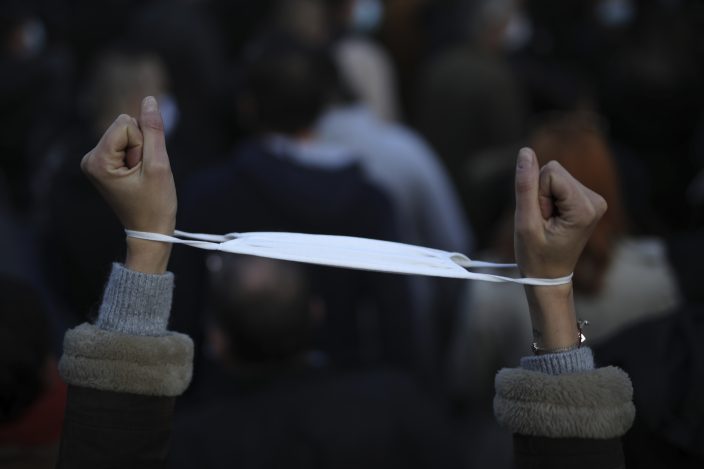 A demonstrator has her mask around her wrists as restaurants, bars and night clubs owners protest in Marseille, France, Thursday, Nov. 26, 2020. The government laid out details Thursday of a gradual easing of France's monthlong virus lockdown, including hundreds of millions of euros in new aid for struggling workers and students and businesses forced to close. (AP PhotoDaniel Cole)

TRUMP-ELECTION-CHALLENGES-PENNSYLVANIA — President Donald Trump’s legal team has suffered yet another defeat in court as a federal appeals court in Philadelphia roundly rejected the campaign’s latest effort to challenge the state’s election results. Trump’s lawyers vowed to appeal to the Supreme Court despite the judges’ assessment that the “campaign’s claims have no merit.” By Maryclaire Dale. SENT: 780 words, photos. WITH: WISCONSIN-RECOUNT —Milwaukee County has completed its recount of presidential ballots, finding only small changes in vote totals for one of the two Wisconsin counties recounting ballots, but Trump’s attorneys appear ready for a legal challenge seeking to toss tens of thousands of ballots. President-elect Joe Biden’s lead increased by 132 votes after county election officials recounted over 450,000 votes. SENT: 480 words.

SENATE-GEORGIA-PANDEMIC — Two starkly different worlds are on display in Georgia, where the national political spotlight is on twin Senate runoffs that will determine which party controls the chamber to open Biden’s administration. For Republicans, the pandemic is secondary in a runoff blitz defined by dire warnings about what it would mean to the country if their candidates lose. Democrats are more than eager to talk about COVID-19 and its economic fallout. By Bill Barrow. SENT: 950 words, photos.

VENEZUELA-JAILED-US-OIL-EXECUTIVES — The family of a Houston-based Citgo oil executive convicted and ordered to prison in Venezuela alongside five others has appealed directly to President Nicolás Maduro for mercy. In an open letter, relatives of José Pereira, 63, wrote to Maduro that he has a long list of health problems that need medical attention. By Scott Smith. SENT: 550 words, photos. 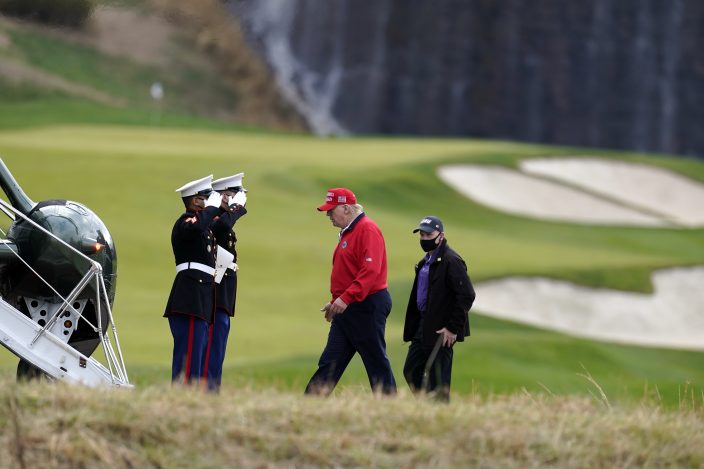 IRAN-NUCLEAR — Authorities say an Iranian scientist named by the West as the leader of the Islamic Republic’s disbanded military nuclear program has been killed in an ambush on the outskirts of Tehran. Iran’s foreign minister alleged the killing of Mohsen Fakhrizadeh bore “serious indications” of an Israeli role, but did not elaborate. Hours after the attack, the Pentagon announced it already had brought the USS Nimitz aircraft carrier back into the Middle East, an unusual move as the carrier already spent months in the region. By Jon Gambrell. SENT: 1,000 words, photos, developing. 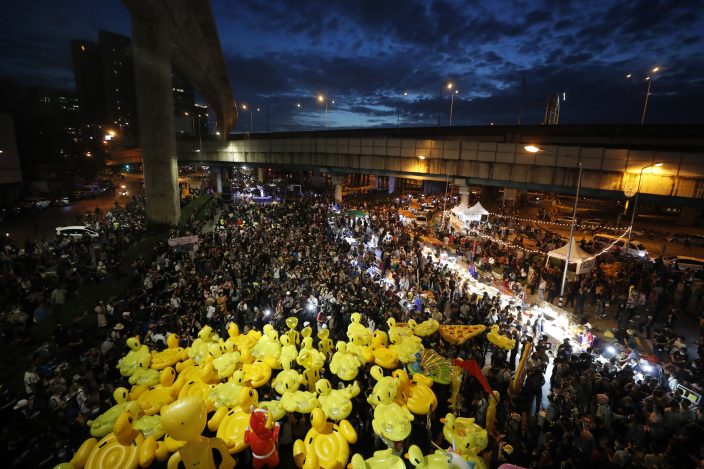 Inflatable yellow ducks, which have become good-humored symbols of resistance during anti-government rallies, are lifted over a crowd of protesters Friday, Nov. 27, 2020 in Bangkok, Thailand. Pro-democracy demonstrators are continuing their calls for the government to step down and reforms to the constitution and the monarchy. (AP PhotoSakchai Lalit)

US-VIRUS-OUTBREAK-MICHIGAN — A Big Boy restaurant in Michigan’s Thumb region has lost its name after the owners refused to stop indoor dining as part of statewide restrictions to slow the spread of the coronavirus. Customers were greeted with Sandusky Diner instead of Sandusky Big Boy, the name for 35 years. SENT: 470 words. 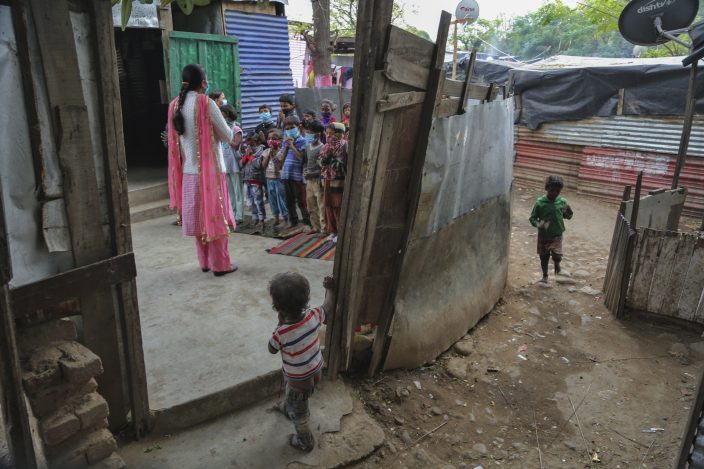 Children wearing face masks as a precaution against the coronavirus participate in morning prayer at the Sangharsh Vidya Kendra school at a slum area on the outskirts of Jammu, India, Wednesday, Nov.25, 2020. The school provides free education to underprivileged children two days a week. (AP PhotoChanni Anand)

US-OBIT-TONY-HSIEH — Tony Hsieh, retired CEO of Las Vegas-based online shoe retailer Zappos.com, has died, according to a statement from DTP Companies, which he founded. SENT: 140 words.

EL-SALVADOR-RAIDS —The Central American countries of El Salvador, Guatemala and Honduras have rounded up hundreds of suspected street gang members as part of a U.S.-backed effort known as “Operation Regional Shield.” SENT: 130 words.

CUBA-ARTIST PROTEST — Cuban authorities have cleared more than a dozen artists and activists from a home they have used as a center for anti-government protests that have gained unusually wide attention. SENT: 550 words. 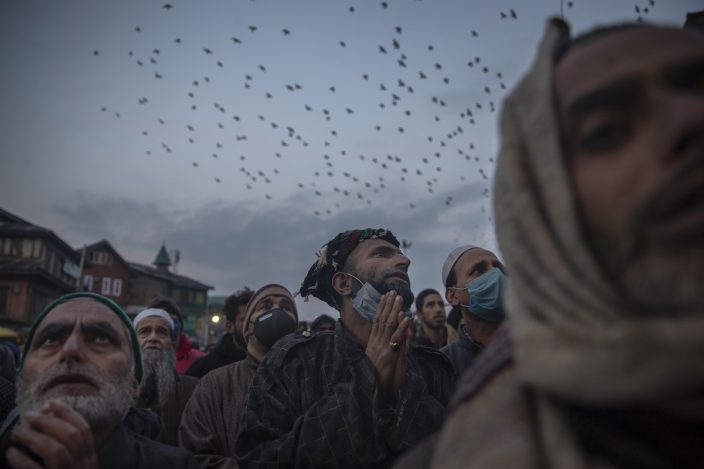 US-WHALE-SHARK-DIES-GEORGIA-AQUARIUM — The largest female whale shark at the Georgia Aquarium in Atlanta has died. Trixie had been at the aquarium since 2006. SENT: 250 words. 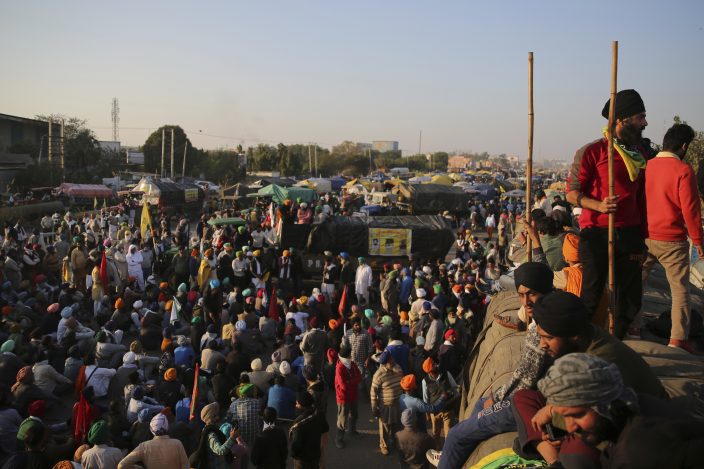 Protesting farmers jam a highway as they attempt to move towards Delhi, at the border between Delhi and Haryana state, Friday, Nov. 27, 2020. Thousands of agitating farmers in India faced tear gas and baton charge from police on Friday after they resumed their march to the capital against new farming laws that they fear will give more power to corporations and reduce their earnings. While trying to march towards New Delhi, the farmers, using their tractors, cleared concrete blockades, walls of shipping containers and horizontally parked trucks after police had set them up as barricades and dug trenches on highways to block roads leading to the capital. (AP PhotoAltaf Qadri)

US-MED-VIRUS-OUTBREAK-VACCINE — A panel of U.S. advisers will meet to vote on how scarce, initial supplies of a coronavirus vaccine will be given out once one has been approved. Experts have proposed giving the vaccine to health workers first. High priority also may be given to workers in essential industries, people with certain medical conditions and people age 65 and older. SENT: 180 words, photos.

US-VIRUS-OUTBREAK —The raging coronavirus pandemic kept crowds thin at malls and stores across the country on Black Friday, but a surge in online shopping offered a beacon of hope for struggling retailers after months of slumping sales and businesses toppling into bankruptcy. By Retail Writers Alexandra Olson, Anne D’innocenzio and Joseph Pisani. SENT: 1,150 words, photos, video.

SUPREME-COURT-CORONAVIRUS-RESTRICTIONS-DIMARZIO —The longtime head of the Roman Catholic Church in Brooklyn says a ruling by the Supreme Court that barred New York from enforcing certain restrictions on religious services in areas hit hard by the coronavirus is a “good decision” that guarantees constitutional protections for the free exercise of religion. SENT: 930 words, photo. WITH: US-SUPREME-COURT-LOUISIANA-PASTOR — The Supreme Court is for now staying out of a dispute involving the state of Louisiana and a Baton Rouge-area pastor charged with violating state coronavirus restrictions by repeatedly holding large church services. SENT: 110 words, photo.

VIRUS OUTBREAK-ASIA — South Korea has reported more than 500 new coronavirus cases for the third straight day, the speed of viral spread unseen since the worst wave of the outbreak in spring. SENT: 340 words, photos. WITH: VIRUS-OUTBREAK-THE-LATEST — Illinois has risen above 12,000 deaths from COVID-19, while also surpassing the 700,000 mark for confirmed coronavirus infections. The latest 1,000 deaths were recorded in just nine days — matching the state’s deadliest period previously in the pandemic in late April and early May, according to an Associated Press review of the data. SENT: 1,330 words, photos, developing.

BIDEN-GUANTANAMO — Biden has said little about the Guantanamo Bay detention center except that he supports closing it. That has brought a degree of hope to some of the 41 men still held there. By Ben Fox. SENT: 1,070 words, photos.

THAILAND-PROTESTS — Pro-democracy demonstrators rallied again in Thailand, undeterred by arrest warrants and threats of violent attacks. There’s concern that if the government feels it cannot control the protests, it may impose martial law or be ousted by the army in a coup. SENT: 690 words, photos.

INDIA-FARMER-PROTESTS — India’s government has invited leaders of farmers for talks as thousands of them pressed on with a protest in and around the capital against agricultural legislation they said could be exploited by the private sector to buy their crops at cheap prices. SENT: 350 words, photos.

US-MALL-SHOOTING — Police say a shooting at a Sacramento mall on Black Friday has killed one person and left another with life-threatening wounds. SENT: 240 words, photos.

US-JEOPARDY-JENNINGS — “Jeopardy!” record-holder Ken Jennings will be the first in a series of interim hosts replacing Alex Trebek when the show resumes production next Monday. SENT: 200 words, photos.

TYSON-JONES PREVIEW — Mike Tyson and Roy Jones Jr. are older, wiser, calmer men than the young athletes who once dominated their sport, and their extraordinary return to the ring should reflect it. By Sports Writer Greg Beacham. SENT: 1,000 words, photos.

VENEZUELA-BASEBALL-SEASON — Venezuela’s storied baseball season has kicked off — and an economic crisis and global pandemic will make it one for the record books. Stadiums that have long been a temporary escape from the South American country’s mounting poverty and political turmoil were empty as players took their spots on the field. No fans were allowed. Players and coaches will have to undergo weekly testing to stay on the roster. SENT: 490 words.

$640 million Powerball drawing up next as big jackpots ...