President Donald Trump's attempt to exclude people living in the country illegally from the population count used to divvy up congressional seats is headed for a post-Thanksgiving Supreme Court showdown.

The administration's top lawyers are hoping the justices on a court that includes three Trump appointees will embrace the idea, rejected repeatedly by lower courts. It's the latest, and likely the last, Trump administration hard-line approach to immigration issues to reach the high court. Arguments will take place on Monday by telephone because of the coronavirus pandemic.

Even as the justices weigh a bid to remove, for the first time, millions of noncitizens from the population count that determines how many seats each state gets in the House of Representatives as well as the allocation of some federal funding, experts say other issues loom large for the 2020 census as it heads into unchartered territory over deadlines, data quality and politics. 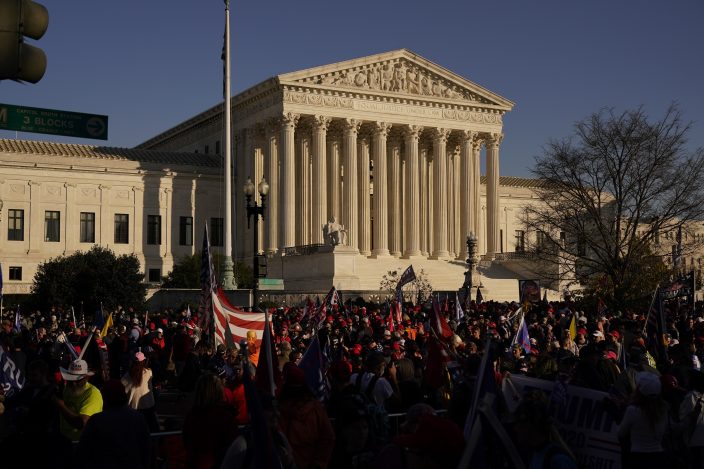 FILE - In this Nov. 14., 2020, file photo supporters of President Donald Trump attend pro-Trump marches outside the Supreme Court Building in Washington. The Supreme Court is hearing arguments over whether the Trump administration can exclude people in the country illegally from the count used for divvying up congressional seats. (AP PhotoJacquelyn Martin, File)

A host of novel questions outside of the court's eventual decision could determine the final product of the nation’s once-a-decade head count, including whether the incoming Biden administration would do anything to try to reverse decisions made under Trump.

Among other questions: Will the Census Bureau be able to meet a year-end deadline for turning in the numbers used for apportionment, the process of dividing up congressional seats among the states? Will the quality of the census data be hurt by a shortened schedule, a pandemic and natural disasters? Could a Democratic-controlled House reject the numbers from the Republican administration if House leaders believe they are flawed? Will a lame-duck Senate pass legislation that could extend deadlines for turning in census numbers?

“There are so many moving parts, it makes your head spin,” said Margo Anderson, a history professor at the University of Wisconsin-Milwaukee.

How the Supreme Court will rule is the first unknown.

Federal courts in California, Maryland and New York have ruled that Trump's plan violates federal law or the Constitution, which provides that "representatives shall be apportioned among the several States according to their respective numbers, counting the whole number of persons in each State.” A fourth court, in Washington, D.C., held this past week that a similar challenge to the administration plan was premature, an argument that also has been made to the high court.

“What Trump wants to do would be a radical break from that. The losers wouldn’t be individual people. It would be entire states and communities that would lose representation when undocumented members of those communities get cut out of the count used to apportion the House,” said Dale Ho, the American Civil Liberties Union lawyer who will argue on behalf of immigration advocates and civil rights groups in the Supreme Court case.

The administration argues that both the Constitution and federal law allow the president to exclude “illegal aliens” from the apportionment count.

“As history, precedent, and structure indicate, the President need not treat all illegal aliens as ‘inhabitants’ of the States and thereby allow their defiance of federal law to distort the allocation of the people’s Representatives,” acting Solicitor General Jeffrey Wall wrote.

The Democratic-controlled House has weighed in to argue that Trump’s plan would result in an unfair distribution of seats for partisan political goals, the latest attempt “to manipulate the census in novel and troubling ways.” The House cast the president’s plan as part of a larger effort that included an attempt blocked by the Supreme Court to add a citizenship question to the census for the first time in 70 years.

For the order to be carried out, the data processing of the apportionment numbers will have to take place while Trump is still in office, but an announcement this month that anomalies have been found in the data jeopardizes the Census Bureau's ability to hand in the numbers to the president by a Dec. 31 deadline. Trump, in turn, is supposed to transmit the numbers to Congress by Jan. 10.

But if problems with the data force a delay of even three weeks, the Census Bureau would be turning in the numbers to a new president. President-elect Joe Biden takes office on Jan. 20.

“The Biden administration will have to see what kind of damage the Trump administration left reapportionment and determine whether an accurate head count, including all persons regardless of citizenship, can be used,” said Jeffrey Wice, an adjunct professor at New York Law School who is an expert in census law and redistricting.

A spokesman for the Biden campaign didn't respond to an email inquiry.

Even if everything is done on time, the House, which will remain under Democratic control next year, might reject the apportionment numbers on the grounds that they aren't what Congress asked the Republican administration to provide, said Justin Levitt, a professor at Loyola Law School in Los Angeles.

The Census Bureau's announcement about anomalies also underscores pandemic-related worries about the quality of the data. The time allotted for correcting errors and filling in gaps in data collection was cut in half by the administration's decision to stick to the year-end deadline and accommodate Trump's apportionment order. The Census Bureau also faced difficulties stemming from wildfires in the West and hurricanes along the Gulf Coast.

There's still a chance the Senate could quell some concerns by agreeing with the House on an extension for turning over the population numbers. As the coronavirus was spreading in the spring, the Census Bureau asked Congress for an extension until the end of April 2021. The House complied, but the legislation went nowhere in the Republican-controlled Senate after Trump issued his apportionment order in July.

It's not out of the question that the Senate still could pass an extension, if either the Supreme Court rejects Trump's plan or Democrats take control of the Senate after two runoff elections in Georgia in January.

One thing seems likely: The current court case won't be the last legal fight over the 2020 census. Final apportionment numbers have been litigated frequently in past decades.

“What would a census be without a lot of litigation?” said Terri Ann Lowenthal, a former congressional aide who specializes in census issues.