From the get-go, President Donald Trump has miscast or exaggerated the military's role in his administration's crash program to accelerate the development, production and eventual distribution of COVID-19 vaccines.

The military theme originated in the May 15 announcement of the creation of Operation Warp Speed. Speaking from the Rose Garden, Trump likened the effort to the Manhattan Project, the military's successful World War II program to engineer and build in secret the world's first atomic bombs.

“That means the full power and strength of the military,” Trump said, referring to the project as a partnership that would combine the full resources of the Pentagon and the Health and Human Services Department. He added: “We have the mightiest military in the long history of humankind." 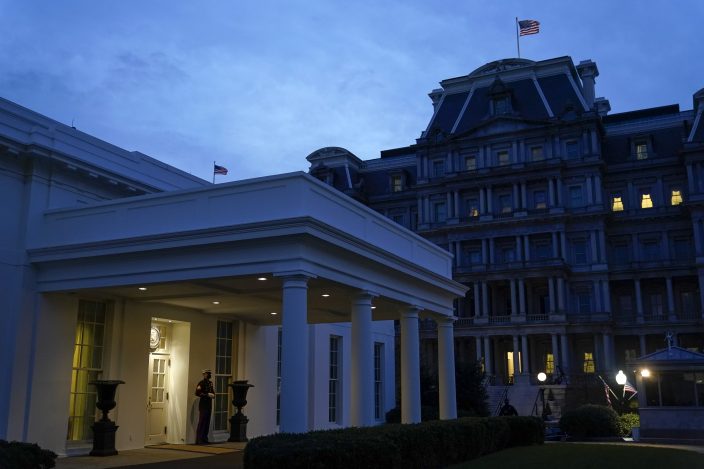 FILE - In this Nov. 25, 2020, file photo a Marine stands outside the entrance to the West Wing of the White House, signifying that President Donald Trump is in the Oval Office in Washington. (AP PhotoPatrick Semansky, File)

Indeed, the military has contributed mightily to the project. It has provided a range of assistance in the form of planning, program management, logistics expertise and other efforts. The accelerated work on COVID-19 vaccines also has benefitted from past investments by the Pentagon's Defense Advanced Research Projects Agency in science and technologies related to infectious diseases.

Army Gen. Gustave Perna was plucked from his job as commander of Army Materiel Command to be the chief operating officer of Operation Warp Speed, and he, too, initially gave the effort a military spin.

“This mission is about defeating the enemy," Perna said at the Rose Garden announcement with Trump. “We will defeat the enemy.” 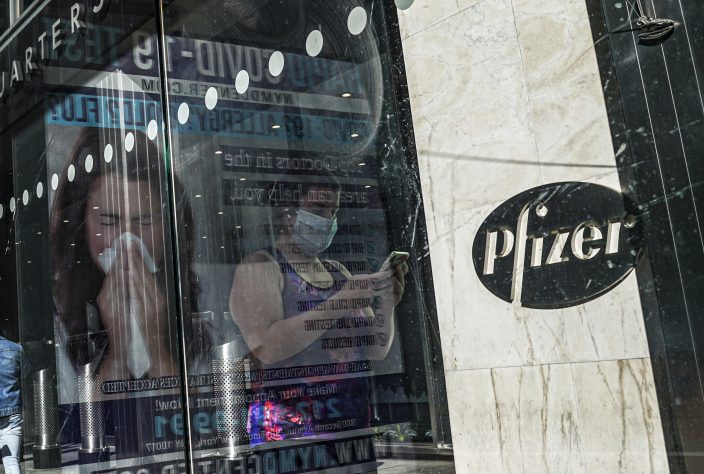 FILE - In this Nov. 9, 2020, an ad for COVID-19 testing reflects on glass at a bus stop, as pedestrians walk past Pfizer world headquarters in New York. (AP PhotoBebeto Matthews, File)

But it has been Trump, not Perna, who has miscast the military's role. Trump said in his initial announcement the military would “deploy every plane, truck and soldier required" to distribute a vaccine when ready.

Within months he was stating even more explicitly — and still incorrectly — that the military would do delivery.

“Our military is doing the distribution — it’s called logistics,” he said in a video posted to Twitter on Oct. 7.

Two weeks later, at his debate with Democrat Joe Biden, now the president-elect, Trump said, “We have Operation Warp Speed, which is the military is going to distribute the vaccine.”

In fact, the military will not distribute the vaccine, although state governors have the power to use members of their National Guard for any number of tasks supporting public safety, including to help with vaccine logistics if deemed necessary.

“There will not be this vision that some people have that there will be Army trucks driving through the streets delivering vaccine,” Perna said Oct. 27.

The Centers for Disease Control and Prevention, not the military, is in charge of the distribution effort, which is based on plans drawn up by each state and other jurisdictions. The distribution will be executed by private companies including McKesson Corp., a health care company that has extensive experience in the distribution of flu vaccines. McKesson also will distribute supplies needed to administer the shots.

Nor will the military produce, store or administer the vaccines. The Pentagon has been saying for months that it would only get involved in vaccine distribution in the event that commercial distributors were unable to reach a remote area of the country.

“The federal military will not be involved in moving any doses or injecting any vaccines,” Paul Mango, the deputy chief of staff for policy at Health and Human Services, said Oct. 24.

The Pentagon has pointedly disputed suggestions that it intends to be delivering vaccines, saying instead that any involvement would be by exception, such as a case in which normal commercial delivery services could not reach a delivery point. Thus far, no such exception has been identified, the Pentagon said this past week.

In addition to Perna, the senior leadership of Operation Warp Speed includes a retired Army colonel, Matthew Hepburn, who serves as the lead official on vaccine development. He is a medical doctor, a biomedical engineer and a former director of medical preparedness on the White House national security staff.

The prominence of military officials in Operation Warp Speed has drawn scrutiny on Capitol Hill, where some have questioned whether an outsize military leadership role would marginalize public health agencies. In October, Democratic Sens. Elizabeth Warren of Massachusetts and Mazie Hirono of Hawaii called for a public Senate Armed Services Committee hearing on the military's participation in the effort, but no such hearing has been held.