Liverpool conceded a goal from a penalty in the third minute of stoppage time to draw 1-1 at Brighton in the Premier League on Saturday.

Diogo Jota’s eighth goal in his last eight games for Liverpool looked like it would be leading the champions to victory at the Amex Stadium, only for Andrew Robertson to kick the outstretched foot of Brighton forward Danny Welbeck seconds into added-on time.

The penalty was awarded only after the referee checked the incident on the pitchside monitor and Pascal Gross converted Brighton’s second spot kick of the game, after one was missed by Neal Maupay in the first half. 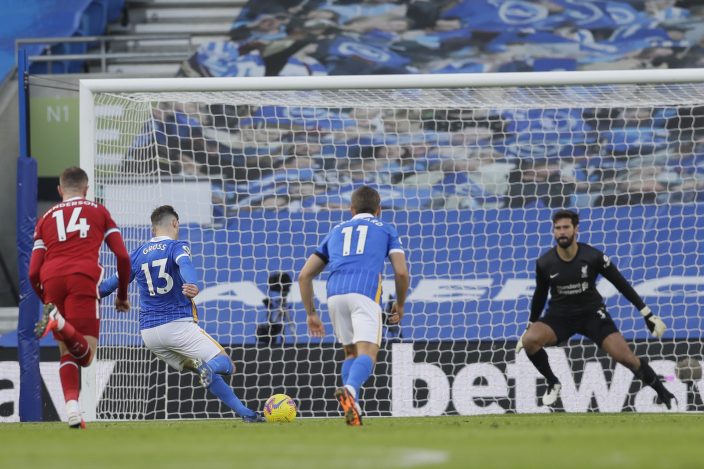 Brighton's Pascal Gross, second from left, scores the equalizer on a penalty kick during the English Premier League soccer match between Brighton and Hove Albion and Liverpool at the Amex stadium in Brighton, England, Saturday, Nov. 28, 2020. (AP PhotoKirsty Wiglesworth, Pool)

Liverpool manager Jurgen Klopp showed his disgust at the decision by sarcastically applauding the assistant referee after Gross scored. Klopp then spoke to officials coming off the field after the game.

On a day when Liverpool lost another player — James Milner — to injury, Jota continued the brilliant start to his career at the club since his move from Wolverhampton by taking on a short pass from Mohamed Salah, cutting across the area and shooting low into the corner in the 60th minute.

The draw ensured Liverpool will finish Saturday back on top of the standings, with Tottenham able to reclaim first place by avoiding defeat at Chelsea on Sunday. 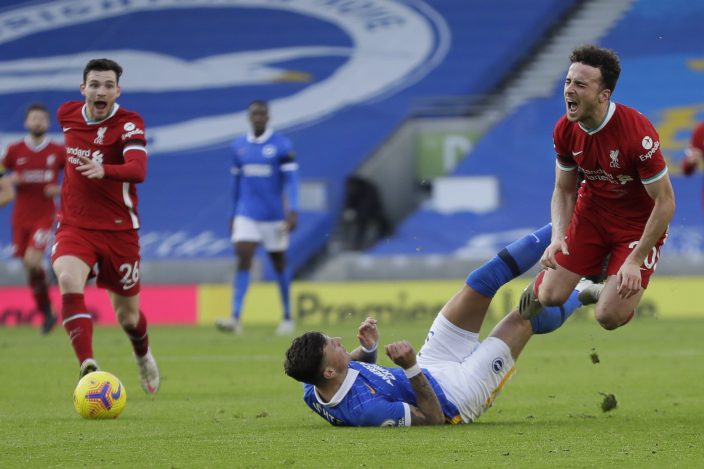 Liverpool had two goals disallowed by VAR, a first-half effort by Salah after he was played through by Roberto Firmino — the replay put the Egypt forward millimeters offside — and a header by substitute Sadio Mane that proved to be a much clearer offside.

Brighton will have its own regrets, with Maupay missing a penalty in the 20th minute before going off with a suspected hamstring injury moments later. Milner and Adam Lallana — a former Liverpool player now at Brighton — also went off injured, adding to the increasing number of muscle problems being picked up in a packed schedule.

Klopp ended up playing three players at right back in the match. Neco Williams, who gave away the penalty for a foul on Aaron Connolly, started there but was substituted at halftime and replaced in the full-back role by Milner.

Milner’s injury meant Curtis Jones came on to play there for the final minutes.

Dwayne Johnson is a contender in NBC sitcom 'Young ...

Farmers back at protest camp after deep challenge to PM ...

Tens of thousands of farmers who s ...