C.J. Marable ran for 157 yards and three touchdowns and No. 16 Coastal Carolina wrapped up the Sun Belt Conference East Division title with a 49-14 victory over Texas State on Saturday.

The Chanticleers (9-0, 7-0) had 572 yards of offense in extending their winning streak to 10 games. They moved up to the Football Bowl Subdivision three seasons ago.

Texas State (2-10, 2-6) closed its sixth straight losing season. It was the second-most points the Bobcats have allowed in regulation this season. 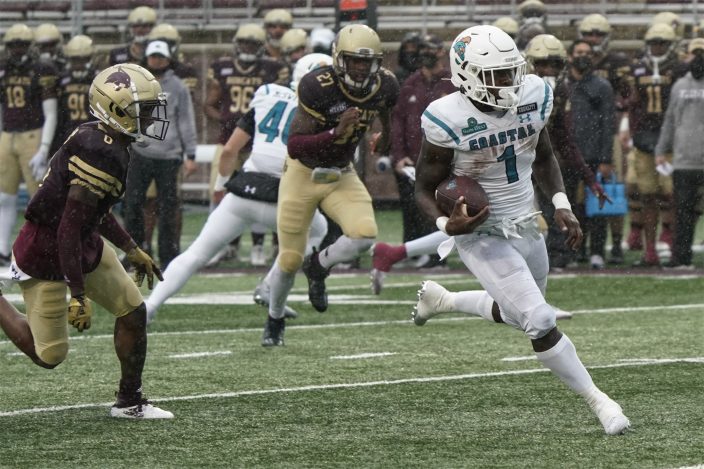 Coastal Carolina's CJ Marable (1) runs for a touchdown against Texas State during the second half of an NCAA college football game in San Marcos, Texas, Saturday, Nov. 28, 2020. (AP PhotoChuck Burton)

Texas State held a moment of silence for sophomore defensive back Khambrail Winters, who was fatally shot Tuesday what the San Marcos Police Department said was a drug deal gone wrong.

Coastal took command early at Bobcat Stadium, scoring touchdowns on its first two possessions route to a 35-7 lead at the half.

The Chants drove 81 yards on their opening possession for the game’s first touchdown. Marable had five rushes for 67 yards in the seven-play drive, including a 14-yard scoring run 1:14 into the game.

The senior running back followed that with a 9-yard scoring run on Coastal’s second possession. The 45-yard drive was set up when Chants junior safety Alex Spillum forced and recovered a fumble. It was Texas State’s fourth fumble of the season.

Marable added a 23-yeard scoring run two minutes into the third quarter. He closed with 16 carries, averaging 9.8 yards per attempt.

The Chants rushed for 406 yards and five touchdowns.

Texas State’s lone touchdown in the first half came on a 14-yard pass from Brady McBride to Javen Banks with 4:33 remaining in the first quarter. The 77-yard drive cut the Chants’ lead to 14-7 at the time.

McBride, the Sun Belt’s reigning Offensive Player of the Week, completed 20 of 26 passes for 202 yards and a touchdown.

The Bobcats were held to 318 yards, including just 116 yards rushing on 24 carries.

Texas State: The Bobcats have finished above .500 just once in their last nine seasons. They have three two-win seasons in the past five years and are 5-19 in two seasons under Jake Spavital, who signed a five-year contract with the school in 2018. Texas State was 7-28 in three seasons under previous head coach Everett Withers before his dismissal.

Coastal Carolina: With a conference title secure, the Chants will focus on closing out a perfect regular season and trying to improve their bowl opportunities. Coastal has scored 40-plus points in four games this season.

Coastal dropped one spot in the AP Top 25 this week after needing a second-half rally to beat Appalachian State 34-23. As dominant as Saturday’s victory was, it did come against an overmatched Texas State team that was concluding a dismal season.

Juvenile lifer locked up for nearly 50 years could go f ...