Cambodian officials say a family of six and another man tested positive for the coronavirus in a rare case of local infection, and Prime Minister Hun Sen expressed concern that the woman believed to be the source had traveled extensively in the country, including the capital.

The 56-year-old woman's husband works at the Interior Ministry in charge of prisons. Hun Sen, who himself just emerged from isolation after he was exposed to the infected Hungarian foreign minister, said his three Cabinet ministers will get tested and self-quarantine.

The Health Ministry said in a statement that the woman tested positive three days after becoming feverish. She had been traveling between Siam Reap and Phnom Penh. 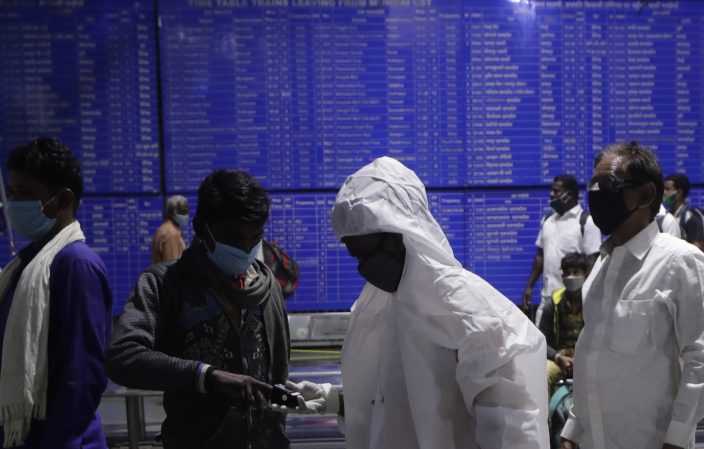 Hun Sen also ordered the temporary shutdown of a mall in Phnom Penh, which the woman visited last week.

Cambodia has had 315 confirmed cases, most of them acquired abroad. 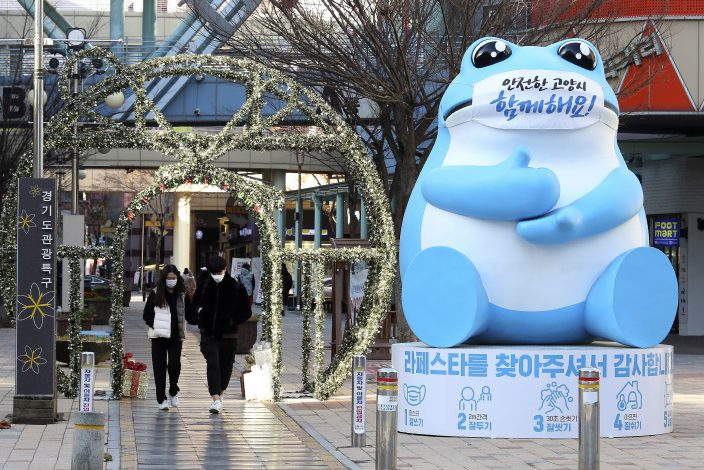 A couple wearing face masks as a precaution against the coronavirus passes by a statue with a face mask at a shopping street in Goyang, South Korea, Saturday, Nov. 28, 2020. South Korea has reported more than 500 new coronavirus cases for the third straight day, the speed of viral spread unseen since the worst wave of the outbreak in spring. The signs on the mask read "Safe Goyang City." (AP PhotoAhn Young-joon)

— India has reported 41,180 new coronavirus cases in the past 24 hours, with the daily toll staying below the 50,000-mark for the fourth week. The capital of New Delhi also got some respite as it added fewer than 5,000 cases for the first time in a month. The New Delhi government decided that half its employees, barring senior officials, will be allowed to work from home from Monday. India reported another 496 deaths in the past 24 hours, raising the death toll to 136,696. India’s coronavirus tally has crossed 9.3 million, second behind the U.S. In an effort to stop the virus from spreading, the Home Ministry allowed states to impose local restrictions.

— A Chinese factory owned by South Korean semiconductor firm SK Hynix has halted operations after an employee was found to be infected with the coronavirus. According to state-owned Xinhua News Agency, the South Korean national surnamed Han worked in a plant in the southwestern city of Chongqing. He traveled to South Korea on Thursday. He displayed no symptoms, but was found to be infected with the virus when he was tested at Incheon airport in Seoul. The factory has been closed, and employees have been isolated and tested, Xinhua reported. The hotel where the employee lived in Chongqing has also been temporarily shut and hotel employees and recent guests were tracked down and tested. Chongqing has so far tested 3,283 people, and 2,674 have been found to be negative. China reported earlier Sunday 11 new coronavirus infections on Nov. 28, all of which were imported cases. China has so far reported a total of 86,512 confirmed coronavirus infections, with 4,634 deaths.