She's fended off protesters who made a run at her husband. She's moved him farther from reporters during the coronavirus pandemic. She's supported his presidential ambitions again and again — except in 2004, when she deployed a novel messaging technique to keep Joe Biden from running.

“No,” Jill Biden, then clad in a bikini, wrote in Sharpie across her stomach and then marched through a strategy session in which advisers were trying to talk her husband into challenging Republican President George W. Bush.

Protecting Joe stands out among Jill Biden's many roles over their 43-year marriage, as her husband's career moved him from the Senate to the presidential campaign trail and the White House as President Barack Obama's vice president. She's a wife, mother, grandmother and educator with a doctoral degree — as well as a noted prankster. 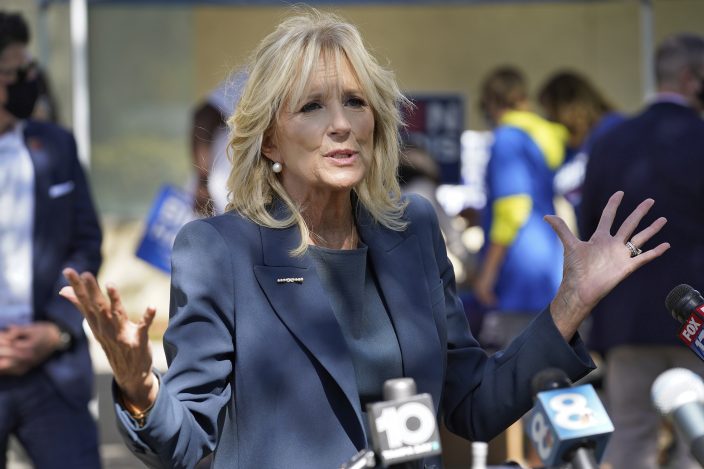 Now, with her husband on the brink of becoming the 46th president, Jill Biden is about to become first lady and put her own stamp on a position that traditionally is viewed as a model of American womanhood — whether that means hewing to old ways or finding new, activist ones, in the manner of Eleanor Roosevelt, Hillary Clinton and Michelle Obama, for example.

She intends to keep working as a college professor, which would make her the only first lady to keep her day job outside the home. And if four decades in the public eye are any indication, she'll continue being Biden's chief protector.

The role isn't completely unfamiliar territory for Jill Biden. She's been a political wife the entire time she's been married to Joe Biden. Plus, she had a bird's-eye view of what a first lady does during Obama's two terms. 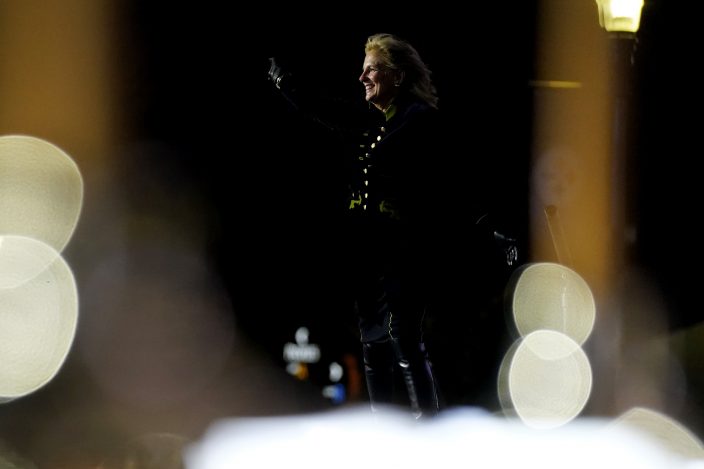 But the scrutiny level will change. And all eyes are on the incoming Biden administration to deliver what both Joe and Jill have promised — getting the coronavirus pandemic raging across the country under control.

Myra Gutin, a professor at Rider University and the author of several books about first ladies, recalled Barbara Bush telling her: “You know, when I was second lady, I could say anything I wanted, and no one really paid much attention. But the minute I became first lady, everything became newsworthy.”

Still, Jill Biden won’t have the learning curve most other new first ladies faced. “She’s been in the public eye for a long time," Gutin said. “She’s going in eyes wide open.” 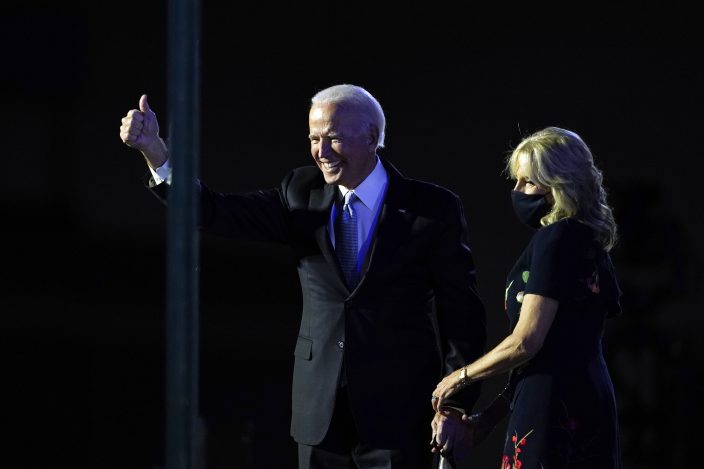 President-elect Joe Biden stands on stage with his wife Jill Biden as he gives the thumbs-up to the cheering crowd beyond the protective glass, Saturday, Nov. 7, 2020, in Wilmington, Del. (AP PhotoCarolyn Kaster)

The coronavirus has killed more than 260,000 Americans and upended much of daily life. The Bidens offered themselves as agents of comfort at a time of loss and grief, experiences they know well particularly after their son Beau Biden died of brain cancer in 2015.

Jill Biden entered her husband's life as a comfort.

Joe Biden's first wife and young daughter were killed in a car accident in 1972. Jill Biden helped raise his surviving young sons, Beau and Hunter, before giving birth to their daughter, Ashley, in 1981. She refers to all of them as her children. 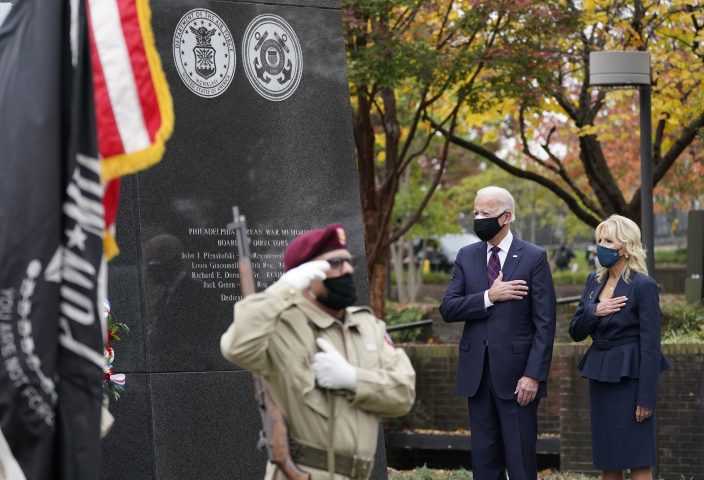 As Joe Biden commuted from Delaware to Washington while serving as a senator, Jill Biden built a career as a teacher, ultimately earning two master’s degrees and then a doctorate in education from the University of Delaware in 2007.

Throughout, Jill Biden's protective streak was notable. There she stood at his side, when Joe Biden withdrew from his first presidential bid under accusations of plagiarism. She says she emulated her mother's stoic style. Jill Biden's mother, she said, didn't even cry when her own parents died. She saw that as strength. “I decided early that I would never let my emotions rule me,” she wrote in her memoir, ”Where the Light Enters.”

“As a political spouse, I’ve found that my stoicism often serves me well,” Jill Biden wrote. “In 1988, when Joe’s first presidential campaign started to look bleak, people were constantly looking for cracks in our team. We all felt scrutinized, but I refused to show weakness.” 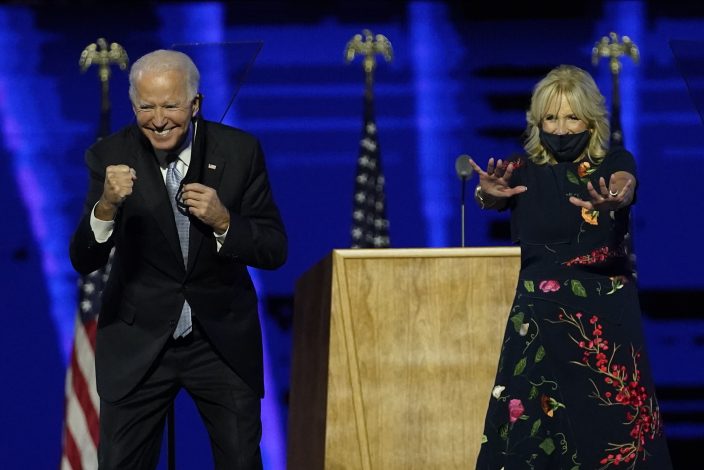 It showed early in the 2020 race when several women accused Biden of inappropriate touching. The candidate denied acting inappropriately but acknowledged that social norms had changed. He pledged that he would change, too.

“I think what you don’t realize is how many people approach Joe — men and women, looking for comfort or empathy,” she told ABC’s ”Good Morning America." “But going forward, I think he’s gonna have to judge — be a better judge — of when people approach him, how he’s going to react. That he maybe shouldn’t approach them.” 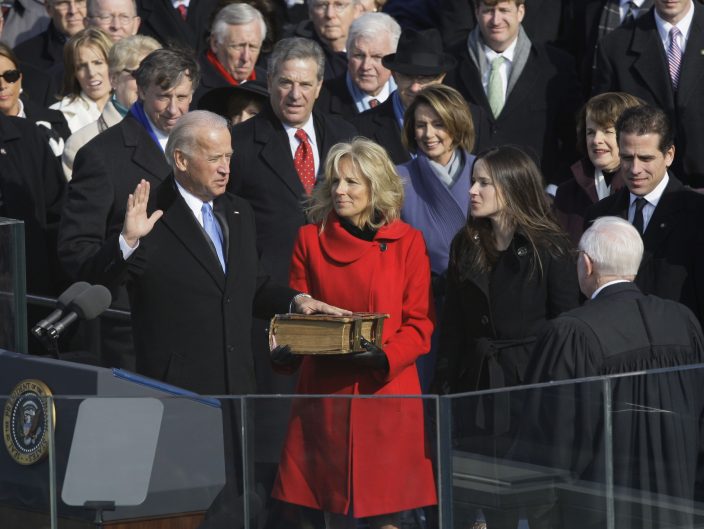 Vice President-elect Joe Biden, with his wife Jill at his side, takes the oath of office from Justice John Paul Stevens, as his wife holds the Bible at the U.S. Capitol in Washington, Tuesday, Jan. 20, 2009. (AP PhotoElise Amendola)

She recalled a time in her life when she had been treated inappropriately and didn't speak up.

“I can remember specifically — it was in a job interview," Jill Biden said. "If that same thing happened today, I’d turn around and say, ‘What do you think you’re doin’?”

She's quick to rally to her husband's side, sometimes physically. 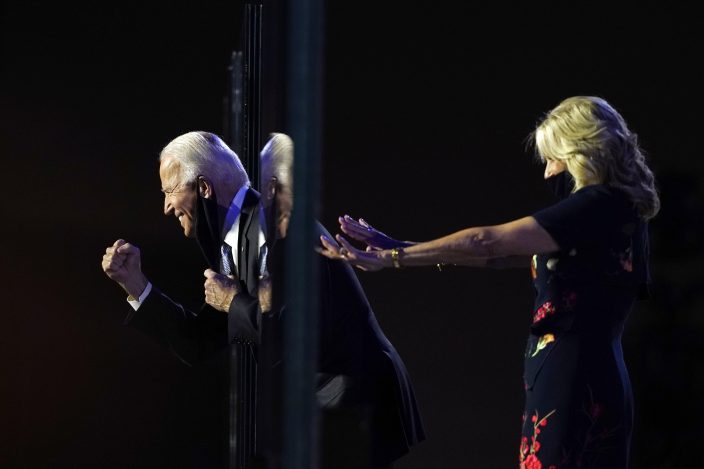 President-elect Joe Biden stands on stage with his wife Jill Biden as he leans past the protective glass, Saturday, Nov. 7, 2020, in Wilmington, Del. (AP PhotoCarolyn Kaster)

In New Hampshire in February, a man tried to cross into the roped-off area near Joe Biden. In a flash, Jill Biden crossed behind her husband and put her arms around the man, turned him around and helped push him away.

A month later in Los Angeles, she similarly blocked one protester, then a second one, who had stormed the stage while Joe Biden was delivering his Super Tuesday victory speech.

When the first one approached waving an anti-dairy sign and yelling, Jill Biden stepped between the protester and her husband. She did the same with the second one, this time putting her arms up to block the intrusion. 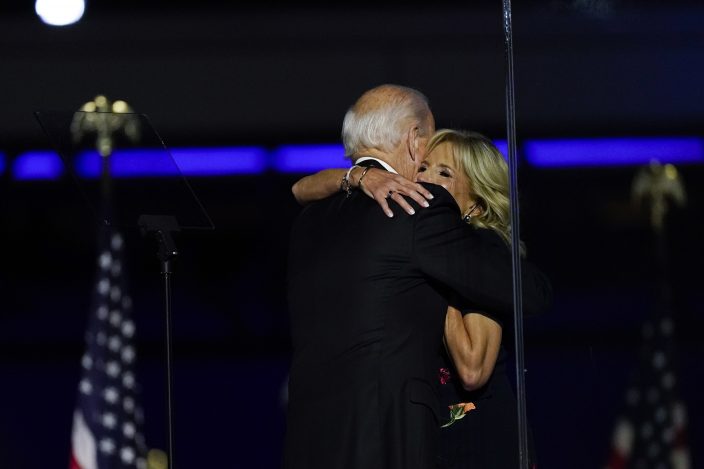 Both were removed without coming in contact with the candidate. After the 27-second confrontation, Jill turned around saying, “We're okay,” and encouraged Joe to keep the event going. The Bidens then said it might be time for Secret Service protection, and they got it soon after.

She's been protective during the pandemic. 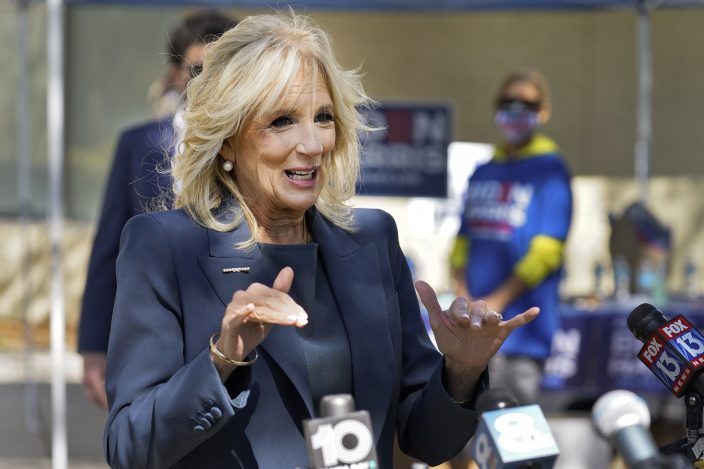 On Oct. 5 at New Castle Airport in Delaware, she moved her husband back from members of the media as he spoke outside his campaign plane before a trip to Miami.

Like many American families, the Bidens spent Thanksgiving differently this year. They stayed at their house in Rehoboth, Delaware, rather than their usual “Nana-tucket,” as her grandchildren have called the Massachusetts island where the Bidens started going early in their marriage to establish a new holiday tradition.

In 2020, instead of the usual sprawling family tableau, their daughter and her husband were the only Biden visitors to the house in Delaware. A Zoom call with the larger group was on the evening's agenda.

Look, too, for Jill Biden to try to keep things light.

“She's not your average grandmother,” granddaughter Naomi said on a video shown at the Democratic National Convention, recalling that Jill Biden once woke her up at 5 a.m. on Christmas morning to go “soul cycling.”

“She’s a prankster, she’s very mischievous,” Naomi added with a grin. “When she goes on a run, sometimes she'll find, like, a dead snake and she’ll pick it up and put it in a bag and use it to scare someone.”

Mine OK'd in Trump's last days may boost Bide ...

One of the keys to President Joe B ...

When Kylian Mbappe's two goals too ...