Ireland beat a much-improved Georgia by a patchy 23-10 and completed the group stage of the Autumn Nations Cup at Lansdowne Road on Sunday.

Ireland finished second to England in their group and will play Scotland, the runner-up in the other group, for third place next weekend.

England hosts the inaugural final against France at Twickenham, Wales and Italy meet for fifth, and Georgia and Fiji, which has yet to play because of a coronavirus outbreak in its camp, play for seventh. 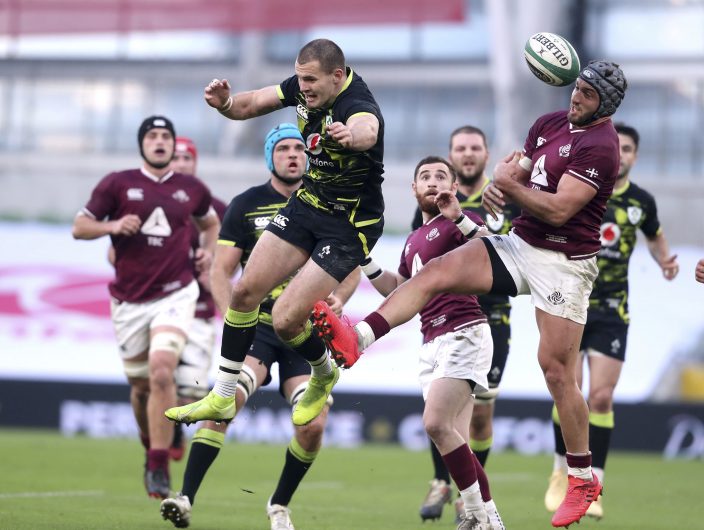 Ireland's Jacob Stockdale and Georgia's Beka Gorgadze compete for the ball in the air during their Autumn Nations Cup rugby union match at the Aviva Stadium in Dublin, Ireland, Sunday Nov. 29, 2020. (Niall CarsonPA via AP)

An experimental Ireland deserved to lead Georgia 20-7 at halftime, the highlight of which was Georgia’s first points in the tournament, a brilliant try by center Giorgi Kveseladze.

The second half, however, was a stop-start stalemate as the physical Georgians’ grew in confidence but were prone to errors, and Ireland’s effort became more disjointed and contained.

Ireland scored both of its tries in the first half, had another disallowed and had try attempts held up on the line at the end of each half. 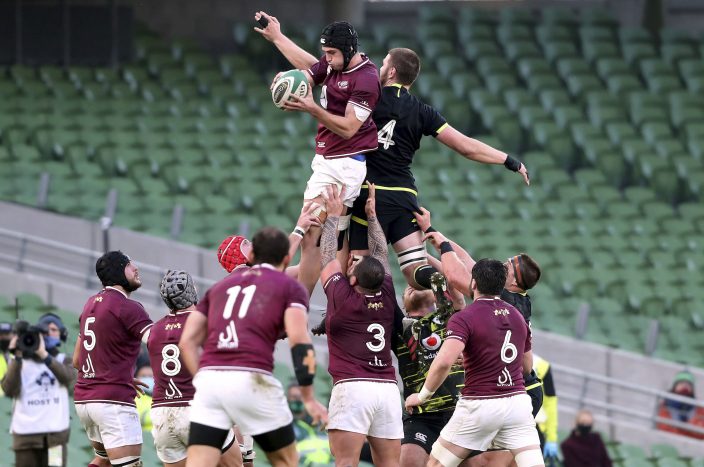 But the best try was Georgia’s and worth waiting for after nearly three hours of tournament play without a score.

Kveseladze burst through a gap on halfway with an inside pass from Soso Matiashvili, slipped one defender, dummied Stockdale, twisted up Burns and slid in by the left post with Stuart McCloskey on his back. 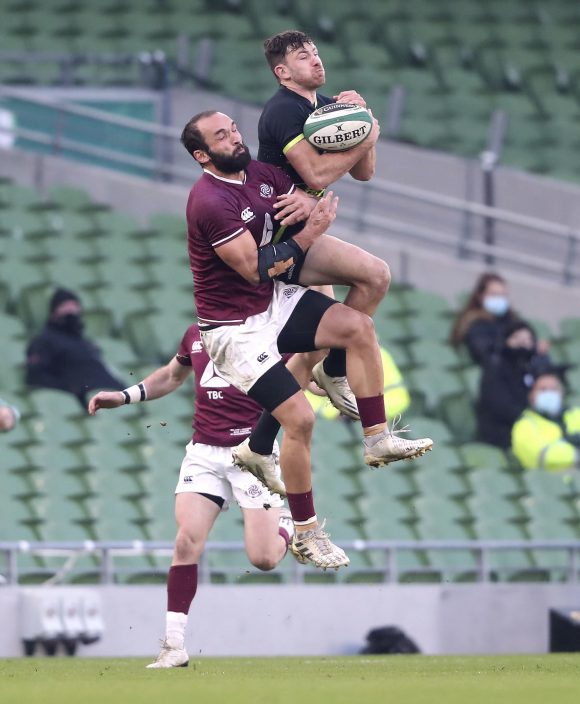 Ireland's Hugo Keenan attempts to catch a high ball during the match against Georgia during their Autumn Nations Cup rugby union match at the Aviva Stadium in Dublin, Ireland, Sunday Nov. 29, 2020. (Niall CarsonPA via AP)

At the end of the half, a 50-meter try by McCloskey in his first test in two years was rubbed out because of a forward pass and captain James Ryan was held up by Kveseladze.

After halftime, each side added only a penalty kick and emptied the benches; Ireland gave a debut to back Shane Daly, and Georgia debuted 18-year-old fullback David Niniashvili and 20-year-old scrumhalf Mikheil Alania.

At the end, Ireland No. 8 CJ Stander charged twice at the tryline and was denied; being held up by Alania and flanker Tornike Jalagonia, then repelled by Kveseladze, who shoved him back.