Vanderbilt's Sarah Fuller, the most famous walk-on in college football this season, isn't ready to walk away from the sport.

After the soccer player-turned kicker became the first woman to play in a Power Five conference football game, Fuller said she wants to remain a member of the team.

“I'll stay around as long as they want me, till they like, kick me off,” Fuller said Sunday. “So I'm here for the long run.” 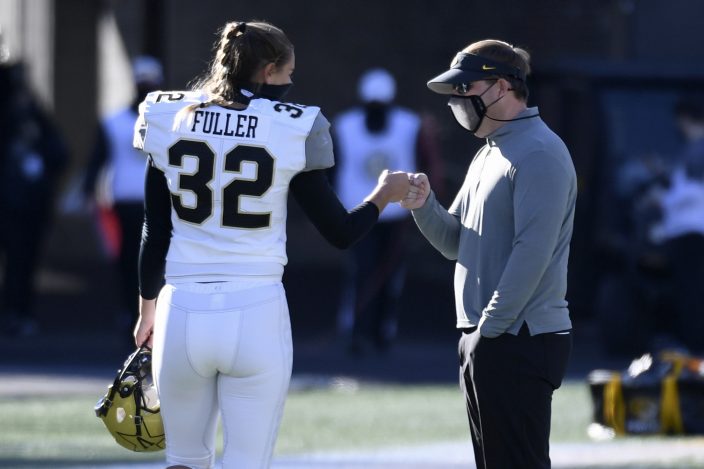 Fuller stayed in the COVID-19 testing protocol and was attending meetings Sunday with Vanderbilt (0-8), a day after making history by kicking off to open the second half of a 41-0 loss to Missouri. Fuller executed a squib kick that traveled 30 yards before the ball was smothered by Missouri with no chance for a return.

Vanderbilt coach Derek Mason, who was fired Sunday, turned to Fuller because COVID-19 issues had left the team with few options for kicking specialists. Graduate transfer Oren Milstein, a 5-foot-7 kicker, had opted out before the season.

The other kickers on the Vanderbilt roster are 6-foot Pierson Cooke and 6-1 Wes Farley. Vanderbilt is just 3-of-7 on field goals this season with Cooke's 41-yarder at Mississippi State the longest made.

Vanderbilt does not have a men’s soccer team and the football team wanted to add an athlete already in the school’s COVID-19 protocols.

Mason said Fuller was the best option and on Saturday she was the only kicker suited up for the Commodores.

On Sunday, Fuller said she spoke with special teams coordinator Devin Fitzsimmons about staying with the team and he was in favor of it. Fuller said her longest field goal in practice last week was 38 yards, and she believes she can improve as a kicker with more reps.

“I asked for some film on some NFL kickers that are comparable to how I kick so I can refine that," Fuller said.

Vanderbilt visits Georgia on Saturday, and school officials are hoping to reschedule a final home game against Tennessee that was postponed by the Southeastern Conference.

Fuller was trending on social media during and after Saturday's game. People weighed in both cheering and criticizing the 6-foot-2 senior goalkeeper for making the football team less than a week after helping Vanderbilt win the Southeastern Conference women's soccer tournament title.

Billie Jean King was among those supporting Fuller with a tweet noting more sports history had been made.

“Congratulations to @SarahFuller_27, the women players who came before her, the athletes of women’s football, and all those working on both the sidelines and back offices for blazing trails for the next generation,” King wrote.

Fuller said she grew up with the U.S. women's national soccer team as her role models. That made a tweet of support from Mia Hamm, who wrote on Twitter that she watched with her daughters as Fuller made history, also stand out amid the social media flood.

But as an athlete, Fuller said she's used to taking criticism and being able to ignore people whose opinions aren't important. Being an athlete at a Division I program, regardless of sport means having a strong mental attitude.

“All these little comments and people saying, you know, whatever, it’s nothing because they don’t understand how difficult it can be to just even get to the point of winning an SEC championship,” Fuller said. "And it was just, I mean, luck of the draw that I happened to be available to be a kicker.”