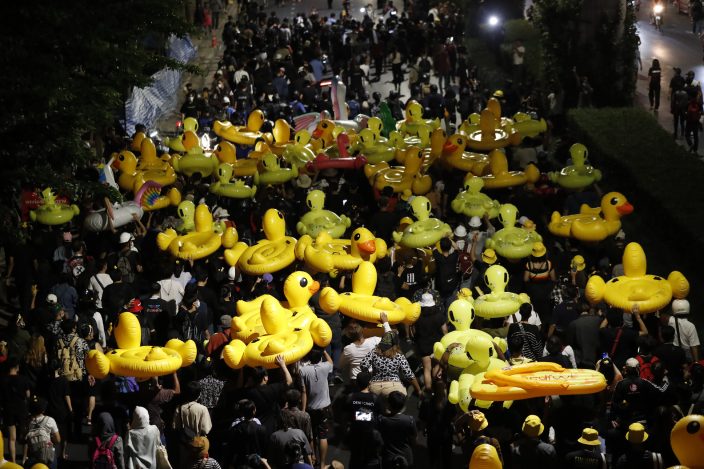 Protesters carry inflatable yellow ducks, which have become good-humored symbols of resistance during anti-government rallies, while marching towards the base of the 11th Infantry Regiment, a palace security unit under direct command of the Thai king, Sunday, Nov. 29, 2020 in Bangkok, Thailand. Pro-democracy demonstrators are continuing their protests calling for the government to step down and reforms to the constitution and the monarchy, despite legal charges being filed against them and the possibility of violence from their opponents or a military crackdown. (AP PhotoSakchai Lalit)

JILL BIDEN — Protecting Joe Biden stands out among Jill Biden’s many roles over their 43-year marriage, as his career moved him from the Senate to the presidential campaign trail and the White House as President Barack Obama’s vice president. She’s a wife, mother, grandmother and educator with a doctoral degree — as well as a noted prankster. Now, with her husband on the brink of becoming the 46th president, Jill Biden is about to become first lady and put her own stamp on a position that traditionally is viewed as a model of American womanhood. By Laurie Kellman. SENT: 1,150 words, photos.

ELECTION 2020-GEORGIA-FAITH-POLITICS — As Georgia becomes the nation’s electoral hot spot heading into Senate runoffs in January that will determine control of the Senate, religious organizing is heating up, too. Liberal faith-based groups are promoting the two Democrats, Rev. Raphael Warnock and Jon Ossoff, as a ticket of sorts, aligned on the values of their respective Black and Jewish religious traditions. Conservative Christians are mobilizing on behalf of GOP Sens. David Perdue and Kelly Loeffler. By Ben Nadler and Elana Schor. SENT: 990 words, photos. This story is the Monday Spotlight. 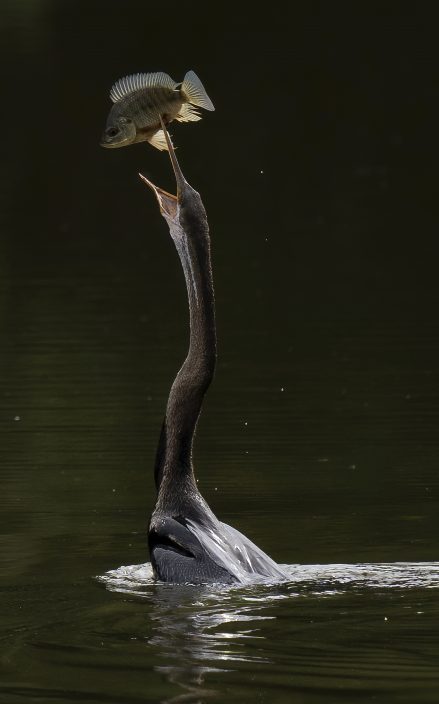 An Oriental Darter (Anhinga melanogaster) tosses up its catch of a small fish at a lake outside Putrajaya, Malaysia, on Sunday, Nov. 29, 2020. (AP PhotoVincent Thian)

IRAN — An opinion piece published by a hard-line Iranian newspaper suggests Iran should attack the Israeli port city of Haifa if Israel carried out the killing of the scientist who founded the Islamic Republic’s military nuclear program in the early 2000s. By Amir Vahdat and Jon Gambrell. SENT: 830 words, photos.

VIRUS OUTBREAK — The nation’s top infectious disease expert said Sunday that the U.S. may see “surge upon a surge” of the coronavirus over the coming weeks, and he does not expect current recommendations around social distancing to be relaxed before Christmas. By Tamara Lush. SENT: 880 words, photos.

AFGHANISTAN — At least 34 people were killed on Sunday in two separate suicide bombings in Afghanistan that targeted a military base and a provincial chief, officials say. By Rahmatullah Nekzad and Tameem Akhgar. SENT: 420 words, photos. 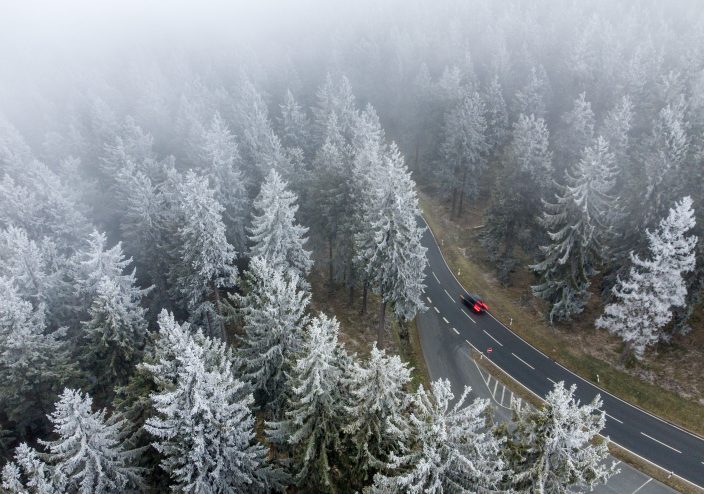 Frozen fog covers the trees in the Taunus region near Frankfurt, Germany, on a cold Sunday, Nov. 29, 2020. (AP PhotoMichael Probst)

BILL COSBY — In taking Bill Cosby’s appeal of his sexual assault conviction, Pennsylvania’s supreme court appears eager to clear up the law on when a jury should hear about someone’s past. Investigators say it can be crucial to show a signature crime pattern, but defense lawyers say it often amounts to character assassination. By Maryclaire Dale. SENT: 860 words, photos. 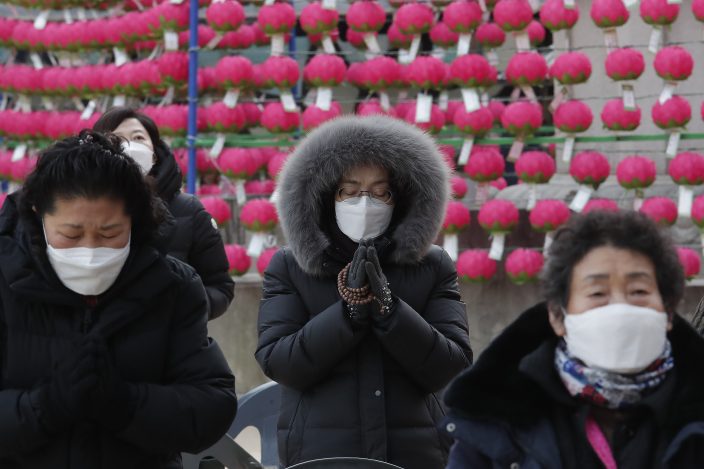 Parents wearing face masks as a precaution against the coronavirus pray during a special service to wish for their children's success in the upcoming college entrance exam on Thursday, Dec. 3, at the Jogye Temple in Seoul, South Korea, Sunday, Nov. 29, 2020. South Korea is shutting down indoor gyms offering intense workout classes and banning year-end parties at hotels in the greater Seoul area to fight the virus. Prime Minister Chung Sye-kyun said Sunday. (AP PhotoAhn Young-joon) 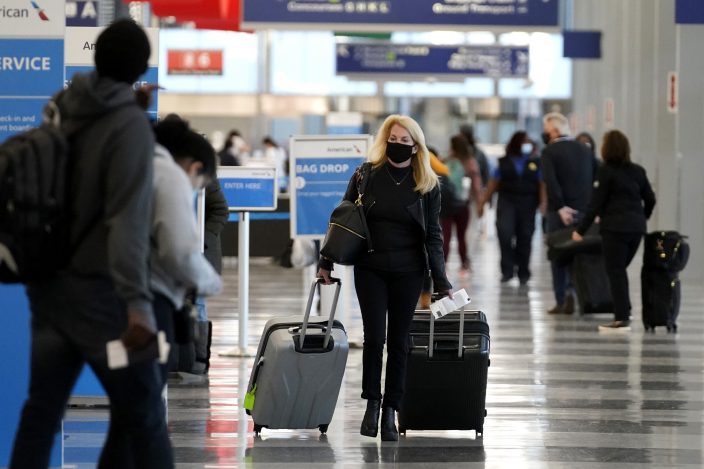 A traveler wears a mask as she walks through Terminal 3 at O'Hare International Airport in Chicago, Sunday, Nov. 29, 2020. Friday's total of new cases is the next-to-lowest daily number in the past 12 days, but Illinois state officials are bracing for another surge after many people around the country traveled for Thanksgiving and celebrated with family and friends. (AP PhotoNam Y. Huh) 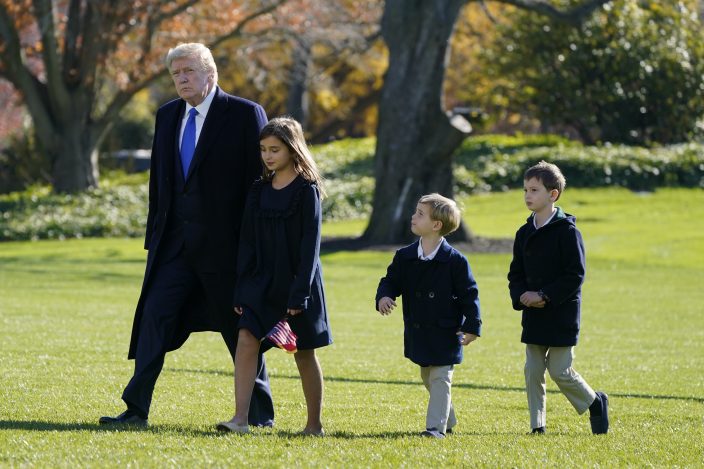 President Donald Trump walks with his grandchildren Arabella Kushner, Theodore Kushner and Joseph Kushner on the South Lawn of the White House in Washington, Sunday, Nov. 29, 2020, after stepping off Marine One. President Trump is returning from Camp David. (AP PhotoPatrick Semansky)

VIRUS OUTBREAK-BRITAIN-VACCINE — Britain says it has secured 2 million more doses of a promising coronavirus vaccine as the country aims to launch an inoculation program within days. SENT: 750 words, photos.

VIRUS OUTBREAK-HAWAII — A group of Hawaii leaders is launching a campaign Sunday to promote the islands as an appealing location for a remote office with a view. Now that many companies, especially in the tech industry, allow employees to work from anywhere during the pandemic, they hope Hawaii will be alluring. SENT: 1,150 words, photos.

VIRUS OUTBREAK-NEW YORK — New York City will reopen its school system to in-person learning and increase the number of days a week many children attend class even as the coronavirus pandemic intensifies in the city. Mayor Bill de Blasio announced Sunday that some elementary schools and pre-kindergarten programs will resume classes Dec. 7. Others will take longer to reopen. SENT: 330 words, photo.

VIRUS-OUTBREAK-FRANCE — France’s highest administrative court ordered a rethink of a 30-person attendance limit for religious services put in place by the government to slow down the spread of coronavirus. SENT: 450 words, photos.

VIRUS OUTBREAK-CHRISTMAS MARKETS-PHOTO GALLERY — European Christmas markets have joined the long list of annual traditions that were canceled or scaled back this year because of the coronavirus pandemic. SENT: 200 words, photos.

TRUMP-FACT CHECK — President Donald Trump clung to false notions that Joe Biden had stolen the presidential election, citing thousands of votes magically switched to the president-elect and poll watchers barred on Election Day, neither of which happened. Even after his administration agreed to a formal transition of president power to Biden, Trump wrongly insisted in an interview that he was a victim of widespread election fraud. A look at the claims and reality. By Hope Yen and Jill Colvin. UPCOMING: 950 words by 4 p.m., photos.

ELECTION 2020-WISCONSIN-RECOUNT — Wisconsin has finished its recount of votes cast in this month’s presidential election, with only miniscule changes in the results that saw Democrat Joe Biden defeat Republican Donald Trump in the battleground state. SENT: 440 words, photo.

TRUMP-RUSSIA-PROBE-LAWSUIT — A former Trump campaign associate who was the target of a secret surveillance warrant during the FBI’s Russia investigation says in a federal lawsuit that he was the victim of “unlawful spying.” SENT: 470 words, photos.

ETHIOPIA-MILITARY-CONFRONTATION — Ethiopia’s announcement that it has completed its military offensive in its defiant Tigray region “does not mean the conflict is finished,” the U.N. refugee chief said Sunday, adding he is very concerned about the fate of nearly 100,000 Eritrean refugees there amid reports that some have been abducted. SENT: 750 words, photos.

NIGERIA-VIOLENCE — Suspected members of the Islamic militant group Boko Haram killed at least 40 rice farmers and fishermen in Nigeria as they were harvesting crops in the country’s northern state of Borno, officials said. One said the death toll could rise to about 60 people. SENT: 420 words, photos.

POLAND-ABORTION-PROTEST — Polish police are studying video footage to understand why a police officer targeted a member of parliament with tear gas during a protest, a police official said. SENT: 230 words, photos.

BRAZIL-MAYORAL-ELECTIONS — The mayor of the largest city in the Americas is trying to fend off a reelection challenge from the socialist leader of a squatters movement as 57 Brazilian cities held runoff elections on Sunday. SENT: 520 words, photos. UPCOMING: Polls close at 3 p.m.; first results likely within an hour of closing.

BELARUS-PROTESTS — A human rights group in Belarus says over 180 people have been detained during Sunday protests against the country’s authoritarian president, who won his sixth term in office in a vote widely seen as rigged. SENT: 350 words.

INDONESIA-VOLCANO — A volcano in eastern Indonesia erupted, sending a column of ash as high as 4,000 meters (13,120 feet) into the sky and prompting the evacuation of thousands of people. SENT: 230 words.

THAILAND-POLITICS — Thailand’s pro-democracy activists took to Bangkok’s streets again Sunday, this time to protest the army as they push forward with their campaign for sweeping reforms, including to the nation’s monarchy. SENT: 600 words, photos.

MONTENEGRO-SERBIA-TENSIONS — Montenegro’s prime minister-designate has said he regrets the outgoing government’s decision to expel the Serbian ambassador just days before the planned inauguration of a new, pro-Serb Cabinet in the small Balkan state. SENT: 300 words, photos.

POLICE SHOOTING-TEXAS — Police in the West Texas community of San Angelo fatally shot a man early Sunday after he approached officers with a knife during a domestic violence call, a police spokesman said. SENT: 180 words, photos.

FOUR-DEAD-FLORIDA — Man charged in family’s death in their home near Disney World: ‘I wasn’t there’. SENT: 400 words.

SWITZERLAND-BIG BUSINESS — A proposal that could have stiffened penalties against companies based in Switzerland if they violate human rights or harm the environment abroad has failed in a Swiss referendum. SENT: 340 words.

FILM-BOX OFFICE — Testing a novel release strategy, Universal Pictures’ animated sequel “The Croods: A New Age” had one of the best opening weekends of the pandemic, grossing $14.2 million over the Thanksgiving holiday weekend. It will move to video on demand in 17 days, shorter than the traditional 90-day window. SENT: 430 words, photos.

FBC-T25-COLLEGE FOOTBALL POLL — Alabama is the unanimous No. 1 in The Associated Press college football poll again as the top eight teams in the rankings held steady for the fourth week in a row. SENT: 520 words, photos.