Josh Allen threw for a touchdown and ran for another score for the AFC East-leading Bills (8-3), who hung on after nearly blowing an 18-point third-quarter lead. Receiver Cole Beasley also completed a touchdown pass.

Buffalo turned the ball over on three consecutive possessions, but its defense limited Los Angeles to Michael Badgley’s 27-yard field goal during the key stretch. 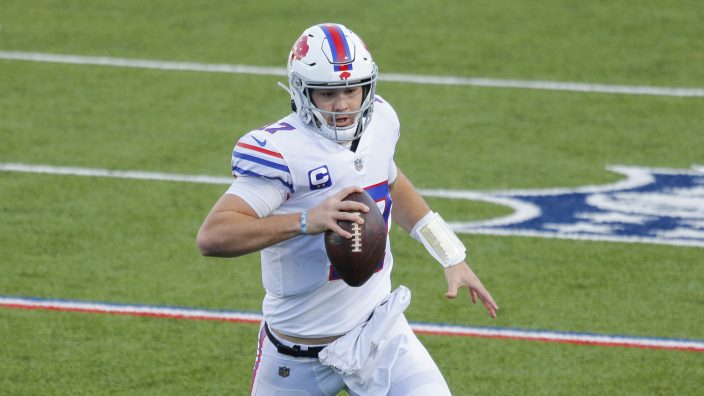 Buffalo’s three drives ended with running back Devin Singletary losing a fumble at midfield, Allen muffing a snap at the Chargers 22, and then Allen throwing an interception to Michael Davis.

Two plays after the Chargers regained the ball at their 44, Justin Herbert faced third-and-6 when he forced a pass over the middle intended for tight end Hunter Henry, only to have White jump in front of the ball.

The Bills responded with a six-play, 40-yard drive that ended with Bass' field goal with 3:26 remaining. 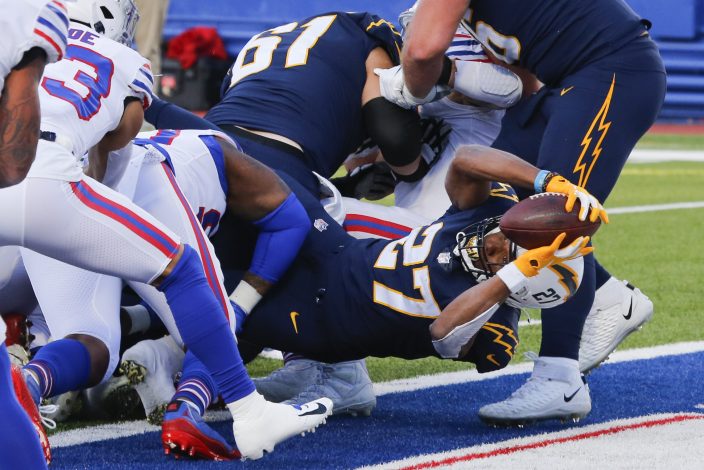 Los Angeles Chargers running back Joshua Kelley (27) dives in for a touchdown during the second half of an NFL football game against the Buffalo Bills, Sunday, Nov. 29, 2020, in Orchard Park, N.Y. (AP PhotoJeffrey T. Barnes)

The Chargers dropped to 3-8.

Herbert finished 31 of 52 for 316 yards, upping his season total to 3,016 and joining Kansas City's Patrick Mahomes as the only players to top 3,000 yards passing in their first 10 career starts. Herbert was limited to one touchdown, a 5-yarder to Keenan Allen.

Los Angeles running back Austin Ekeler returned after missing six games with a hamstring injury. He finished with 44 yards rushing and 11 catches for 85 yards. 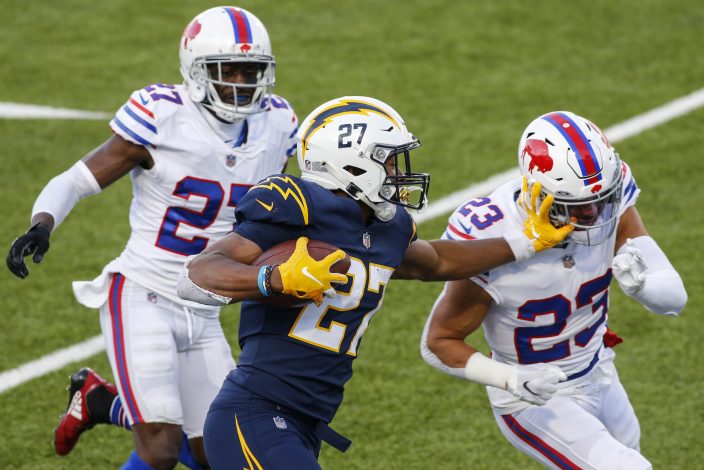 A game between two of the NFL’s top young quarterbacks was instead overshadowed by defense.

Charger defensive end Joey Bosa had a career-best three sacks while also recovering a fumble. Bosa upped his career total to 47 1/2 and moved into fifth on the franchise list, a half-sack ahead of Junior Seau. 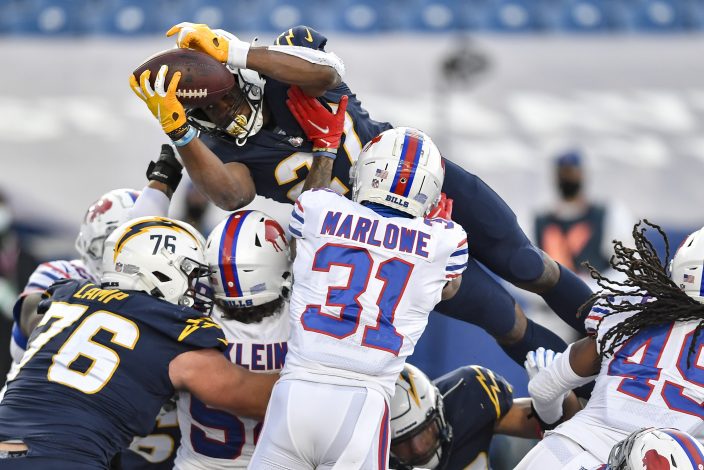 Los Angeles Chargers running back Joshua Kelley (27) dives in for a touchdown during the second half of an NFL football game against the Buffalo Bills, Sunday, Nov. 29, 2020, in Orchard Park, N.Y. (AP PhotoAdrian Kraus)

Buffalo linebacker A.J. Klein was credited with a team-best 14 tackles and 1 1/2 sacks.

The Chargers, who also scored on Josh Kelley’s 1-yard plunge, were limited to two touchdowns and a field goal on five drives that crossed midfield. That included Kelley getting stopped on fourth-and-1 at Buffalo’s 25 on the opening play of the fourth.

The final minute featured a comedy of errors in how the Chargers mismanaged the clock. They had the ball at the Buffalo 2 after Herbert completed a 55-yard pass to Tyron Johnson. 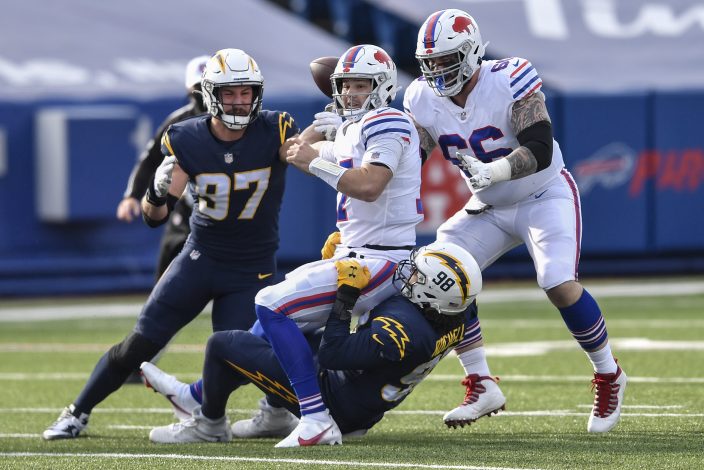 With no timeouts and the clock down to 25 seconds, the Chargers elected to run with Ekeler being stopped at the 1. The clock ran down to 6 seconds before Herbert threw an incompletion. The game ended with Herbert being stopped on a keeper up the middle.

The Bills were coming off their bye following a 32-30 loss at Arizona, which was decided on Kyler Murray’s 43-yard touchdown pass to DeAndre Hopkins with two seconds remaining.

Buffalo’s defense once again was unable to prevent a late-minute deep pass, with Herbert finding Johnson on a pass that deflected off the hands of safety Jordan Poyer.

The Bills never trailed after Allen capped an opening drive with a 2-yard touchdown pass to tight end Dawson Knox. Buffalo needed only four plays to march 63 yards in a drive that was aided by a 47-yard pass interference penalty against safety Rayshawn Jenkins, who was attempting to cover Stefon Diggs.

The Bills resorted to trickery for a second consecutive game, with Beasley getting a pitch from Allen and then lofting a 20-yard pass to wide-open rookie Gabriel Davis in the end zone early in the second quarter. It came after receiver Isaiah McKenzie completed a touchdown pass to Allen against Arizona.

Chargers: Right tackle Bryan Bulaga was active but did not play because of an illness. ... LB Denzel Perryman hurt his back after a going head over heels in making a diving attempt to tackle Beasley in the second quarter. ... Casey Hayward (groin) had his streak of playing 106 consecutive games end, which stood as the NFL’s longest active among cornerbacks. His streak dated to 2013, Hayward’s second season with Green Bay.

The game was the first in the NFL’s Super Bowl era to feature quarterbacks 24 or younger entering Week 12 with a 100-plus passer rating with a minimum of eight starts. Herbert ranks first among NFL QBs 24 and younger with a 104.7 passer rating, while Allen is second at 103.2.

Bills: Scheduled to travel to play San Francisco for prime-time game on Dec. 7, though location is uncertain after Santa Clara County banned contact sports teams from holding games and practices for the next three weeks.

EU lashes Bosnia for failing to properly care for migra ...