Jon Gruden felt an apology was appropriate after his Raiders set season highs for penalties, turnovers and sacks allowed.

The Las Vegas coach also was looking to quickly erase Sunday's 43-6 loss to the Atlanta Falcons.

“I apologize to the Raider nation and really compliment the Falcons,” Gruden said. “They played a hell of a football game and we did not.” 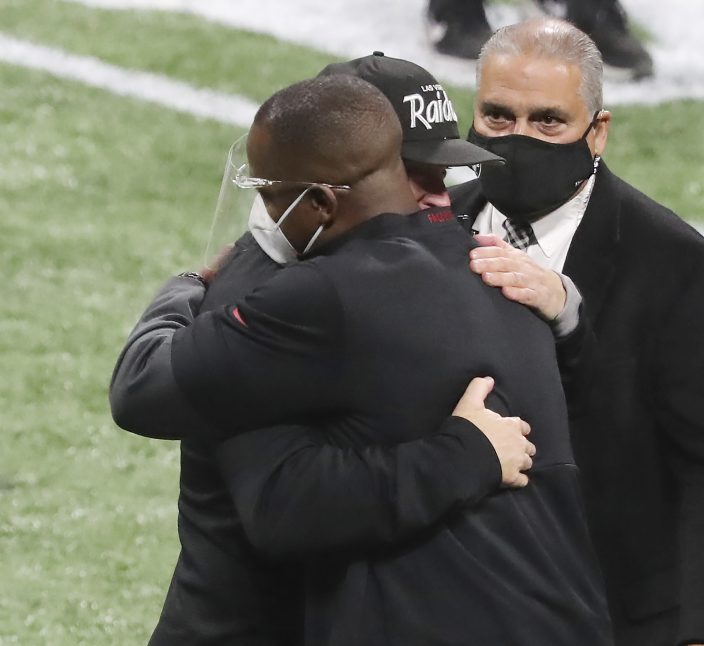 Atlanta Falcons head coach Raheem Morris, left, and Las Vegas Raiders head coach Jon Gruden greet each other with a hug after the Falcons defeated the Raiders in an NFL football game on Sunday, Nov 29, 2020, in Atlanta. (Curtis ComptonAtlanta Journal-Constitution via AP)

It was an especially ugly outing for quarterback Derek Carr, who was sacked five times, threw an interception that was returned by Deion Jones for a touchdown and had three of the team's four lost fumbles.

“I didn’t think personally we had our best week of practice,” Carr said. “Personally I felt we were a little flat. Clearly that was the case in the game.”

Gruden said he's not worried about the ugly loss having a carryover effect with Carr or the team.

“This is a tough business,” Gruden said. “He’s been through a lot. He’ll be fine.”

The consecutive losses raised concerns the Raiders (6-5) could be bound for a repeat of their poor finish in 2019. One year ago, the Raiders also were 6-4 before finishing 7-9.

Carr said he believes this team is different and will regroup. Las Vegas' next game is at the winless New York Jets.

“We can grit our teeth like I think we will,” Carr said.

Asked about the 2019 finish, Carr said, “It doesn’t feel like that. It’s not the same, for whatever that’s worth, it’s not. I know that feeling. I’ve seen that feeling of frustration.”

Gruden said the loss, the worst in his second tenure with the team, was simply the result of Las Vegas playing poorly against a Falcons team that played well.

Las Vegas was called for 11 penalties for 141 yards, adding more barriers to success behind the turnovers.

“When you turn the ball over five times and have 120 yards of penalties, you have no chance,” Gruden said.

The Raiders' problems began on their first possession when Josh Jacobs was stopped by Jones for no gain on a fourth-down run from the Las Vegas 45.

On the Raiders' next play, Carr fumbled when hit by Falcons linebacker Foye Oluokun.

“It hadn’t felt like this in a while,” Carr said. “It’s a gut punch, for sure. ... We got punched in the face and it just kept happening.”

For Las Vegas, one bad play seemed to set the stage for another.

“This is one of those where you want to watch the film and correct it and burn the film because that’s not who we are,” Carr said.

Carr completed 22 of 34 passes for 215 yards with one interception. Backup Nathan Peterman finished the game.

“I didn’t feel like we showed up,” said Hunter Renfrow, who led Las Vegas with seven catches for 73 yards. “It was one thing after another, whether it was a flag or a turnover. We just never got it going. ... It was surprising a little bit because we know we’re better than that.”

Jacobs ran for 27 yards on seven carries. The Raiders were successful on only 3 of 12 third-down plays.

Paradise is not always peaceful wh ...

Even after canceling the Tournamen ...